From the Tech Vault Dept.: For purely nostalgic purposes, let’s look back sixteen years at where computers were in terms of processing speed, and thank heavens we no longer have to deal with this. We can relax knowing that – what? Intel has announced a new chip architecture? My computer suddenly seems so slow!

LIKE A STUBBORN SERVANT, your old 486 won’t do Windows. That is, it bogs down sluggishly when you try to run Windows 95. But you bought that particular computer with the idea of taking it along an upgrade path. You already were hearing about faster processors when you unpacked the system; now you know it’s finally time to grab more speed. 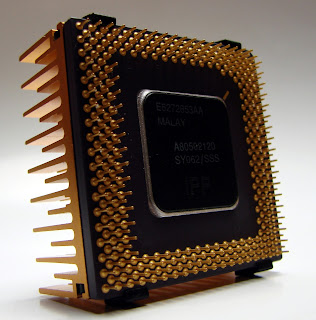 It’s the easiest computer upgrade you can make. Pop out your old CPU chip, slip in the new one. Five minutes, tops. A little longer if you have to adjust a motherboard jumper or two.

Is it the shrewdest and/or most economical way to get more speed? Probably. If you’re running a 486DX/33, definitely. Lots of components conspire to slow your computer, however, so make a checklist of what’s in there before you go shopping.

Although upgrade options are available for 386 and (yes) 286 machines, so many bottlenecks boondoggle those systems that a complete motherboard upgrade is the way to go. On the other hand, if you have the uneasy feeling that your aging Pentium is moving kind of slow, take heart. A new batch of upgrade chips are available to kick more speed into it, too.

Let’s make sure it’s the CPU you need to upgrade, then discover the possibilities.

Are you sure it’s the CPU?
Memory mongering

There’s more to system speed than a fast CPU. While it may be the most economical one-shot upgrade, keep in mind that older components might be hampering your system’s performance.

If you’ve got 8 MB of memory, up the count to 16 MB. (If you’ve only got room for 8 MB, see The Eight-SIMM Motherboard Dilemma, below.)

A new hard disk is one of the most obvious improvements you can make, especially if Windows 95 seems to be taking over all available space on your old one. But it’s not just size of the disk that’s helpful. New technologies that are helping hard disk prices go down are also speeding performance, and these days they’re faster than ever.

It’s not enough to have local bus slots on your motherboard – you need to fill them. The most common type of hard disk runs on an IDE controller, which is available in a local bus version. But think about an enhanced IDE card, which will still run your old disk, get you ready for a newer, faster disk, and let you run two other IDE devices (such as a tape backup or CD-ROM player) as well.

Which means it may also be time for that faster CD-ROM drive. With 6X models hitting the market, the quad speed drives are much more affordable.

Local bus video is a must for fast Windows performance, and each year brings us a wave of ever-more-powerful video accelerators with onboard processing. Video cards now sport internal data paths of 64 bits or more, which are making mincemeat out of the test scores.

Don’t forget, too, that newer equipment is much more energy efficient, and the newest motherboards and monitors let you power them down after so much inactivity. Cut back on the electric bill and you might save up enough for that next system sooner than you think!

The Eight-SIMM Motherboard Dilemma
New board of direction

Here’s a two-in-one solution. Your old motherboard has eight 1 MB 30-pin SIMMs in eight slots. And that’s it. To upgrade to 16 MB, you’d have to ditch at least 4 MB of RAM and still buy all 16 MB. Get a new motherboard instead. Several direct-mail companies advertise dual-slot boards, giving you eight 30-pin slots and two 72-pin slots. Keep your current memory, add two 4 MB modules, and get VESA local bus slots for your eventual controller and video card upgrades. You probably can swing a deal to get the upgrade CPU of your choice installed for you, too. Keep in mind, too, that newer motherboards have faster cache systems and support chipsets, which contribute to overall speed.

The earliest upgrade for a 486DX-33 system was the DX/2-66. It didn’t really double performance, and now it’s not worth considering. Intel is discontinuing them this year. Jump to a DX/4-100. Don’t let the 4 fool you, though. It really should be a 3, because this is a clock-tripling chip.

Only the internal processing of instructions is speeded up, deep inside the CPU’s brain, so you get faster results. But those results aren’t fully supported by the rest of the motherboard. It’s like drinking a few cups of espresso to provoke faster creativity of your novel, then discovering that you still can’t type any faster.

Intel and its rivals, AMD and Cyrix and Texas Instruments, have competing upgrade options. Intel sells them directly; the others are resold through companies like Kingston Technology and Evergreen Technologies, which add cooling fans and other packaging goodies. Kingston’s package, for example, includes a tool for removing your old 486 chip in case you don’t have a zero-insertion force (ZIF) slot, and software to view benchmark results.

How fast to go?

Kingston recently introduced the TurboChip 133, using AMD’s Am5x86-P75 CPU to quadruple the clock speed of most 486-based systems. Like its predecessor, the AMD Am486DX4-100-based TurboChip, it’s cooled by a fan perched on the back of the chip that draws power from the chip socket. But whereas the TurboChip listed for just under $300 when it was introduced a year ago, the TurboChip 133 has a suggested retail price of $139.

Prices just fell on the Gainbery Computer Products line of Cyrix-based processors, which matches the range of AMD’s and Intel’s offerings. Also included in the Gainbery product line are CPUs to replace 60 MHZ and 66 MHZ Pentium chips.

There’s not a vast performance difference between tripling and quadrupling the clock speed of a 486DX-33, although the architecture of a 5x86 or Pentium OverDrive chip speeds your math-intensive work. If budgeting is tight, you’ll probably find a better pricing deal on a 486DX/4-100 chip, but keep an eye out for good deals on the 5x86 line.

More for Your Macintosh
PowerPC to the Mac

It’s almost as straightforward a process for Macintosh users, although in keeping with Mac tradition, it’s more expensive. You’re going from the 680x0 CPU to a PowerPC chip – which is what’s running the newest models. Make sure you’ve got at least 8 MB of memory, or refigure your price accordingly.

Several 68040-based Quadra models, starting with the 650, get their clock speed tripled with DayStar Digital’s 100 MHZ PowerPro 601 ($1,299). It moves you from the Quadra’s 32-bit data path to a swifter 64 bits and offers a secondary cache to speed memory access.

Installation is simple: lift the cover off the computer, locate the processor-direct slot, and insert the PowerPro card, which fits in the slot only in one direction. You can’t mess it up. Start up the machine again and install the PowerPro software, which you’ll then use to activate the new card.

You’ll get as much as three times the processing speed, but there’s a drawback: you’ll only realize it in software that’s written to take advantage of the PowerPC’s features. Make sure you budget that into the project.

You were first on the block to buy a Pentium, and you watched in dismay as the CPUs got faster and faster, pushing into the dizzying three-figured realm. With 166 MHZ processors hitting the mainstream, your 60 MHZ model seems all the pokier.

Intel has a fleet of new OverDrive chips that give you an easy upgrade. Your 60 MHZ system, for example, gets a 120 MHZ chip. It won’t fully double your system performance, but even the 40 to 50 percent boost you’ll get should help those graphics fly. All of the OverDrive CPUs run at 3.3 volts, but the 60 and 66 MHZ replacements have adapters for their 5-volt motherboards.

The chips aren’t cheap, but they’re guaranteed compatible with the older Intel Pentium CPUs. And if there’s any doubt, an extensive Web listing of testing motherboards is available at
Posted by B. A. Nilsson at 2:30 PM