Payback Time Dept.: Harry Smith’s “Anthology of American Folk Music” was a huge success when originally issued on six LPs in 1952 and when reissued on CDs in 1997. It influenced generations of singers and songwriters, and a tribute anthology (of performances recorded in 1999 and 2001) appeared in 2006. Here’s my review.

HAVING COME BACK TO LIFE ten years ago, Harry Smith’s Anthology of American Folk Music is proving as persistent a force now as it was a half-century ago, when the Anthology was a six-record set collecting ancient recordings of folk songs – commercial recordings aimed at rural markets, and featuring such performers as Mississippi John Hurt, Dock Boggs, Blind Lemon Jefferson and Uncle Dave Macon. 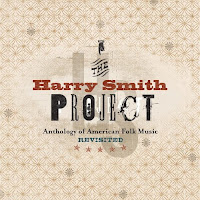 Bob Dylan was fascinated by this set; so were Dave Van Ronk, Roger McGuinn and many others who, after obsessive listening, would go on to shape the folk music boom of the 1960s.

The question for producer Hal Willner was how those songs might be interpreted by an array of contemporary singers. Elvis Costello, Nick Cave, Richard Thompson, Marianne Faithfull and Geoff Muldaur are among those tapped for the three concerts (London, New York and L.A.) from which the material for these two CDs and single DVD were drawn.

The answer proves the wisdom of Smith’s project – and the enduring legacy of songs that burrowed deeply into our unconscious. Take “The Butcher’s Boy,” sung in a 1928 recording by Buell Kazee on Smith’s Anthology, later covered by Joan Baez and the Clancy Brothers.

And, on this new set, Elvis Costello. He takes a straightforward but intense approach to this relentless lament, wrapping the timeless agony of this story in his familiar growl. It works, just as it works when Muldaur rocks out on “K.C. Moan,” which got a more subdued performance by the Memphis Jug Band in the original anthology.

But it’s not all that straightforward. Trombonist Roswell Rudd, who defies categorization, teams with Sonic Youth on “Dry Bones” – not the song where the bones are connected and gonna walk around, but an older, sterner number that Rudd and company turn into an inspiring cacophony – a wonderful swirl of sound punctuated with Rudd’s playing and singing.

“Uncle Bunt” Stephens, a champion fiddler, recorded “Sail Away Lady” in 1926; here it gets an enhanced instrumental ensemble featuring Van Dyke Parks at the piano and the Mondrian String Quartet, recorded at London’s Meltdown Festival. Two years later, Parks appeared at a Harry Smith tribute event at UCLA, this time with the Greene String Quartet and bassist Percy Heath – who are among the backing for Pere Ubu’s David Thomas singing “Fishing Blues,” this amazing confluence of musicians turning Henry Thomas’s plaintive number into a lively, angry anthem.

You’ll see that one on the DVD, along with well-chosen highlights from what’s on the CDs. And there area few bonuses, not least of which is a cameo by the Folksmen (Christopher Guest, Michael McKean and Harry Shearer) singing “Old Joe’s Place” from “A Mighty Wind.”

There’s also a bonus documentary DVD with an engaging feature about the life and work of Harry Smith, as well as examples of Smith’s filmmaking (he hand-colored animations, frame by frame) set to original music by Philip Glass and others (and Glass is on hand to introduce his material).

Other Harry Smith tributes included a 1997 tribute concert issued on a single CD and a two-disc set of what would have been Smith’s Anthology, volume four, and they’re important additions to any Smith-o-Phile’s collection. But this set may be most important in the way that it integrates those classic songs into contemporary performances, keeping the flame amidst ever mightier winds.

Cool. The Anthology is hugely influential on me.