From the Bookshelf Dept.: While Harvey Sachs continues work on his new Toscanini biography, let’s take another look at his wonderful book about a musical work that always warrants another listen.

HARVEY SACHS HAS A GOOD EYE for musical history. He visited conductor Arturo Toscanini in three books and pianist Arthus Rubinstein in one, informing the out-and-out biographies with a lively and appropriate historical context – especially useful when your subject was active for several decades, as were both of the aforementioned. 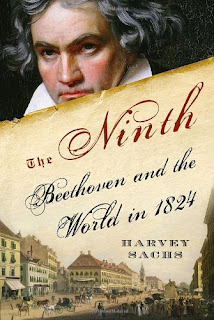 The Ninth takes a different approach by concentrating on one year: 1824. As he explains in an afterword, it won over competitors 1913 (The Rite of Spring, Pierrot Lunaire and other works) 1876 (Brahms’s Symphony No. 1) and 1830 (Berlioz’s Symphonie Fantastique, among others) because of Sachs’s “desire to talk about Beethoven and his world.”

It’s a splendid and necessary discourse. Beethoven’s Ninth Symphony has become such a repertory bulwark and is seen as such an undisputable masterwork that it’s almost context-free, save for a few stories about the deaf composer being turned by a soprano so that he could see the enthusiastic applause at the work’s premiere.

The Beethoven who emerges in this study is a man of genius and temper, who knew his own talent and struggled to make sure Vienna knew it, too. Beethoven the Impudent we’ve met before, but here we understand why his impudence was suffered by the royalty he served and insulted: they knew how important he was and forgave him his rash eccentricities.

Which is all the more remarkable when put in the political context Sachs offers. Vienna in 1824 was anything but benevolent toward freethinkers. Austria was the seat of a German Confederation put together in the wake of the Napoleonic wars by Prince Klemens von Metternich.

During the 1914 Congress of Vienna, an all-Beethoven concert was a centerpiece, despite the loathing by Metternich and other nobility of the composer and his work. And Beethoven himself, who a decade later would set a politically incorrect poem about brotherhood and freedom, composed for it an ass-kissing cantata, now mercifully forgotten, titled “The Glorious Moment.”

But Beethoven was crazy/savvy enough to exploit the patronage game for his own artistic ends.

Intellectual explorations by Stendhal and Hegel, both inspired by France’s post-Revolution upheavals, predicted a rebirth of introspective, artistic sensibilities – provided, in Hegel’s case, that it didn’t originate in France – even as nationalist tyranny spread through Europe and prompted the famous cease-and-desist from U.S. President Monroe.

As Beethoven became the musical embodiment of the Romanticism sought by Stendhal and Hegel, so, in the literary realm, was Lord Byron – dead for nearly three weeks when Beethoven’s Ninth premiered, but already famous for his libertarian beliefs.

A parallel figure in Russia was Pushkin, whose liberal-minded poetry won him acclaim but angered the tsar, who banished the poet to the country’s southern provinces for six years.

Tying together these artists and others who flourished around 1824, writes Sachs, is a “quest for freedom: political freedom, from the repressive conditions that then dominated Europe, and ... above all freedom of the mind and spirit.” Although the artists in question weren’t necessarily familiar with the work of one another at the time, “from a twenty-first century perspective, the connection seems almost too obvious.”

The power of Beethoven’s Ninth “has been used as a battle flag by liberals and conservatives, by democrats and autocrats, by Nazis, Communists, and anarchists,” writes Sachs, and he apologizes in advance for the cheek of the third part of his book, titled “Imagining the Ninth.”

It’s an analysis and appreciation of the piece, breaking the movements into logical components to better understand their fit, and looking at the fourth movement’s text and music, illustrating the liberties Beethoven took in setting Schiller’s verse. I’d like to think I know the symphony well, and have frightened my friends by threatening to whistle it in its entirety when they get on my nerves. But I found much to appreciate in (and much to learn from) Sachs’s essay.

Beethoven was a single-minded composer for whom music was his world, and thus for whom self-promotion was the necessary means of getting his work before the public. But the music remained supreme, and his decision to write a longer-than-usual symphony and finish it with a from-out-of-nowhere choral movement was not an audience pleasing gesture.

Like so many of his other works, it pushed boundaries and, in doing so, opened doors.  The final part of the book looks at the influence of the Ninth on significant composers who were alive when it premiered, from Berlioz to Wagner. More musical tendrils than I expected were spread throughout, a reassuring reminder that Beethoven’s Olympian reputation contains no hype.

This is a masterful study, accessible to layman and expert alike, an entertaining journey through history and well-formed opinion. Make sure you have a good recording of the piece at hand. You’ll want to hear it again.