Byron Gets Cranky Dept.: Not to pick overmuch on the Lake George Opera (now Opera Saratoga), which has presented many excellent productions that have been a pleasure to praise in print. But farce requires discipline, and said discipline crumbles when the production team trowels ersatz comedy on top of what’s properly built into the piece.

FARCE AND OPERA have become uneasy bedfellows. It’s bad enough in many a musical comedy, where cheap, audience-pandering gags are easy to indulge. In opera, farce offers a license to chase laughs at the expense of the integrity that, yes, even broadly written comedy deserves. Which is why I avoid any Gilbert and Sullivan production: I’ve yet to see one that reveals any understanding of the humor intrinsic to the piece. 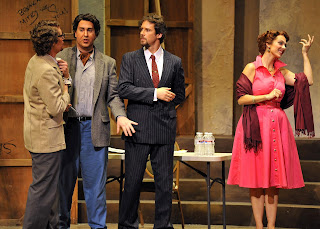 But Donizetti’s Le Convenienze ed Iconvenienze Teatrali, nicknamed “Viva La Mamma” for modern audiences, is unknown enough to be inviting. And it’s a backstage farce, which holds promise: anything that mocks sopranos has instant appeal.

It started off well, if deceptively. A new intro, devised by director Nelson Sheeley and the musically versatile John Douglas, kicks off with Mozart’s “Voi che sapete,” part of an audition sequence, and gave mezzo Elizabeth Pojanowski a brief, deft, amusingly sexy cameo. Soprano Allison Pohl sang more Mozart in another fine moment, and then Anna Steenerson, whom we would see later as Luigia, Secondo Donna, warmed us up with a bit from Donizetti’s “Lucia.”

All of which set the stage for the backstage antics of a company (played in modern dress) whose rehearsal of something titled Romulus and Ersilia is falling to pieces as backbiting and jealousy rules the day.

As the Prima Donna, soprano Elizabeth Andrews Roberts had a delightfully acidic presence and a powerful voice. She’s used to getting her way, and her husband (the obsequious Procolo, sung by Kenneth Mattice) is there to smooth things over. But Luigia’s mother then barges in to be sure her daughter has a duet with the star soprano.

This is the Mamma – Mamma Agata – of the nickname, a drag role that set baritone Richard Holmes scampering around in Dame Edna getup. With him came all the hoary old destroy-the-fourth-wall nonsense I was dreading.

Without a firm directorial hand (and a choreographer, much needed here), opera singers – especially the character types – will pull from a bag of tricks accumulated over many years and many productions. Thus it was that each of the leads here seemed, in terms of style and movement, in a separate show.

Not that this “Mamma” was without its moments. An octet sung just before Agata’s entrance had the musical verve that makes this kind of piece worthwhile, and even occasional rhythmic lapses didn’t mar the overall effect.

Tenor John Tsotsoros was completely believable as a hot-headed German tenor. Also sticking to their roles nicely were William Roberts as the composer, Jeffrey Beruan as the librettist and Christopher Temporelli as the beleaguered impresario.

Once Holmes hit the stage, however, we devolved to tit-grabbing jokes, and it was all played to the gallery from there on in.

The orchestra, under the baton of artistic director Curtis Tucker, did a commendable job with the sprightly score.