Across the U.S.A. Dept.: Return with me to the fire-ravaged Yellowstone National Park that my wife and I visited during our September 1989 cross-country journey. This piece (written Sept. 12 of that year) is one of 21 such that I wrote for the Schenectady Gazette about that trip, most of which are now nestled within the folds of this blog.

WELCOME TO A CHANGING YELLOWSTONE is the headline on a full-color supplement to a tabloid that’s handed to visitors as they pay their entrance fee. Above the headline are photos from last year’s devastating fires, including hopeful tidbits like the news that “some lodgepole pine cones require fire to release seeds.” 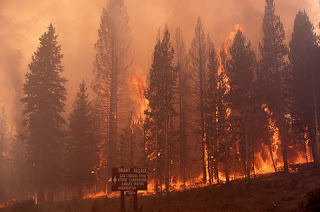 Three dry months last summer brought the moisture content of the trees down to a low ten percent; a series of lightning fires that had been allowed to burn in May turned dangerous a month later. Added to that were lightning fires that spread from adjacent land and fires caused by humans.

Almost half of the Yellowstone acreage was affected in some way by the conflagration, less than 20 percent of which actually reached the ground. But the testimony to fire’s talent for destruction is there in the hillsides of blackened trees that appear every so often as you wind through the park.

The “let burn” policy that allowed some of this damage has come under fire from tourists and supervisory people. What was intended as a reinforcement of a natural, ecologically necessary process seemed to have gotten out of hand, and nobody had a better time criticizing the policy and park superintendent Robert Barbee than citizens of nearby Cody.

After banishing Barbee to a specially-created park on Utah’s Bonneville Salt Flats, the satiric Cody Boobyprise (a bastard brother of the Cody Enterprise) suggested that the town’s Chamber of Commerce was in favor of the policy:


Sales tax figures for August and September (1988) show clearly that the firefighters dropped bigger wads than the Taiwanese yuppies and motorcycle tourons could begin to muster . . . (they) were “model tourists” (who) came to town for longer than one day, spent more than $5, ate at all the good restaurants . . . went to the museum, and bought bales of tacky t-shirts.

Driving the stretch to Yellowstone from any direction requires a commitment: you’re going to be in the mountains for a long time. At the height of tourist season (when foliage isn’t aflame) lines of cars wind an impressive distance back from the entrance booths. After Labor Day the RV armada takes over. There are fewer vehicles but they drive more slowly.

Some of the tourists staying over in Cody are worried about their upcoming Yellowstone visits. Old Faithful is fine and the geyser basin survived the conflagration, but otherwise will there be only acres of blackened hillside?

Despite the tide of high anti-park (or anti-park-ranger) feeling, the locals quickly assure them that the beauties of the area are undiminished. And the drive-through confirms that.

There’s a lot of work being done. Along with the reforestation is many miles of road reconstruction. The Craig Pass, the shortest way to get from the services at West Thumb up to Old Faithful, is a bulldozed mess that offers good practice for anyone who enjoys driving on a corrugated tin roof (the road was since closed for the season).

A number of buildings are getting attention, too, as three million dollars’ worth of structural damage is repaired.

Statistics shoot forth with an Old Faithful-like relentlessness, and park officials are concerned that the public is over-apprehensive as a result. Close to a million acres were burned in a 2.2 million acre park. The devastation beyond the park limits produced significantly higher figures.

During the fire, day to day news reports told of total acreage burning without observing that most of the damage was in the form of canopy fires, leaping among treetops without ever touching down.

The “let burn” policy is in fact an elaborate plan intended to acknowledge that fire is a natural part of ecological development. Given typical weather conditions, small lightning fires are allowed to burn themselves out—provided they follow a style of combustion forecast by fire officials.

Last year’s fires were a tragedy in which too much went wrong, both from human and natural causes. Yet some testimony to Nature’s relentlessness is provided by this slightly singed area. The Yellowstone Fires 1988 tabloid supplement provides a map of the damaged areas and officials are creating signs and exhibits to explain how fire damage is accommodated.

You round a corner (and there are many on these roads) and there it is: a patch of blackened woods, looking vulnerable and embarrassed, caught without its clothing. It is powerful in its muteness.

From the warmth of the brilliant sunshine on Yellowstone Lake we drove to the geyser basin, where the breeze was so cool that piles of steam poured from the waterspouts and Old Faithful itself chugged like an antique radiator.

Heading into the col that leads to the Grand Tetons we found a snowstorm waiting. As we dropped back down toward Idaho, the sunshine returned. Fire may be the most spectacular color on Nature’s palette but it’s by no means the only one.