From the Vault Dept.: Once upon a time, there was the brown paper bag. It held groceries, it sucked the fat out of cooling bacon, it served as schoolbook cover and wrapping paper. I’m guessing the piece below, written at a time when baggers were asking your paper-or-plastic preference, was part of a Schenectady Gazette special section, for which I was always able to crank out filler.

WHEN WAS THE last time your cat burrowed into a plastic bag? They don’t. It has no appeal. 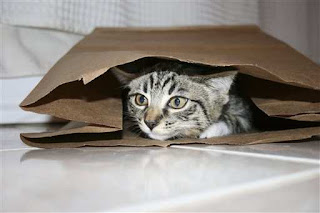 My fussy old calico even abandoned her ritual of leg rubs the first time I came back from the store with my groceries packed in plastic. Those leg-rubs, as you know, are feline for, “How about popping open a tin of Nine Lives right now and putting the rest of the stuff away later?” But a few disdainful sniffs of the plastic were enough to send her stalking out of the room, tail a supercilious exclamation point.

Is the brown bag on its way out? I hope not. Plastic will never achieve the same status. Brown bag" describes both a package and a style of packaging. Nobody “plastic bags” a lunch.

And speaking of packaging: There was a time when placing groceries into a bag was a craft practiced by virtuosos. They wore spanking clean aprons and stood proudly at the foot of the checkout conveyor, where they cast an expert eye over your produce.

A skilled practitioner could nestle two large cans of crushed tomatoes, a stalk of celery, a dozen eggs and a loaf of soft bread in one single-weight bag and injure nothing If the packer felt like showing off, you might find an unmarred bunch of grapes in there as well.

Now that we’re in an era that requires you to identify each type of lettuce to the cashier, bagging has joined the lost-wax process of molding bronze as an art form given to an era and then, in the misbegotten name of progress, taken away.

Examine the paper bag – which some dialects more properly term a sack – and you have a little marvel of simplicity. Brown, of course, because it is unbleached, and trimmed with a ragged edge. The crease on its sides terminates at an inverted vee to facilitate folding the bottom, and you get another of the bag’s simple advantages: easy storage. Although the plastic totes at the supermarket begin as a neat, flat parcel, I defy anyone to fold one of those things into something other than a crinkled mess.

Your brown bags, on the other hand, fold flat and store nicely in the space between refrigerator and wall (or whatever). Like the hanging of a toilet roll, brown bag folding and storage has its various and outspoken camps: there are single baggers and double baggers, one-turn folders and those who fold it thrice, even wrenching that little lip at the top into a turn.

My mother is a single-turner. As a rebellious teen, I became an all-the-way folder. It was an attitude born of snobbishness and a brown bag taught me an important lesson in high school that knocked me off that cloud with a bump.

Three classes of students attended my school: Hot Lunch, Tin Box, and Brown Bag. The baggers were the lowest rung, kids whose parsimonious parents dropped a sandwich – squishy white bread, of course – into a little sack along with an apple and a Ring Ding. The menu wasn’t too different for the tin box but the box provided a roomier enclosure for extra portions and allowed the carrier to make a statement with significant outer design. A Star Trek box was taken more seriously than one with a portrait of the Munsters on it.

The adolescent aristocracy took potluck at the daily hot lunch line and that’s where I and my nose-in-the-air friends were found. Classes – social ones, that is – rarely mingled at a table. We sat with our lunch-bearing items lined up in front of us; at my table, a neat row of trays.

It only makes sense, then, that I, an unthinking supporter of this segregation, should have been felled by simple desire. In this case, it was the radiant face of a student named Beth.

She and I were assigned a joint health class project on, of all subjects, nutrition. So it seemed only natural that I should lunch with her that day. I was so caught up in my admiration of her – I had never seen a face so pure or heard so silvery a giggle – that I didn’t see her withdraw the little sack from her locker. I noticed it only as we entered the cafeteria together and I made the turn toward the hot lunch line.

“I’ll save a seat,” she said, and headed for the brown bag section.

As I bore my food tray Beth-ward, it seemed as if everyone around her turned to stare at me, which seared my face into crimson embarrassment. Sitting with a tableful of girls was daunting but do-able. That they all brought brown paper bags was humiliating. Brown paper was proletarian, I knew, but how could wonderful Beth be anything but goddesslike?

The answer came as she spread her lunch on the table. Hers was not bologna-and-mayo stuff, but rather a small cornucopia of whole-grain breads, deliciously seasoned pastes of exotic beans, a salad of cracked wheat and lemon juice and the freshest fruits I’d ever seen.

I was having Sloppy Joes.

“You eat meat?” she asked in a tone that would have suited asking if you beat your grandmother. That stopped the romance dead in its tracks (a phrase she no doubt would condemn). But I did learn some facts about nutrition I’d never suspected, and gained new respect for the biodegradable brown bag Beth bore proudly.

“There’s something so, I don’t know, earthy about it,” she told me “Have you ever noticed how rich and complicated a brown bag smells?”

I thought about that the other day when came back from the supermarket with my groceries nicely packed (I’m pretty good at it) in a paper sack. I emptied the goods and was preparing to make those precise, snappy folds before shoving the bag next to the fridge when I gave a sniff and immediately was reminded of a leaf-pile.

My cat was watching. I dropped the bag onto the floor. She, too, gave it a nose inspection. Then she slithered inside and hunkered down, eyes sparkling in the gloom.