No, Really: Try Him

From the Back Catalogue Dept.: In 2007, David Bromberg broke a 17-year recordings silence (at least as star attraction) with a CD featuring just him and his guitar. In advance of his appearance in Albany tomorrow (Friday) night, here’s another look at my Metroland review of the disc.

BACK IN THE DAYS before selective serotonin reuptake inhibitors, depression was known as the blues and a popular course of treatment was to write and perform a song about it, preferably opening with a plangent picture of the singer waking up one morning in an empty bed. 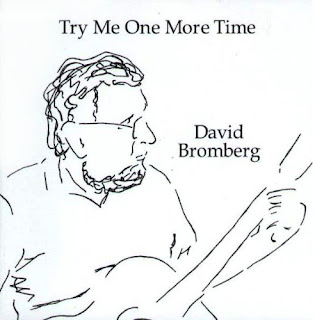 Robert Johnson’s “Kind-Hearted Woman” is just such a plaint, but it’s distinguished by a more sophisticated ambiguity than many such songs: “I got a kindhearted woman, do anything in the world for me/But these evilhearted women, boy, they will not let me be.” As played and sung by David Bromberg on his new CD, it features the same deft melding of voice and guitar as in the best of the many other versions (Muddy Waters, Eric Clapton, Johnny Winter, among others).

Bromberg’s playing – he accompanies himself throughout on a Martin M-42 made especially for him – isn’t flashy, but it’s thorough. His virtuosity lies in crafting a line that sounds right, deftly supporting his voice and creating an infectious groove. No wonder he was the sideman of choice for so many years, working with just about everyone you’ve ever heard of.

“Kind-Hearted Woman” has the additional enhancement of Bromberg’s own verse: “I was out in California, there was a great big rumbling on the ground/I was out in California, people, whoa, the earth was tremblin’ all around/Those people thought it was a big earthquake comin’ to get ’em: Lord, wasn’t nothing but those evil-hearted women trying to run me down.”

It’s a great image, one that Bromberg has spun throughout his long and unique career. In many of his original songs he’s alternately pursuing the uncatchable (as in “Sharon” and “Testify”), or fighting them off (“I’ll Take You Back,” “Try Me One More Time”), although this persona relaxes into the background on this CD, his first studio recording in 17 years.

“Try Me One More Time” therefore makes a great title for this disc, and, although it’s his only original on the album, it blends perfectly with the classics that follow. It’s a song of anger and regret, but with Bromberg’s shimmering slide-guitar accents, he makes this lament sound almost peaceful.

“It’s the first record I’ve made where I wasn’t trying to impress anybody,” Bromberg writes in the liner notes, and that may be a source of said peacefulness. The booming bass line of Tommy Johnson’s “Big Road” is as propulsive as ever, but it’s confident, heartfelt, witty.

Two songs salute a Bromberg mentor, Rev. Gary Davis: “I Belong to the Band” and “Trying to Get Home,” and in both it’s easy to forget that the band consists of but one guitar. Bob Dylan played harmonica on Bromberg’s eponymous debut album in 1971 (the cover art of the new release harkens back to that); Dylan is saluted here with Bromberg’s performance of “It Takes a Lot to Laugh, It Takes a Train to Cry.”

Two instrumentals – “Buck Dancer’s Choice” and “Hey Bub” (a Big Bill Broonzy number) display Bromberg’s picking talent, and two a cappella numbers make the most of his voice. “Moonshiner” has an Irish lilt, while “Lonesome Roving Wolves,” a Mormon song of travel travail, is a nod to Rosalie Sorrels and finished this brief (48-minute) dense album on a charmingly wistful note.

Although I always enjoy hearing the horns and drums of the Bromberg Band (which returns to Albany in November), this is a wonderfully intimate look at one of our most talented, uncategorizable musicians.