Of Restaurants and Restaurateurs

From the Bookshelf Dept.: I combat holiday cooking demands by inflicting unfamiliar (to me) recipes on those foolish enough to dine at my house, and thus welcome the new cookbooks that appear towards the end of the year. Here’s a look at three such volumes.

THE SOUND AND FURY of the Food Network can’t guarantee a good cookbook. What appeals to the goggle-eyed masses is spectacle; what works between the pages, for me at least, is something intelligently considered and skillfully written. Which is why I’m always keen to see what Phaidon Press offers in the food realm. 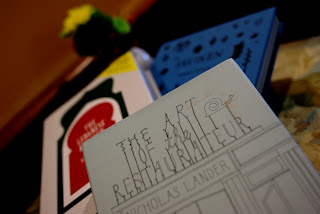 Three recent books uphold the publisher’s good taste. Fäviken, by Magnus Nilsson (no relation) surveys the cooking and philosophy behind the world’s most remote eatery. Salma Hague’s The Lebanese Kitchen is a brilliant survey of one of my favorite cuisines. And The Art of the Restaurateur, written by Nicholas Lander, gives mini-biographies of and valuable lessons learned by 20 of the world’s top restaurateurs.

Lander writes about restaurants for the London Financial Times and is himself a former restaurateur, having helmed Soho’s L’Escargot to success in the 1980s. “While chefs may use plates for their art,” he writes, “restaurateurs’ imaginations work on much bigger canvases.”

Those profiled include restaurateurs who have become media stars, like Danny Meyer, known for Union Square Café, Gramercy Tavern and many more, including Shake Shack, which has a seasonal outpost at the Saratoga track. Despite the size of his empire, Meyer has in common with the other subjects a hands-on, very personalized approach. When he failed to recognize a waiter during one of Lander’s visits, he correctly assumed the man was a new hire and would be attending a training session later that day – a session Meyer oversees.

Less well known may be Drew Nieporent, who opened Nobu in London and New York and 33 other places over nearly 30 years. “We restaurateurs are a dying breed,” he tells Lander. “We’re the dinosaurs of the industry, being wiped out by the chefs.” His story brings forth another common characteristic: working the door, learning the customers and accommodating their preferences. As well as the ability, as Lander notes, “to recognize talent and not let it slip through your fingers.”

According to Joe Bastianich, who has opened a dozen NYC restaurants with Mario Batali, including Babbo and Eataly, personal attention is the key. Chefs, he says, “see things in black and white while restaurateurs see the world in various shades of grey.”

We meet other striking personalities in the U.S., England, Ireland, Italy, France, Spain, and beyond, and what could seem like a one-note encomium is in fact filled with fascinating detail that will particularly interest those in the business – although I suspect there’s considerable charm for civilians as well. And the book is set off by delightful line drawings by Nigel Peake.

For its varieties of hummus alone, Lebanese cookery is endlessly appealing. When you try the hummus recipes in Salma Hague’s The Lebanese Kitchen, you’ll appreciate the high crap level of what infests the supermarket shelves. Where you certainly won’t find hummus with pumpkin and cilantro.

In the tradition of cookbooks like The Silver Spoon and I Know How to Cook – and, for that matter, The Joy of Cooking – this is a densely packed, 500-pages collection of recipes, nicely but not exhaustively illustrated, with enough detail in each recipe to put the home cook at ease.

It’s assumed that you’re familiar with seasonings like sumac and za’atar. It’ll help if you enjoy lamb. But you’ll also encounter the Lebanese version of moussaka, which is meatless, and a traditional fassoulia stew, made with white beans and tomatoes.

The book is both a handy reference to re-consult and, as you browse through it, an idea-sparker. I’d like to make this right now, I find myself thinking, but I don’t have this ingredient. What can I substitute? Thus is your own repertory born.

Such was the style of a Swedish teenager who dreamed of helming the word’s finest restaurant. He trained at a Michelin three-star kitchen in Paris, returned home and abandoned his dream in favor of becoming a sommelier. This, too, he abandoned, moments before achieving certification. The dream restaurant still beckoned. He opened a tiny eatery in the woods of Fäviken, which sits ninety minutes from the nearest airport, served by a single taxi.

Magnus Nilsson, who has yet to reach 30, is well on the way to achieving that dream. His 14-seat restaurant, named (as is the book) Fäviken, has become a next-big-thing foodie focus, mentioned in the same breath as the shuttered elBulli and Copenhagen’s Noma.

In his cookbook’s early pages, Nilsson warns that the only precision required of measurements and cooking times will come from your own experimentation. But you won’t be preparing much of what’s detailed here.

For example, “Marrow and heart with grated turnip and turnip leaves that have never seen the light of day, grilled bread and lovage salt” requires you to grill a cow’s femur, deducing when the marrow is heated sufficiently and sawing the bone at tableside to release the marrow, into which is mixed sliced raw cow’s heart. Which then is folded with turnip slices and turnip leaves.

Most of the text is about philosophy and procedure. “Giving a carrot the attention it deserves” instructs you how to pick it, wash it and peel it, noting that if you’re doing it correctly, the peelings “should land beyond the carrot in a very neat and straight little stack, almost on top of one another.”

The real lesson of this fascinating book, and its most valuable one, is the reward of cultivating an awareness of what grows around you. You may consider yourself the most ardent locavore in three counties. You have nothing on Nilsson, and the simple wisdom his book imparts will mean you’ll never look at your backyard in the same way again.