Critics on Parade Dept.: As noted yesterday, a festival of new theatrical works begins this evening thanks to the Capital Rep-Proctors Next Act festival. I’ll be part of the Critics Circle discussing our craft at 1 PM Sunday, Nov 4 at Cap Rep, and have been posting a few of my reviews in anticipation of the event. Here’s a pair of them. The first takes a far more measured approach than the one I shared yesterday, while the second shows that my crankiness has mellowed with age.

ALTHOUGH NOËL COWARD’S operetta “Bitter Sweet” followed the more modern-sounding “Showboat” by two years, 1929 was still an era of melodramatic passion played out against frothy tunes, with Rudolph Friml and Sigmund Romberg, among others, still cranking them out. 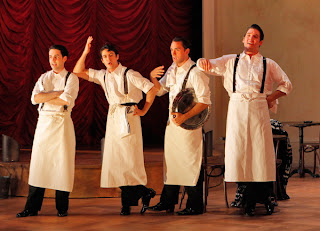 But Coward’s piece occupies a special place. It’s a tribute to the era in which the young playwright-composer developed his theatrical sensibility, and the trademark Coward wit shines through the creaky layers of melodrama.

The playwright already had made big successes with “The Vortex” and “Hay Fever,” and had contributed songs to revues, but this was his first musical book show. Fittingly – given the Victorian-era feel of the piece – it is set but briefly in 1929 before flashing back to 1875.

Here’s where the Bard production made the first of several departures. London-based director Michael Gieleta moved up the setting to open in 1969 before heading to 1920, a decision that can’t really have saved much on costumes and muddied the social mores informing the piece.

The climactic end-of-Act Two moment is sparked by a military captain’s desire for Sari, who unwillingly works in a club as professional dancing partner while her husband, Carl, leads the band. In the original, Captain Lutte, whom we assume is an officer in the Austro-Hungarian army, aggressively lip-kisses the women, which is enough to spark a duel. The new post-war setting inspired Gieleta to let Lutte get far more carnal, picking the poor actress up by her ass before practically rolling on top of her.

This is Coward, not “Cabaret.” The unneeded time change also orphaned Cowards’s clever parody of the 1890s hit “Tarara Boom-De-Ay,” which only makes sense when the scene remains in 1895, and 1969 presents a less acute social-class gulf than what was manifest forty years earlier.

Joshua Jeremiah, as Captain Lutte, put appropriate gusto in “Tokay,” the big drinking song celebrating a Hungarian wine, while Miller’s Act Three version of “Zigeuner” celebrated a memory of Hungarian gypsy music – both appropriate to the politics of the show’s original timeframe, again underscoring the need for a production team to understand the history behind a piece before messing with it.

There’s little chance we’ll see this piece elsewhere, however, and Bard’s Summerscape program is once again to be lauded for at least putting a very good semblance of it onstage. It’s a big show that would benefit from a big cast and orchestra, but, as with so many modern revivals, exigencies of budget and space prevail.

Adrian W. Jones’s set is high-walled and spare with oversized French windows that give way, in the second act, to a cabaret stage. Dancing – especially waltzing – is key to the look of this piece, and this left a good amount of space for Christopher Caines’s fine choreography.

The big hit of the show, in which tunefulness triumphs over a semi-sappy lyric, is “I’ll See You Again,” a duet by Sari (Sarah Miller) and her singing teacher, Carl (William Ferguson). Their voices were perfect for this material: operatically trained but sensitive to the nuances of the text. They were a bit mismatched as the couple, however, as they didn’t characterize the class difference between them. But it was easy to revel in their subsequent duets of “Evermore and a Day” and the once-popular “Little Café.”

As the older version of Sari, Siân Phillips brought terrific dignity to the part, oozing with upper-class confidence. She can snap off a Coward line with the best of them (“Your future husband is in there, practically weeping into the cold asparagus”). She has a surprisingly low-pitched voice that she used to good effect in a specially-inserted reprise of “Zigeuner.”

The showstopping number was “If Love Were All,” brilliantly sung by Amanda Squittierri as Manon, a character who describes herself as a diseuse but certainly knows her way around a song, headlining as she does in the Viennese café. And just as Coward could channel the waltz style of Richard Strauss in this piece, so do could he provide a pastiche of a naughty French music-hall song in “Bonne Nuit, Merci!,” also well sung by Squittieri.

The score abounds with charming ensemble pieces, such as the Act One Finale (“Eeny Meeny Miny Mo”) for a women’s quartet, the Act Two opening number for a quartet of waiters with a trio of women (“Life in the Morning Isn’t Too Bright”) and, most notably, the daring-for-its-time Oscar Wilde tribute “We All Wore a Green Carnation,” handsomely danced and sung by the male quartet.

And all were brilliantly accompanied by an eleven-piece ensemble playing new orchestrations by Jack Parton and splendidly conducted by James Bagwell.