From the Holiday Vault Dept.: I’ve been paying tribute to Thanksgiving for many years with Metroland articles; today’s issue features a piece I wrote about choosing wine, drawing on advice from folks more knowledgeable than I. Although it seems as if I’ve been turning in these pieces forever, the practice dates back merely to 1995, when the following was published.

ANY MINUTE NOW, a horde of hungry people is about to descend on your house. They’ll start banging forks and knives against the table in anticipation of Thanksgiving turkey, and the feeding frenzy will persist through Christmas and New Year’s. 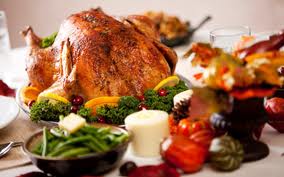 Ritualized dining, if you exclude what goes on in sports bars, is what sets us apart from other animals, and food-enriched holiday celebrations are the glue that hold the rest of the ritual fabric together. Which means that they’re vital elements of a civilized society.

Thanksgiving has roots in the Greek harvest festival, the Hebrew Feast of Tabernacles, and a Roman celebration called Cerealia, honoring the goddess of Wheaties. Ironically, our American Thanksgiving remembers a feast held in the autumn of 1621, when surviving English settlers in Plymouth, Mass., honored the Indians who helped them get through a harsh winter without calling attention to the stupidity of arriving on a new continent too late to harvest anything, never mind plant it, with no viable crops in hand and a characteristic hostility toward unfamiliar cuisine.

That hostility persists, although in a revised form, as I learned the year I decided to forego the traditional turkey dinner in favor of a vegetarian Chinese menu. We’re bringing the turkey back this year, but please don’t expect the rest of the menu to be any too conventional.

What will your holiday entertaining include? Line of least resistance, of course, is dinner out, and there are plenty of restaurants to help you. (But it’s not the busiest day of the restaurant year--Mother’s Day still has that guilt-ridden distinction.) While I’m not opposed to the idea of letting someone else do the cooking for you, and I know some places that do it extremely well, the point of the holiday is to join with family and guests in the meal’s preparation and presentation.

Popular convention ranks cooking somewhere below ironing as a desirable household pursuit, and we’ve been deluged with so many pre-fab entrées and 60-second “gourmet” recipe columns that it’s easy to think that you need a MENSA membership and OSHA clearance to wield a skillet or two.

Yet the bookstores and magazines also abound with holiday guides, complete with mouthwatering photos and reams of recipes. How best to deal with entertaining at home? It’s all in the planning. A professional kitchen is broken into stations, and each station typically is separately staffed. If you can assign your helpers to various stations, all the better – and keep in mind that many professional kitchens are no larger than yours.

Cold storage is vital. Clean that fridge. Arrange a prep area near it with enough room for a cutting board, at least. If you’re cooking with a helper – and that’s part of what makes the ritual fun – locate another prep area far enough away from the first that you don’t smack into each other. You want to carve vegetables, not each other.

If you don’t have the luxury of a pot sink, you’ll want to clean accumulating cookware frequently. I’ll confess that when it gets really chaotic at my house, those pots pile up on the back porch. Keep them clean or get them out of the way.

Your cooking station consists of ovens and stovetop, and you’ll want a prep area as close to the stove as possible. Intense sautée works may require you to disable a nearby smoke detector. Remember to re-battery it as soon as possible, and always keep a chemical-based fire extinguisher near the stove.

Turkey dominates an oven. If you’ve got only one oven, don’t put too many baked items on the menu. But remember that the bird can and should sit for a while after it comes out, which will give you 20 to 30 minutes to cook other things. You might be able to start some of them ahead of time, then give them a finishing shot post-turkey.

Some pre-cooking is futile, though. Turkey especially: you’ll just dry it out. And don’t stuff and refrigerate a turkey ahead of time. Stuffing is a favorite bacteria hideaway. Speaking of turkey, if it’s frozen, thaw it in the refrigerator, not on the kitchen counter. It takes nearly a week, but you’ll get a better flavor.

Keep your utensils clean and sharp. Dull knives are dangerous, and dull peelers are useless.

We make the kitchen the focus of this holiday. Guests gather on the periphery as the cooking goes on, and we move en masse to the dining room as the meal is served. That means that several guests can be put to work, so think ahead of time of tasks you can assign.

Although we haven’t had the nerve to do this yet, there’s another tip you can take from America’s natives. Among the Plains Indians it was a custom for guests to bring their own plates and utensils to the meal and take them home afterward for cleaning. That well might become the instruction on your next invitation to my house.