ONE OF THE FUNNIEST set pieces in Jacques Tati’s brilliant movie Mon Oncle takes place on the approach to a county village, where a group of boys is gathered on a rise overlooking a street and sidewalk. On the sidewalk is an inconveniently placed lamppost, the treachery of which the kids have learned to encourage. When a likely pedestrian approaches the pillar, one of the boys whistles at just the right moment to cause the victim to glance aside and collide with the impediment. 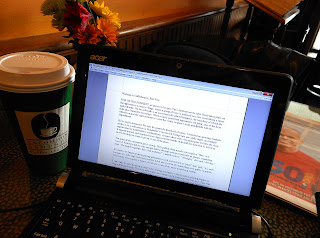 We’re easily distracted. We take for granted a threshold of safety. I watched an amusing example of this is in a coffeehouse in Manhattan’s Greenwich Village late one chilly night, an example unprovoked by hobbledehoy machinations. A heavy door with a big glass pane led into the shop. It opened inward, and engraved brass signs near the handle indicated the direction in which to move the thing in order to get in or out of the place.

Yet most of the customers got it wrong. They pulled when a push was required. They vice-versa’d. And they did so with enough follow-through energy to provoke an abrupt, stumbling stop. “Do people regularly have that problem?” I asked a server. “All night,” she said. “All day.”

If I tend to be fanatical about paying attention to such instructions as “push” and “pull,” it’s only because my mile-high selfconsciousness holds me in terror of committing such gaffes in public. To become even slightly a figure of ridicule is one of my most mortifying ordeals.

I can’t take it, but I’m quick to deal it out, teasing my family without mercy, playing pranks on long-suffering friends. The most memorable such prank had a mean-spirited core to it. This was in the mid 1970s, during my brief flirtation with college. I never got a degree, but I acquired, at long last, a girlfriend, and she had a high-strung roommate in whose name the shared telephone was registered.

And who insisted that when monthly the bill arrived it be paid instanter, if not before. She harassed my beloved for her share of the money with persistence of a souk-seller, with the result that at a certain time every month I also had to endure complaints about it. “She says her credit rating is going to be ruined,” my girlfriend explained. “She goes on and on and on about it.”

We are in the pre-cellphone, pre-computer days. A friend of mine named Steve was art director of a small magazine called The Philanthropy Monthly, and had access to typesetting equipment. One evening we created a letterhead for a fictional entity we named The Credit Bureau of New York State, with a Wall Street address in Manhattan.

The text we composed informed the roommate that, because of several late payments on her telephone bill, she had been assigned a credit rating of C. Our made-up correspondent suggested that she strive to pay her bills on time in order to boost this rating. We hoped she would telephone the Credit Bureau. We provided a Manhattan number for that purpose.

Sensitive to the fact that using the U.S. postal service for scurrilous things could open one to charges of a Federal nature, we postage-metered the envelope but used a clever trick that I won’t reveal in order to eliminate the meter number. The letter went on its way.

The result was gratifying. My girlfriend, who had no prior knowledge of this, was there when her roommate received and opened the letter and burst into tears. “See!?” she wailed. “See what happened?”

As her sobbing eased and sanity returned, she called the company then known as Bell Telephone and pleaded for her credit level to be raised. The representative with whom she spoke was baffled. He collected information from the letter and promised to look into it.

He called her back. “There’s no such business as ‘The Credit Bureau of New York State,’” he told her. “Furthermore, that phone number you gave me is for Dial-a-Joke.”

The distressed young woman hung up the phone, stared again at the letter, and murmured, venomously, “Byron.” And never spoke to me again.

As I say, I have a tough time on the receiving end of such things. During my senior year in high school, my family moved from Connecticut to Illinois, leaving me behind to graduate. I lodged with friends, taking a room on the third floor of a historic mansion in downtown Ridgefield.

If I have little confidence now in the strength of my appeal as any kind of companion, I had none of it then. I feared that at any moment I could be called out as one of humanity’s frauds.

So when I arrived back at my room one day to find it completely empty of furniture, empty of clothing, stripped to the bare walls, I suffered the almost restful sense that the long-feared day was upon me. I wallowed in self-pity even as reason crept in, telling me that even if I were being thrown out of the place, they wouldn’t have removed the bed.

Many practical jokes don’t allow the jokester to witness the payoff. There was a fellow in 18th-century England who famously asked a gentleman to hold one end of a cord for him to allow a measurement to be taken, then paid out the line around a nearby corner and gave the other end to another man with the same request. He left the scene knowing he’d never be able observe the moment his victims got wise.

Thus it was with the friends who flushed my room. I soon enough discovered that my stuff had been dragged to another room on the otherwise unoccupied upper floor, and they later insisted that they believed I’d figure it out quickly, have a good laugh, then call one of them, at which time they’d return to replace and redecorate.

I wallowed in surliness, hauling my goods and furniture back into place alone, angrily hoping that I might dislodge a lumbar vertebra and could blame my subsequent hospitalization upon these miscreants but, alas, no such injury ensued and I maintained a bitter silence only long enough to prove what a humorless jerk I could be.

These days, the rhythms of my life are undisturbed by such antics. No wonder I get fascinated by the spectacle of people bumping into a door.
Posted by B. A. Nilsson at 11:38 AM

Hmmmm. I have no memory whatsoever of the room-emptying episode you describe. So either my memory has a big hole or that took place without my awareness or involvement. I can't imagine being party to a prank like that myself.

You were not at all involved. As you said: not your style. And I suspect I was too mortified to have told you about it at the time.