Is Your House Radioactive?

From the Computer Vault Dept.: Remember when radon was all the rage, seeping out of our cellars and wreaking radioactive havoc upon us all? I tried to do something about it. This is from a 1995 issue of Computer Life magazine.

HER SMILE RADIATED HAPPINESS. The radiator hissed warmly. Funny how a few decades can transform comforting images into distressing ones: Radiation poisoning. Radioactive half-life. But times have a way of changing, and the safety films of the atomic '50s—the ones that told us we’d be fine if we looked away when the Bomb went off—taught us an even larger lesson later on: Don’t believe the so-called experts. 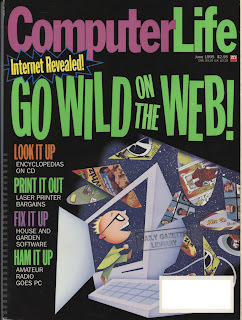 We’re going to turn a computer into a Geiger counter. All it takes is a gadget not much larger than a cassette tape box. The RM-60 Radiation Monitor from Aware Electronics plugs into your computer’s serial port and comes with software that can continuously display radiation levels or, when loaded as a terminate-and-stay-resident program, can capture information to be displayed later. The RM-60 will automatically sound an alarm when it detects levels that are too high, which can be useful if you live close to a nuclear reactor and don’t trust the emissions reports.

Teachers and hobbyists can set up experiments for observing radiation levels in rocks and gases and even (with added equipment) the sky at night. But the home user gets the best deal of all: peace of mind—like the comfort you get from a smoke or carbon monoxide detector.

Like a Geiger counter, the RM-60 detects ionizing radiation. That’s the stuff you find beyond the visible light spectrum, beyond even ultraviolet light, in the realm of alpha and beta particles and in gamma and X rays.

Measurements are based on a standard unit of radioactivity called a roentgen, which is an amount of ionization produced by gamma or X rays. To determine a dosage, you take measurements over time. The RM-60 and its accompanying software measure in microroentgens (one-millionth of one roentgen) and give readings in microroentgens per hour. Keep in mind when measuring that there will always be fluctuations in levels.

There’s a default alarm set to go off when the average exceeds 27 microroentgens per hour, although you can change that level in the setup menu. Needless to say, it’s unsettling when the thing goes off, which can happen even in a fairly harmless environment if you’re collecting readings at 10-second intervals. I took the RM-60 with me on a trip to the Adirondack Mountains and had the alarm shriek embarrassingly while I was taking readings in the resort’s lodge.

At home, I started by measuring emissions from my computer monitors. Older models are notorious for giving off radiation; after determining the background radiation level in my house (remember, there’s always some radiation), I placed the sensor in various locations around the monitors.

That began my radiation-measuring spree. I checked out some of the common sources of potential radiation. Clock radios: fine. None of the dials on the wristwatches in the house emitted any detectable radiation. Our china was not irradiated, and neither was anything in our gold jewelry. My Discwasher Zerostat gun, used to zap static electricity from phonograph records, showed no presence of polonium. However, both smoke detectors provoked increased readings; there is typically a small amount of americium 241 in the sensing chamber, which is why you shouldn’t take those things apart.

In the basement, where radon may collect, I let the machine take readings overnight. A slight increase was evident, but it was nothing to worry about. I even took the filter out of an air cleaner attached to the furnace and took readings; again, no surprises. Then I found an old lantern mantle in my camping supplies. Those mantles, the older ones at least, were made from silk soaked in thorium salts—and that’s dangerous stuff, as this project quickly taught me. Be careful handling them—especially when throwing out an old one that has turned to ash, which can easily be inhaled.

It sounds weird to think of measuring radiation as fun, but it’s a fascinating project that reveals valuable information about parts of the world around us that we can’t see.

DO:
Find a secure location for the monitoring device.
Take readings over an hour for good averages.
Learn about the differences among radioactive waves.

Everything You Need for This Project: 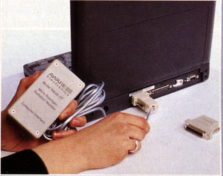 INSTALL THE SOFTWARE. Turn on your computer. At the C:\ prompt, make a directory by typing MD AWARE and pressing Enter. Switch to the new directory (type CD\AWARE and press Enter) and put the floppy with the monitoring software in the A: drive. Copy everything from the A: drive by typing COPY A:\ * * and pressing Enter. To copy the graphing program, which is in a subdirectory on the floppy disk, just type COPY A:\ GRAPH \*. and then press Enter. 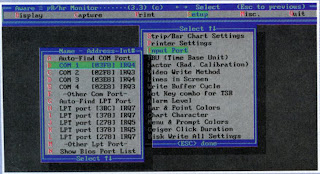 CONFIGURE THE SOFTWARE. Start the program by typing AW-SRAD at the C:\AWARE prompt. You’ll see a menu bar across the top of the screen. Type S for Setup, and choose I for Input Port. I didn’t have many input options with my portable because there’s only one serial port in the back, but I typed A for Auto-Find and was pleased to see the program correctly detect COM1. Press the right arrow, and the next item. Time Base Unit (TBU), pops up. Select it by pressing Enter, and make sure that the capture interval is set to 10 seconds. Press Esc to close the window. 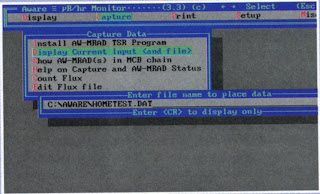 START THE CAPTURE FUNCTION. Press the left arrow twice to get over to the Capture menu. Choose D for Display Current Input. When prompted for a filename, type HOMETEST.DAT and press Enter. Press Enter again to open the capture window. 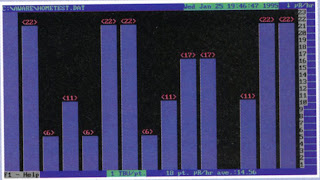 MEASURE BACKGROUND RADIATION. To measure the average level of radiation in the room, place the RM-60 on a tabletop and take a few minutes worth of readings. As radiation is detected, the computer will emit little Geiger counter-like clicks. Note: Numbers will fluctuate, especially while you’re taking those 10-second averages, so don’t be alarmed by the swings. Check the bar at the bottom of the screen for the actual average level; in my house, it’s about ML 14.5 microroentgens. 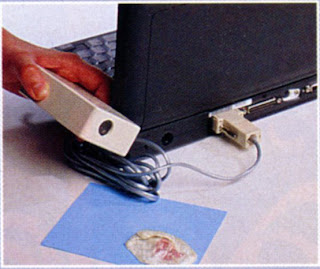 CATCH SOME RAYS. To see how the program measures real radiation. I measured the spare mantle from a camping lantern. The results were alarming. Even though this mantle had been lying in my backpack for three years. it was incredibly potent. I placed it about an inch away from the detection window of the RM-60 box and was startled by the crackling from the computer speaker—the levels rocketed up to more than 200 microroentgens. Press F2 twice to finish taking readings and save your data, and then press Esc to exit. Hint: Try placing a sheet of paper between the mantle and the RM-60; this blocks alpha particles, so you should see the levels subside. I also folded a sheet of heavy-duty aluminum foil into eight layers and put it between the mantle and the measurer: the level fell further still because the beta particles were blocked. 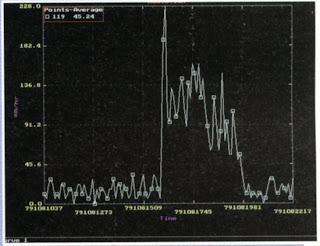 GRAPH YOUR READINGS. Start the graphing module by typing AW-GRAPH at the C:\AWARE prompt. Press Enter to choose the Load-Edit File menu, and then press Enter again to load a file. Highlight HOMETEST.DAT on the displayed file list and press Enter. The next window prompts you to confirm that it’s a radiation file: press Enter. Confirm the default calibration setting in the next window by pressing Enter. At the main menu, type M for Make Graph and accept the defaults—Straight Plot. Auto Scale—in the next two windows. You’ll see a ragged line that shoots up in the presence of the lantern mantle, evening out slightly when the paper and aluminum foil are applied.

B. A. Nilsson no longer lives in fear of radon in the basement of his rural home, but he still won’t sit too close to the TV set.

I had the product only long enough to test it, after which my editor commandeered the unit and software to keep tabs on his own house.