From the Bookshelf Dept.: Like so many disenfranchised writers-to-be, I stared at the opening page of Thomas Pynchon’s Gravity’s Rainbow (“A screaming comes across the sky . . . ”) and realized (A) this would be the biggest reading challenge I’d yet encountered and (B) it wasn’t as if I had anything else to do, except scrape up rent money and work on my novel. I’ve been hooked on Pynchon’s work ever since. I’ve already posted my review of his Mason & Dixon, which was the “massive saga ” rumored below. 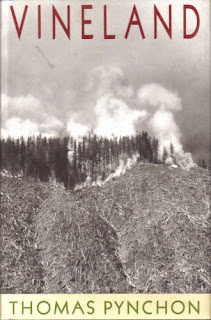 BEHIND THE DAZZLING WORDPLAY and labyrinthine plotting of Vineland, Thomas Pynchon's first novel in 17 years, there’s a compelling goofiness that lets you know you’re back in a world unique to this obsessive and all-knowing storyteller.

Although set in 1984 in a small county in Northern California, the book time- and place-shifts through a dazzling kaleidoscope of narratives. Prairie Wheeler hears the surprising story of a mother she barely knew, even as the woman – named Frenesi because of her parents’ fondness for big band tunes – is pursued by manic federal prosecutor Brock Vond.

Vond is bringing a drug-fighting strike force to town to conquer one of California’s most inaccessible pot farms, but DL Chastain, former sidekick of Frenesi, is out to head him off. Darryl Louise has been trained to the highest degree of Ninja combat:


“She learned how to give people heart attacks without even touching them, how to get them to fall from high places, how through the Clouds of Guilt technique to make them commit ‘seppuku’ and think it was their idea – plus a grab bag of strategies ... such as the Enraged Sparrow, the Hidden Foot, the Nosepicking of Death, and the truly unspeakable ‘Gojira no Chimpira.’”

And it’s DL who is telling Prairie the story of the turbulent ‘60s, when much of the flashbacks are set, as they hole up at the Sisterhood of Kunoichi Attentives, described as “a sort of Esalen Institute for lady asskickers” with DL’s partner, Takeshi Fumimota, who got involved through a bizarre mistaken-identity conflict.

Although Pynchon’s passion for privacy gives his character that seeming out-of-touchness we associate with a recluse, he gleefully shares his impressions of popular entertainment throughout the book, plotted like an old Paramount door-slammer and filled with old-musical-style lyrics that appropriately comment on the action. DL introduces herself with a song:

and the narrative spins from acknowledging for-real movies to casting some bizarre features of its own (Woody Allen in “Young Kissinger,” for example).

Television gets its due, with addict and DEA field agent Hector Zuniga bouncing in and out of the “tubaldetox” center even as he pursues Prairie’s dad, the hapless Zoyd Wheeler who collects a government insanity check provided he jumps through a plate glass window every year.

A chorus of critical disappointment greeted Vineland over the past few weeks, and the New York Times pulled a People-like stunt by commissioning an inscrutable review from author-in-involuntary-hiding Salman Rushdie.

Trouble is, people have formed certain attachments to Pynchon’s work over the years that are built as much on the special mystery of penetrating his work as on the works themselves. Gravity’s Rainbow and V. are fat, densely-packed novels that offer exacting joyrides over the same witty, paranoid landscape that Vineland provides.

Making it through one of the big early novels was for readers (and would-be writers) of recent decades what plowing through Thomas Wolfe was for readers in the ‘30s. Part of Pynchon’s luster is that he forces active participation, and, like great scary carnival rides and first dates, the recollection can be even more exciting than the event.

The other part of that luster lies in the storytelling itself. The prose is lean and deft. Characterizations are imparted through rhythms of speech and our imaginations even as a memorable panorama of uniquely-named people tumbles around like wash in a dryer. Layer after layer of comically-colored action is stripped from the saga in reverse chronology until the surprising but inevitable conclusion offers a peculiar and satisfying peace.

Rumor long has had Pynchon at work on some massive saga about American history and the Civil War, and I hope, if it’s true, to see that novel someday. But I was delighted with Vineland. The bureaucratic complications – Pynchon loves to detail crazy spy-novel agencies hell-bent on Dr. Strangelove-like plotting – don’t seem as far-fetched as they did in his earlier novels because they turn out to be pretty much true, and never truer than during the past decade.

So the novel is a comfort, insisting that things could be crazier still. It’s a complicated bouquet he’s tossed us as if to celebrate our survival of those eight years of Reagan madness, with just enough of a chill worked into it to keep us on our toes through what’s to come.