The Trouble with Hitchcock

From the Film Cans Dept.: I noted earlier that I rarely review movies, yet years ago I cherrypicked some good ones to describe and therefore close out this week’s diverse offerings with a pair of such pieces that recently resurface. They’re reviews of two 1984 Hitchcock re-releases, and re-reading them now adds yet another temporal remove.

THE GRUESOME CASE of Richard Loeb and Nathan Leopold, who in 1924 murdered a randomly chosen schoolboy for “intellectual kicks,” inspired a slew of studies and similarly inclined stories. 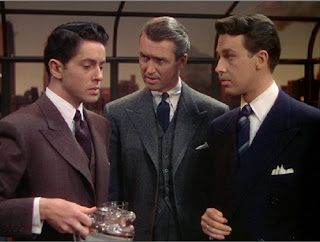 “Rope,” made by Alfred Hitchcock in 1948, was adapted by Hitchcock, Hume Cronyn and Arthur Laurents from a play by Patrick Hamilton. It deals only with the philosophical nature of the killing, which in this case is committed by two college students (John Dall and Farley Granger). They have taken to heart the pronouncements of one of their professors (James Stewart), who maintains there is an intellectual elite that is morally justified in killing its inferiors, and so the movie begins with Dall and Granger strangling a classmate.

One of Hitchcock’s goals in making this movie was to preserve the tension of the play, in which all action unfolds in the course of a single evening. To maintain such a continuum in movies requires no cuts from scene to scene and that’s precisely what he did. In four long “takes,” the movie moves us from room to room in the students’ apartment, and from long-shot to close-up in an uninterrupted flow. Clouds move in a cyclorama seen through a large window and the sky darkens into evening; reel changes are effectuated by panning past a close-up of a character’s back.

What follows the murder is a dinner party for the dead boy’s parents and some other friends, including the aforementioned professor, and a cat-and-mouse game in which Dall slyly tries to win credit for his action.

The small cast is outstanding, with Stewart in an unusual role as the acerbic, brainy professor. Dall and Granger, who have a bit of a resemblance to Loeb and Leopold, had the challenge of bringing out the homosexual aspect of their relationship in a 1948 script, which is low-key and convincing. Sir Cedric Hardwicke and Constance Collier are among the uncomfortable dinner guests.

The touches of style which set Hitchcock’s films so much apart abound in this movie. The best is a lengthy scene of a maid clearing a table while conversation goes on offscreen.

One of the few filmmakers who understood that the camera can do more than take moving snapshots, Hitchcock is well served by the current revival of his classic movies, of which “Rope” is the fourth to come to this area out of an initial package of five. So successful have they been that nine more of his movies may be re-released.

ALTHOUGH ALFRED HITCHCOCK PUT humorous touches in all of his movies, like the pleasant bedroom farce “Mr and Mrs. Smith” released in 1941, nothing could have prepared his audience for the extreme black humor in “The Trouble with Harry.” 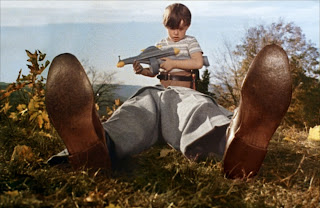 “With Harry,” Hitchcock said. “I took melodrama out of the pitch-black night and brought it into the sunshine.”

The film, which was reissued last week, opens on a gorgeous autumn morning in a little town in Vermont. Jerry Mathers, before he starred in television’s “Leave It to Beaver,” plays a little boy who discovers a dead body in the middle of a field. As the story unfolds, we learn the identity of the corpse, who may have killed him, who did kill him and what an incredible nuisance his remains remain.

Nobody is particularly surprised by it all and the droll dialogue which results is hilarious. We meet the town’s inhabitants, including a modern artist played by a young John Forsythe, Shirley MacLaine as the boy’s mother, Edmund Gwenn as a retired sea captain and Mildred Natwick as the woman he fancies. And you won’t believe the conversation Gwenn and Forsythe have on that subject: the censors must not have understood it.

Hitchcock was a master of eroticism, a quality which works well against other kinds of tension, and “Harry” features a wonderfully bizarre courtship between Forsythe and MacLaine, who are brought together, so to speak, by the dead man.

Bernard Herrmann’s score is quirky, but fitting. The composer later arranged the music for a short suite he titled “A Portrait of Hitch.” And although the whole movie is played for laughs, Hitchcock managed to sneak in a closet door that should make you jump.

In 1956, Paramount had no idea how to promote this strange little movie, often mentioned by the director one of his favorites. Perhaps “Harry’s” time is now – it’s certainly funnier than anything else in current release, and it require nothing more than some beautiful days, a quaint little town, and a terrific script and actors.