Steam Train to the Canyon

Across the U.S.A. Dept.: Another installment from my Ernie Pyle-tribute series of articles chronicling a car trip my wife and I made from New York to California and back. The dateline is Williams, Arizona, and the subject is a tourist train. I wrote this on Sept. 19, 1989. 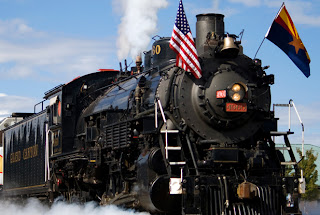 I WANTED TO TELL YOU about an old ALCo steam engine from Schenectady that found a new life pulling Pullmans on a scenic ride to the Grand Canyon. Folks in the little town of Williams got pretty excited about the service, a revival of something abandoned twenty years ago.

The train buffs, and a lot of them showed up for the inaugural journey, identified the four steam locomotives as being variously from Schenectady and Pittsburgh. No two were able to agree.

I've now got it sorted out. Actually, Gary Bensman, the Grand Canyon Railway's chief mechanical engineer, knew it all along. So did John Nelsen, archivist for the ALCo Historical Society, who lives near Albany. The engines were all from Pittsburgh.

“If it's any comfort,” said John, “they were built from plans drawn up in Schenectady.”

One was made in 1908 and three in 1910, and they were the pride of Pittsburgh when they rolled out of the shop. Black as the coal that fired them, these steam engines represented the height of technology. They were built for the Lake Superior & Ishpeming Railroad in Michigan, where they spent half a century moving iron ore trains. From there they passed into private ownership and then the disrepair of neglect.

On September 17, 1989, the engines and newly restored Pullman cars began their new service. The engines were overhauled and polished and they burn oil instead of coal, and the one I saw looked magnificent heading the little tourist train.

Many of the local businesses were sporting good luck signs. People wandered through the small town center that weekend congratulating one another. When we stopped to eat at a diner on the edge of town, a couple at the next table hailed us. “Did you see the papers?” the man asked. “We made the front page! Isn't it great?”

“Great thing, isn't it?” the restaurant owner said as he served our food. “We're all pretty proud of it.”

And this was unsolicited. Even the local radio station, playing on a transistor radio on the kitchen pass-through shelf, got into the act, slipping train songs into the playlist. I think I heard City of New Orleans twice during dinner.

The town is named after William Shirley Williams, born in 1787, who worked variously as a roving Baptist preacher and, as he moved farther west, a trapper. He was a loner who apparently met his death in a fight with Ute Indians in Colorado in 1849, where he was buried. But his reputation in the Grand Canyon area was enough to warrant naming not only a town but also a mountain and a river after him.

And, as you amble along Bill Williams Drive, there's the possibility that you'll see some of the Bill Williams Mountain Men, dressed in trademark buckskins.

Williams hangs on hard to its history—it was the last town on the old Route 66 to get bypassed by a freeway.

Tourism is the principal industry here, and the new railway service has sparked some ambitious planning to draw even more attention to the town. An American Old West theme park is on top of the list, with the somewhat incongruous juxtaposition of a Native American cultural center and a 400 room resort/RV facility.

You don't think of it to look at this charming little village, but of course that's what it lacks. A few modest-sized motels provide lodging, and restaurants are small and simple. Our VW camper is an unusual sight on the street, where most of the traffic is made up of the likes of pickups and Novas and a few smart, compact late-model cars.

Which is to say there's nothing phony here. Nothing pretentious. The local pride in the new old railway is sincere. It's a significant accomplishment both in terms of the effort and potential. The town needs more tourists and will be happy to have them.

The trade-off? As soon as that theme park goes in, Bill Williams Drive will have to accommodate Winnebagos travelling two abreast. It's the problem they face at the Grand Canyon's nearby South Rim, where congestion is horrendous as tourists struggle to catch a glimpse of the mighty monument.

Williams is a half-hour away by car—if the traffic is moving. By train it will take a little longer, but at least you know you'll get there.

The first trial train trips along the long-disused tracks were taken a little slower than usual. Wildlife had to be re-routed and branches cut back. But the official inaugural trip was then sent off with music and speeches—the same kind of ceremony that happened 88 years earlier.

We got to town too late to take that trip, which was anyway filled with more deserving passengers, people who'd been anticipating it for so long. We did see the return of the beast, however, and it was a thrilling sight.

The sky had taken on the golden-grey autumn colors peculiar to the western evening, with a few high clouds silhouetted against twilight. A steam whistle sounded in the distance. People hurried to the platform to welcome the travellers back.

Like the demise of silent movies, the passing of steam locomotives was inevitable but unfortunate. The sense of power conveyed by that huge, billowing stack is an impressive illusion that dwarfs the far more powerful but dull-looking noses of modern diesels. And, silly as it sounds, this really is a choo-choo train, with attendant sounds and evocative antique appearance.

All at once it was on top of us, black locomotive hauling green Pullmans, slowing at the platform where news cameras and well-wishers waited. For a moment, if you were really caught up in the magic of it all, you expected to see high-button shoes and spatterdashes emerge first from the cars, followed of course by bustles and sponge-bag trousers.

“How was it?” The question was asked of everyone, and answered with a variety of superlatives. Except for one very young man, obviously fed up with the enforced excitement of it, who unerringly gives the proper answer. “It was a train ride,” he said.

Today's traveller takes for granted the perks and distractions modern conveyences force upon us as we're hauled as speedily as possible. The pleasure of travel itself has been obscured by the imperative of the destination. In short: You don't get train rides any more. He was a pretty lucky fellow.