From the Vault Dept.: I’ve been reprinting pieces describing my 1989 cross-country trip in a VW camper. A year later, I rode the train to Minneapolis. Here’s my account, as it appeared back then in the Schenectady Gazette. I regret to note that the accommodations offered for overnight rail travel have changed since then, and not necessarily for the better.

IT’S CLOSE TO MIDNIGHT. The Mississippi River is a dark presence, sparkling under streetlights in the distance. The rhythm of this train is changing. Not slowing, exactly, but ringing with syncopated clanks and sounding the whistle more often as we whisk over urban railroad crossings. 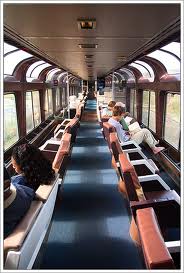 Which also takes us by the insistent bells at the crossings, changing in pitch with the Doppler effect as we pass them. It’s a sound unique to railroad travel.

I’ve been on the train for 24 hours now and I’m sorry the ride is ending. In a week, I’ll be taking the reciprocal route back, which will be a nice climax to a working vacation. I’ve discovered something that makes vacationing – and working –  more fun: the quality of travel can be as enjoyable as the destination.

Forty years ago, the highway became king and passenger rail service began to flicker out and die in many little towns and cities. Affordable air passage made it seem imperative to get where you’re going as fast as possible.

But the train has never lost a certain romance, a certain elegance. And Amtrak, the country’s principal passenger carrier, is unique among government-sponsored corporations in that it has been making money recently. It’s also hoping to break away from that subsidized status entirely in corning years.

Service and equipment have been improved considerably over the past decade. I began regular train travel just before Amtrak came into being and saw the last vestige of the old-world style, when real flowers graced the linen in the dining car and food was fresh and cooked to order.

For a while, train service was threatening to imitate the airplane’s pre-fab approach to amenities, with microwaved food and plastic everything. I’m happy to report that things have turned around. The flowers still are plastic but once again there is spanking clean linen and unexpectedly good fare.

My trip began on the Lake Shore Limited, the New York-to-Chicago train that picks up cars from Boston at the Rensselaer station before arriving in Schenectady shortly before 11:30 p.m.

For me, this is a great time of day to begin a trip. I’ve put a day’s work behind me and am ready to unwind a little – read, write – before going to sleep. When the sun comes up, I’m in Ohio with a good sense of progress behind me.

I’m much too large to sleep in coach and I prefer to be as horizontal as possible while dozing. So I took an economy slumbercoach room as far as Chicago. It doesn’t add a lot to the fare and more than makes up for the fee in comfort and privacy.

Early in the century, Pullman-style accommodations dressed each side of a car with upper and lower berths shrouded by curtains. They were the economical style of long-distance travel (and the subject of many an old-movie gag). Now the roomette has taken its place and it’s a marvel of engineering. Look for the staggered windows of roomette cars when a slumbercoach goes by. The room is shaped like an L, but every other one is inverted, with sink, toilet and bed arranged to dovetail with the adjacent berth.

By day you have a seat near a window; unlatch and swing aside some hardware to change it into a bed. It’s small but accommodates all 6-feet-4-inches of me with an inch or two to spare.

What takes getting used to is the noise and sway. I suppose every form of travel has its terrors; successful train sleeping requires you to understand that the car will pulse and surge and will not topple over and, just as you’re getting used to that, another train will draw up alongside with a horrifying roar, vigorously popping you out of dreamland.

The landscape of train travel is unique, carrying you through cities and towns, along junkyards or rivers and often through a series of backyards. Towns used to be founded near the tracks and these areas are often the first to be neglected as a village grows. Cities are fascinating to see from this vantage. Cleveland, for instance, is a startling mix of architectural styles.

A concession to the stimulus-starved traveler is the TV set in the lounge car, which plays recently released videotapes. That’s also a car where sandwiches, chips, soda, and candy are available for most of the trip.

For me the high point of a train trip is a dining-car meal. There you find a social system that might be considered shocking in a restaurant: you’re seated where the car manager decides to put you and it’s probably going to be at an already-occupied table until a foursome is made.

My breakfast companions, Ida and Bill, already had befriended single-traveling George when I joined them. “Granddaughter’s getting married,” Ida explained. “We always prefer to take the train.”

Chicago was their destination. George, a large, florid-faced fellow, would ride on to Seattle for a vacation trip he makes annually. Conversation was easygoing, small-town-like, the easy rhythms of talk among neighbors.

For me, this is the biggest difference between train and airplane travel: a train can be a social event. Between Schenectady and New York you won’t get that sense because that’s commuting travel. Head west, however, and there’s a sense of adventure.

“Eastern service is nothing,” said George, stabbing a stack of tasty pancakes. “Wait till you change trains.”

The Lake Shore Limited terminates at Chicago’s Union Station. From there on west the equipment becomes larger and more comfortable. The Empire Builder departs at 3:15 p.m. and, 24 hours later, is scooting across Montana, arriving in Seattle the following morning at 11.

As we left Chicago I got a glimpse of a recent return to rail luxury: a suite of cars (or, more properly, cars of suites) that are pulled by Amtrak between Chicago and Washington (District of Columbia) and offer the style and spirit of the old Orient Express with gourmet food, live entertainment and other snazzy kindnesses.

But George was right about the muted luxury of the regular equipment: coach cars have two levels with a nice view from the top. Each train also carries one or more observation cars (the “sightseer lounge”) with a dome of tinted glass affording a gorgeous panorama of the countryside. I played hookey from my seat for most of the trip to sit in one of those.

First-class accommodations also are fancier, with more alternatives to choose from. My favorite is the family bedroom, a space that stretches the width of the car with windows on both sides and a sofa and chairs that convert to upper and lower berths.

“Can’t run these cars in the east,” a conductor explained. “Bridges aren’t high enough.” Nevertheless, there are a few eastern routes upon which the dome coach, a smaller version of the sightseer lounge, is available.

What do you do on a long train ride? It’s an important consideration for the jet-accustomed. At the top of my list is, simply, to relax. Getting through a lengthy novel is next in line, while a laptop computer offers the option of getting work done without the pressures of an office
around you.

Travel is nothing without a meal. Or two. First call for dinner was sounded as we approached Madison, Wisconsin. I waited until the second call just outside Wisconsin Dells. This time, my companions were a father and son. The boy was going to begin a stint of military service soon so they were getting in a leisurely trip before he departed.

The sun touched the horizon as we finished dessert, spreading a gorgeous orange hue across the sky. It was an Impressive sight and, like the best of attractions, it seemed to haive been placed there just for us.

“It’s beautiful,” I said to our-waitress and then got suddenly self-conscious for gushing so uncharacteristically. “I guess you get used to it after a while, though, don’t you?” I added.

“Get used to something like that?” she said. “Never. How could you?”