“WE’RE A FAMILY and we perform for families,” said Nino Zoppé as we crowded the gate outside the circus tent. “We do this the same way we’ve been doing it for a hundred and sixty years.” Meaning small-scale. Intimate. 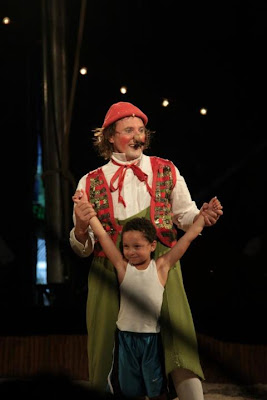 Even before the start of the show proper, he’d presented an array of jugglers and tumblers, and a sad-faced accordionist who led the crowd in singing “That’s Amore.”

The Zoppé Circus hit town courtesy Proctors Theater, with a single-ring tent conveniently fitted into a field across Broadway from the theater complex. Amazingly but, in the end, not surprisingly, the performers working the crowd were the same we’d seen for two days preceding the opening putting up the tent, painting scenery, getting things in order. Soon enough we’d see them working the trapeze, ropes, and trampoline inside.

“We’re not a big, flashy circus with special effects,” Nino went on. “We’re not a French dance company masquerading as a circus.” He punctuated that last crack with a triumphant “yes!!” gesture of the forearm. We understood what he meant.

Inside, the ring sported a fresh layer of sawdust. Popcorn and lemonade awaited. The bleacher we climbed had a stitched-together look. But when we settled in and the lights dimmed and a cantering horse was released into the ring, a couple of hundred years dropped away and we succumbed to a kind of entertainment that cheered people like us long before electrical-based technology took over.

There were lights and amplification and a pre-recorded soundtrack, and that’s about all. Everything else was based on pulleys and ropes and timing and skill. And, as Nino demonstrated, an ability to amuse a crowd with hobbledehoy charm.

Nino is Giovanni Zoppé, whose father, Alberto, came to the U.S. from Italy in 1948 to appear in the movie “The Greatest Show on Earth.” But the Zoppé circus was started in Venice in 1842 by Napoline and Ermenegilda Zoppé, a French clown and a Hungarian ballerina who eloped to defy her parents.

Venetian commedia dell’arte traditions inform the show, as Nino, in friendly clown makeup and costume, tangles with the white-faced, coned-topped, forbidding looking Papino (played by Jay Walther – the accordionist we saw outside). There’s a Laurel-and-Hardy aspect to the duo, although I know I’ve seen the spirit of Papino in more than one maître d’.

As Giovanni explained in an earlier interview, “Nino is the red clown and Papino is the white clown; therefore, they don’t get along. It’s a classic Italian Renaissance story.”

Walther is married to Tosca, Giovanni’s sister, who performs a dazzling acrobatic routine atop of a pair of draft horses driven by her husband. And she’s an aerialist, looking frighteningly calm and beautiful while twirling, ankle-supported only, on a rope high overhead. 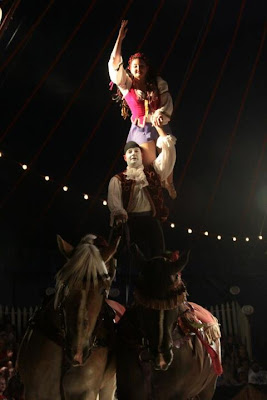 Early in the act we see Carla, another sister, working with her husband, Rudolph Heinen, and a troupe of eager dogs who jump and dance and fly through the air.

This may be where the secret of the appeal of the circus truly lies. It comes from an earlier age when we really did have to face down the forces of nature we needed to tame in order to pursue our lives. The circus animal trained to do our bidding suggested (for good or bad) that some form of mastery was available.

The juggler keeping aloft seven fiery clubs – as did Gena Cristiani, herself part of a long circus family legacy, and a distant Zoppé relative – excites us with the danger even as she tames our deepest fears. The trampoline artists – also Cristianis – didn’t get the most difficult stunt right the first time they tried it. Or the second. But on what was announced as the final attempt, a serious jump and a crazy-looking triple spin planted one of the acrobats atop the shoulders of another. Persistence pays off.

A few lucky people got to be part of the show. Nino has crafted a routine involving a broom, his hat, and a helpful child who makes many sincere efforts to get that hat past Nino’s apparent dim-wittedness.

“But it’s not just for kids,” Nino is quick to say, and he’s absolutely right. I had more fun than I could have anticipated, and I’m awed by the utter simplicity of it all.