From the Film Cans Dept.: Why don’t I review movies? Because I enjoy them too much. Good movies, that is. I’m not mentally prepared to have the summer blockbuster shit thrown at me. This means, of course, that I’ve missed out on the press junkets with which the Hollywood Hype Machine dazzles small-market rube writers with big-time stars. On most of the few assignments occasions on which I did review movies, I attended early-afternoon press screenings, but with the looser deadline of a weekly, I had the option of sitting with civilians. Which I took one evening, under the impression that my editor had set things up for me at a local mall multiplex. The box office didn’t know I was supposed to be comped in, nor did any usher. I was handed to the night manager, a gawky teen named Ed, who explained that he knew nothing about this and really, really couldn’t just let me in because I could be just anyone trying to get in for free and he could lose his job and . . . I gave up. A fitting end to my film-reviewing career. But here’s a sample. 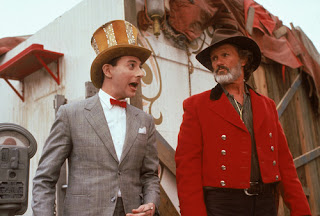 With Pee-wee Herman, Paul Reubens propelled himself from talk-show oddity to star of his eponymous Playhouse. But he also made an excellent transition to film with Pee-wee's Big Adventure, a throwback to the formula of the 1930s that skillfully combined scenic design, timing and music with a throwaway plot for an episodic, hilarious result.

Don't expect quite the same from Big Top Pee-wee. Reubens and company give us the same elements as were used in the Big Adventure, but with one notable exception: it's safer going. Even Danny Elfman's marvellous music is a little less quirky this time.

Pee-wee was the town favorite of the first movie; he's overstayed his welcome in Big Top. The unnamed midwestern town is a marvellous creation, literally a place that time forgot. The cars are old; so are the magazines on the newsstand.

We begin with a typical Pee-wee morning, this time on the farm as he and his pet pig, Vance, tend to the barnyard and continue what should be a Nobel-prize-winning research product. Then there's lunch with Winnie (Penelope Ann Miller), Pee-wee's blonder-than-goodness girlfriend. 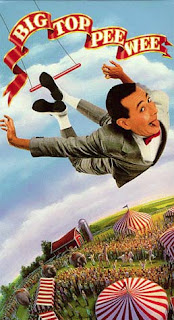 Yup. Even as we marvel at the improbability of this courtship, it's a great send-up of film courtship in general. And when the circus (literally) blows into town, the parody gets better: Pee-wee falls for an exotic trapeze artist named Gina (Valeria Golino, making her American film debut) whose very perspiration glistens alluringly. Lampooning every Dorothy Lamour film – and his own Blue Lagoon – director Randal Kleiser summons an idyllic tropical paradise in the midst of the plains for the lovers to wander. But the romance is still a surprise, as surprising as when Woody Allen started to get the girl.

When character is sacrificed to plot, the movie drags. Kris Kristofferson is typically low-key as Mace Montana, ringmaster and general manager of the outfit, giving us rugged, quiet idealism where a more eccentric character might have been entertaining. Likewise, the entire collection of circus oddballs is only paraded in front of us, never used to promote the action.

By the time we reach the song-filled finale, it's not the exhilarating release the writers (Reubens and Playhouse-partner George McGrath) must have intended. Because a comedy circus can only climax in chaos (as when the Marx Brothers got hold of one).

Big Top Pee-wee is a likeable film, and probably would grow on you after a couple of viewings. It's in the funny position of being too subtle at moments for the kids, even while offering that most kid-specific entertainment, the circus. Perhaps Pee-wee is growing up a little too fast.