The Fiction File Dept.: Before it became an official alternative newsweekly, Albany’s Metroland Magazine published all manner of oddball stuff, including, from time to time, my fiction. Here’s one such piece that appeared in March 1987, its framing device and tone swiped from P. G. Wodehouse, a fairly thin-on-plot little number.

“THE GREAT OUTDOORS! The wide-open spaces!” Uncle Ned thrust out his arms as if to embrace Mother Nature and threw his knapsack out of balance, sending him backwards into a nest of nettles. 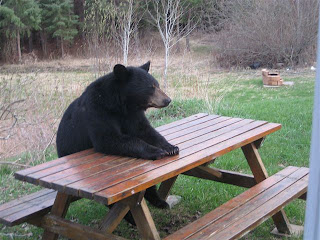 It was a crisp spring day not long ago when he decided that I should accompany him on a hike “into the verdant bowers of ruralia,” as he put it, meaning up the hill at north end of town.

Between us we carried a cookstove, a small tarp, poles for the tarp, two medium-sized pots, an iron skillet, a coffeepot, coffee, two collapsible chairs, an even more collapsible table, and what seemed like fifty pounds of food. “We won’t go hungry,” he had declared at the outset.

“I don’t understand why you won’t go some real forest,” I complained. “We’ve got the Appalachians on one side  the Adirondacks on another.”

“Don’t talk to me about Adirondacks!” He slipped off his pack and shook a finger at me. “I might have married the sweetest woman on earth if it weren’t for that damned wilderness! Did I ever tell you about Betsy and the bear?”

BETSY BARBERY WAS A vision of peach-faced loveliness (Ned began). When I met her she was a bank teller at the Clearwood Savings, and she helped me out with a small loan. Actually, the bank itself refused to lend me money, but she advanced a ten-spot of her own that helped me soothe another, much meaner creditor. She probably saved my life, but we won’t go into that.

It suffices that she was an understanding woman, a tolerant woman, a single woman.

I entered her life at the right moment. Our association began with a walk or two, and progressed (as such associations will) to the local film palace, an establishment that honored my frequent patronage and occasional custodial duties by waiving the entrance fee. It continued with quiet suppers at those hostelries enlightened enough to understand that my shortage of funds in no way diminished my appetite, and that the tab was an investment in my future.

So. Betsy, as I say, understood my way of life. Even better, she evinced no desire to change it. This was not my usual experience with the fairer but, alas, often hoydenish, sex.

Can you blame me, then, if marriage came to mind? In the heart of winter your thoughts are of nesting. You burrow away from the cruel outdoors. Betsy and I shared many a warm, fireplace-lighted seat, laughing over mugs of toddy, sketching our perfect future.

She, it turns out, was a camping buff. And I, who had previously slept out of doors only when forced to by intoxication, agreed to a camping expedition in the Adirondacks.

Betsy outfitted me with cast-offs left behind by a former boy scout of her acquaintance, a suitor who had proved himself neither trustworthy nor loyal, never mind the “thrifty, brave, etc.” part of
the promise.

The drive was an enchantment. As Betsy terrorized the Northway with her delightfully un-ladylike driving, we chatted like husband and wife, discovering those details that make magic of a relationship: the shared dreams and fears, the ambitions and pleasures and so on.

Betsy drove deep into the woods, taking the farthest site on the property, and here we parked and placed our knapsacks.

And here we discovered where communication had gone awry. I had agreed to provide breakfast, she our supper. But her foodstuffs were packaged in bags of plastic, powders that revealed their essence only by a promise on the label. Eggs, beef, fruit – all of it shriveled like so much jerky.

“You weren’t supposed to bring fresh food!” she cried as I withdrew bacon, sausage, cream, etc. from my sack.

“I didn’t know there was an alternative,” I confessed.

“Oh, my God, we have to get rid of that stuff.” she shouted.

Bears. Funny how a comical-sounding word conjures only an image of trouble in the right setting.

“They’ll smell this stuff and be all over the place!”

“I know what we’ll do,” I said. “So as not to tempt the beasts, we’ll have breakfast for supper and eat your food tomorrow morning.”

The air was warm and the day was long; it wasn’t until the middle of the evening that we started cooking our unusual meal. Then the next bit of trouble occurred.

It was simply our, or I should say her, reaction to the aroma of frying bacon. “Every bear for miles around can smell this,” she muttered.

“You have nothing to worry about,” I said nobly. “I’m here. I’ll protect you.”

“That’s nice.” She snuggled against me.

The skies darkened quickly and brought a chill. Our fire had consumed all of the wood we gathered. We wanted this flame to last as long as we could tend it, so we went off in search of kindling.

And all hell broke loose.

It came from those deceptive skies, and it was a cloudburst. It caught us as we had wandered apart, and it obscured my vision and encouraged-my already-rotten sense of direction. In short, as I tried to find the campsite I only grew more and more lost.

The mists cleared slightly and I thought I saw Betty moving a scant few yards away. I called her name and the figure turned to look at me. I honestly thought, at that fraction-of-a-second of first sight, that it was a guy in a bear suit. It didn’t look real. I watched, frozen, as the giant figure turned again and lumbered away.

I crept in another direction. It probably took me all of five minutes to find the campsite, despite the several hours it seemed, and I approached with a new wariness. My caution was rewarded: through the steady curtain of rain I could just make out the figure of another; bigger bear crouching by my knapsack.

No sign of Betsy or her pack. Had she made it back to the site? I moved slowly around a wide circumference and could see another bear at work at the campsite’s edge. This one, I now saw, had dragged Betsy’s pack behind the trees and was pawing through it, no doubt as fond of the dried-out little packages as it would have been of my bacon. Only the fact that we ate my meal first saved my pack from destruction.

It was an irony hard to enjoy as I waited and worried about the woman.

I moved again. The distant beast must have seen me, for it dropped the pack and crept back into the woods.

I hunkered down and waited, my cold clothes clinging, as the rain continued to fall for another eternity. Then a flash of lightning lit the campsite and the great bear was revealed to be a Volkswagen, and I understood that I had approached from a different angle and forgotten all about the foolish car.

I sprang into the center of the site and grabbed my pack; I continued to the far edge of the woods and rescued Betsy’s, but it was too late: the beast had dragged the contents out and scattered her stuff all over the place, and it was too dark now to see what was where.

The car was unlocked, so I climbed in. Everything in my pack was also soaked. Being out of the rain, I started to shiver. I found an old blanket in the well behind the back seat, stripped, and wrapped myself in the warm wool.

And locked the doors.

It was probably less humiliating to be discovered naked by the ranger than it would have been if Betsy found me. “You lose your wife?” he asked in annoyingly jovial tones. “She’s up at the cabin. Come with me. I’ll get you some clothes.”

He dressed me in flannels and jeans. Betsy was drinking coffee, dressed exactly the same. She seemed okay while we sat in the cabin. I figured anyone who was out in the rain all night would be somewhat subdued. But as we headed back to the site, she turned on me.

“Where were you to protect me?” she demanded.

I described how badly lost I’d become. “That’s great,” she said. “Because there was a bear here, you know.”

“After I scared the bear away.”

That’s when she started to hit me. And backpacking gives good upper-arm strength.

“IN THE END, I’M GLAD I SAW THE one bear, anyway,” Ned concluded, “or I may not have believed this could have happened. It turns out that she was the one I saw going through the pack. She wanted dry clothes and her tent. But she thought I was a bear, and that scared her off. When she came back and saw the pack was missing, she ran up to the ranger’s cabin and got him to go out looking for me.”

He turned a pork chop in the skillet and savored its aroma.

“We drove home while it was still dark. She dropped me at my apartment, saying nothing, and would have nothing more to do with me. My financial needs required less and less of the services of a bank, so I never saw her again.”

He added some brandy to the skillet and watched the flames shoot to the sky.

“But I do thank Betsy for teaching me to love the outdoors. My only requirement is that it not be too far from my own backyard.”