OF THE THIRTEEN – make that fourteen – people gazing at some manner of distraction in not-too-crowded subway car (afternoon 1 train south to Houston Street), five of them had paper-based reading material in hand, although one of those paper-based products was the New York Post, so that doesn’t really count. 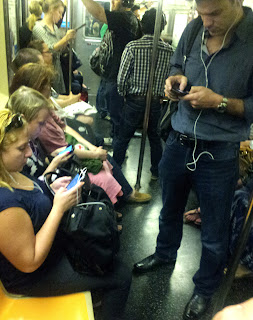 Two of the other nine items were e-readers. The remaining seven were cell phones. There were more than seven cell phones in evidence, but I didn’t count those used solely for aural distraction.

Three of the seven were earbuds-connected to their owners, but those owners also were staring at the cell-phone screens. Of the seven at-the-screen starers, five were flicking thumbs frantically enough to be game-playing or texting, leaving two who might have been using their phones to peruse e-books.

Which meant, according to this most informal survey, that paper-based reading still leads the more newfangled style, albeit by a very small factor. Conversation, on the other hand, seemed rarely pursued, but the noise factor can be inhibiting.

Later, while riding the 2, an express train, from 14th Street to 96th Street, I showed my daughter the anomaly of the 34th Street station. Unlike all of the lines other express stops, which allow you to change to a local train by crossing the platform, this throws you out on the local side – a design instituted both here and at the nearby 34th Street station that runs along Eighth Avenue and serves Penn Station.

To quote nycsubway.org, an exhaustive source for all things subway-related, “Due to the proximity of Times Square and anticipated passenger traffic, the transfer between express and local was discouraged by the layout.” Which I’m not sure I understand, but I’ve long since learned to make my transfer at the 42nd Street station.

We’ve seen very little subway entertainment in the past week, and must assume that the entertainers, as with most other dyed-in-the-wool New Yorkers, have fled the August heat.

But the heat hasn’t discouraged Manhattan’s friendliness. I watched riders help a passenger keep his unwieldy bicycle upright and out of the way in a crowded car. I saw a fellow who clearly was a stranger to his seat-neighbor offer help with the neighbor’s cell phone. And I was warned away from a seat the puddle on which I hadn’t spotted before I began lowering my haunches.

The tourist population may be a little smaller than usual, but they’re still thronging Times Square of an evening, and I challenge myself, especially when on the subway, to guess their countries of origin. Last night I was almost stumped. A dozen teenaged girls entered the car, chattering, looking very white-bread America in visage and dress. Their words were unintelligible, but I couldn’t even detect a pattern of dialect.

I edged a little closer. Words themselves remained elusive even as vowel sounds were revealed. I caught something familiar: the word “like.” I moved closer still. They were speaking English. They had all but obliterated the consonants. I’m guessing it’s a subway patois, a way of shrieking above the noise. Not one of them was wielding a cell phone.