From the Music Vault Dept.: The now-defunct classical-music website andante.com had an ambitious program of surveying concerts and recordings from around the world. Here's another one of my contributions – a review of a reissued “Trionfi,” three cantatas by Carl Orff, as recorded by a conductor who'd worked with the composer.

THESE 1950s-VINTAGE RECORDINGS arrive with the composer’s imprimatur, but it’s the prim part that sticks out. Both the antique recording technology and a characteristic restraint in the performances diminish the orgiastic excesses of the works. 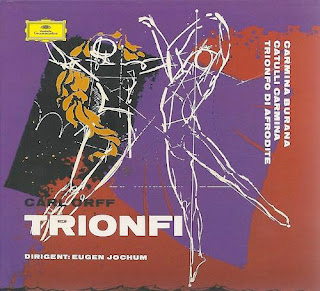 “Carmina Burana” is far and away the best-known work of the three. It’s also the oldest (from 1937), longest, and most innocent. Even so, its text, drawn from 13th-century Bavaria, depicts a festival of drink and debauchery, and it inspired Orff to concoct a setting he intended as the musical portion of a theatrical event.

Chorus and orchestra are augmented by three vocal soloists, of whom baritone Hans Braun is surprisingly ineffectual, sounding downright wimpy as the drunken Abbot of Cucany during the “In Taberna” segment.

There’s no question that the orchestra rocks, distant though it sounds, and Jochum brings shades of portamento that would work very well against the slashing rhythms of the piece. But audio quality ultimately betrays this “Carmina Burana” the most. The main problem stems from the original recorded balance, placing the orchestra way too far behind the singers. But the 1952 mono recording also suffers the now-too-common “restoration” phenomenon of having a phony, distortion-speckled mock-stereo spread imposed.

That dab of mock stereo is also true of the other two works in this set, which were recorded in 1954 and 1955, but the choral/instrumental balance is far better. “Catulli Carmina,” showing its debt to Stravinsky’s “Les Noces,” uses a large percussion force that includes four pianos (although three-fifths of the piece is sung a cappella), while “Tronfo di Afrodite” goes back to full orchestra with the singers.

Thanks to its unusual orchestration, choral demands, and general explicitness, “Catulli Carmina” goes unperformed except at university settings. Written in 1943, it surrounds Latin verse by Catullus with a ribald prologue and epilogue penned (in Latin) by Orff himself, with a text considered so obscene by some that it wasn’t even published with the score until decades later.

Although Jochum wasn’t known as a champion of new music, he was a friend of Orff and obliged with a recording of this work. Someone – the devout Jochum, perhaps? – objected enough to the Prelude’s tribute to the penis (“O tua mentula!”) that the Latin lyrics in that section were changed for this recording. Hard to tell how castrated it got, though, because no texts are provided for any of the works on this set. This is becoming annoyingly common with budget-priced sets, but what does it really save? Decca’s Compact Opera Collection puts the libretto right on the CD as a pdf file; texts also could be posted to a website.

The chorus is slightly ragged negotiating the fast clip and tongue-twisting turns of their material, but soprano Annelies Kupper and tenor Richard Holm are superb. Kupper returns in “Tronfo di Afrodite” to render the finest set-to-music orgasm until “Sweeney Todd”; bass Kurt Böhme is especially outstanding, and the other soloists, chorus, and orchestra make the most of this least-performed corner of the triptych. Dating from 1953, the work depicts a wedding night and uses poetry by Catullus, Sappho, and Euripides to sing the praises of venery.

If you like the rhythmic, harmonically static Orff sound, all of this is rousing stuff. “Carmina Burana” is weakest, but there are plenty of other “Carmina”s out there, including Jochum’s own stereo version from 1968. “Trionfi”s are harder to find, so this set has the obvious advantage of availability. It’s especially worth having for Orff or Jochum fanatics.