IN AND AMONG THE trendy, the take-out, the tortured eateries that take up a considerable amount of Manhattan’s real estate is any number of diners. By which I mean places that serve breakfast for some or all of the day, that offer little in the way of ambiance, that may make a fairly decent Greek salad, and that don’t necessarily mind if you hunker over a cup of coffee for a while when the place isn’t busy. 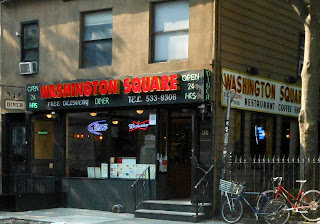 These are not to be confused with places like Ellen’s Diner, at Broadway and 51st, which dresses itself with self-conscious irony and charges you for it, or places like the venerable Carnegie Deli, at 55th and 7th, which is a deli.

During a recent week in Manhattan, I found myself in four different diners for various reasons. Each of them was comfortable; each offered a good-enough menu with reasonable prices; each was served by a staff that couldn’t have been more accommodating.

Like the Washington Square Diner, at the corner of 6th Avenue and West 4th Street. The place has no website, which augurs well. It has a long (if vague) history in the neighborhood. It’s open 24 hours a day, which is how it became the place that whipped up 350 sandwiches in the middle of the night for transit workers dealing with the onslaught of Hurricane Irene last summer.

Nothing special about the scrambled eggs. I expected nothing special. But the coffee was good and got refilled whenever necessary by a busy server who seemed glad to have us there.

Like the server at the Utopia Diner, up on 72nd Street at Amsterdam Ave. A middle-aged fellow with a greying goatee, he knew many of the late-morning customers and was a catalyst for conversation between counter-neighbors.

Walk west along 72nd from the park and you pass one tony apartment after another. It isn’t until you cross Columbus Ave. that shops spring up, and by the next corner, at Amsterdam, you get the sense that the not-so-wealthy are welcomed.

I went from coffee and a light breakfast and a pat on the shoulder from the server at Utopia to the more astringent ambiance of Aroma Espresso Bar, around the corner, which was overpriced and lacking in anything approaching cheer, its counter staffed by mumbling students. 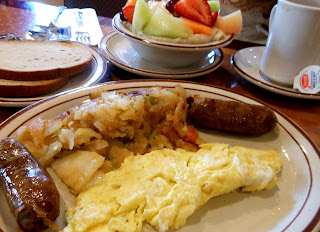 Better to meet a friend farther up the West Side – at City Diner, at the corner of Broadway and 90th. It’s a little fancier, as a neighborhood like that would demand, but once we got into small talk with our server, any pretension melted away. Rain had begun to fall, so we compared weather characteristics of familiar parts of the East. Should have been boring, but the waitress brought a marvelous sense of humor to the exchange.

Back in SoHo, we lunched at a place that I got to know while shepherding a show I wrote to life in the neighborhood. The Vandam Diner is on Vandam St., just off 6th Ave., across from the SoHo Playhouse. Cash only, but free WiFi. A traditional menu, but I had a great bowl of gazpacho there. And once again, the spirit of friendliness was startling. After my second visit, I was assumed to be part of the neighborhood. I’ll work on that.
Posted by B. A. Nilsson at 10:04 PM