Latin Beat Dept.: How is it that, even as we rocket into dotage, my wife and I can hear music with a characterisitically syncopated beat and break into a rhumba? We don’t dance. For the mental safety of others, I probably could draw a salary for not dancing. Yet the moves have been absorbed into our bodies thanks to a widespread cultural embrace. In my program notes to the 1999 Dorian Recordings CD “Cha-Cha Lounge,” I tried to figure out how that happened. 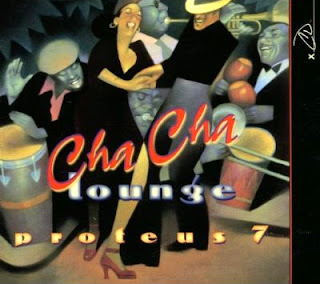 THE CHA-CHA LOUNGE is a fancy nightclub in an unwritten movie. It’s a clash of cultures: Afro-Cuban music and dance in the midst of strait-laced Salt Lake City. In the club is a hot band blasting its pulsing syncopations. And the tunes themselves, in the Perez Prado tradition, pack some surprises.

Weekend Jam, for example, an Anthony DiLorenzo original, opens like a typical cha cha. “Then, in the middle,” Tony explains, “you get this unexpected hit of something out of Herb Alpert and the Tijuana Brass. It’s a little wacky. And you suddenly think, ‘Wow, look at those cats, jamming away in the corner–they’re having a great time!”

DiLorenzo, trumpet wizard of Proteus 7, is also the group’s house composer. For the Cha-Cha Lounge project, he even invented the house. “A buddy of mine in Salt Lake City, where I live, runs a restaurant, and he recently thought about opening a nightclub. This was when Proteus 7 was starting this recording project, and I suddenly saw this movie image of a Latin dance club in a completely incongruous location.”

No surprise that Tony sees things so filmically: he’s a rising star in the movie score business, writing film trailer music for Disney, Touchstone, Miramax, and others. You’ve heard his work in the previews for Deep Impact, Man in the Iron Mask, and Chucky II. Listen to his songs and arrangements on this disc and you know he’s on his way up.

Proteus 7 hasn’t played much in the way of mambos before, but “I’ve never believed in limitations,” says Tony. “I love to do everything. That’s why this group is so exciting. George Clinton was looking for a trumpet player to record music for a movie, a spaghetti western. Did I know that style? Sure, I said. It’s a special sound with a wide vibrato. I’d never done it before, but I could hear it. And if I can hear it, visualize it, I can play it. It was the most fun I’ve had recording a score in a long time.”

Afro-Cuban music has its own special style. It’s in the rhythm. And it’s in the brass. Think of Perez Prado’s horns, trumpet and sax players swaying, ruffled sleeves of their chamarras rippling with the beat. Mambo, salsa, cha cha, samba – even the names of the dances dance, and they all came out of an Afro-Cuban style that has long infected America’s music, pushing away the strictures of European tradition as it rumba’d in with the musical upstart jazz in the early years of this century.

Brass players were there from the beginning: Puerto Rican-born Juan Tizol in the early Duke Ellington orchestra, with his growling valve trombone, acing fast passages right along with the reed section and contributing originals like “Caravan” and “Conga Brava.” In 1939, Cab Calloway put Cuban trumpeter Mario Bauza on the stand. Bauza eventually would join his brother-in-law Machito for a 35-year stint with that ensemble, but during his brief stay with Calloway, he persuaded the bandleader to hire a young Dizzy Gillespie.

Gillespie’s tenure with Calloway also was brief – Cab fired Diz after getting hit with one too many spitballs – but Bauza, Gillespie’s on-the-road roommate, inspired in the other trumpet player a lifelong fascination with Afro-Cuban music, and introduced Gillespie to percussionist Chano Pozo. Listen to Gillespie’s 1947 recordings with Pozo in the band and hear an exciting new energy fire the bebop movement

The Latin influence swept into American popular music through other bands, too. Spanish born, Cuban- (and Brooklyn-) raised Xavier Cugat formed a group in the ‘30s to play tangos, but ten years later he had hits with Brazil and “The Breeze and I” (from Lecuona’s Malagueña.) These were popular enough to warrant covers by Jimmy Dorsey’s orchestra, among others, which also waxed a best-selling Besame Mucho.

Ernesto Lecuona was a well-known concert pianist in Cuba before transplanting to the U.S., where his dance band, Lecuona’s Cuban Boys, gave an early boost to Afro-Cuban sounds. Malagueña comes from Lecuona’s 1919 Suite Española, written five years before his first trip to Spain. By 1943, he was successful enough in the U.S. to bring a symphony orchestra to Carnegie Hall.

And don’t forget Artie Shaw. In 1939, at the height of his popularity, the clarinetist fled the bandstand to hide out for a few months in Mexico, where he relaxed to mariachi bands. He brought back a tune he liked, recorded it with a reorganized band in 1940, and had another huge hit with Frenesi.

In the ‘30s it was the tango. A decade later we danced to a rumba craze. But nothing could match the insane popularity of the mambo in the ‘50s. Perry Como, not the most hot-blooded of singers, had a mambo-influenced hit (“Papa Loves Mambo”) in 1954, so you know that the dance had caught on. In fact, by then mambo bands were established all over the U.S., and fans were dancing to the music of Tito Puente, José Curbelo, Tito Rodriguez, and, especially, Pérez Prado.

The Cuban-born Prado came up with the big band-mambo sound, but the dance itself had a trickier evolution. Much of Cuba’s popular music was born of the combination of African slave rhythms and the songs of Spanish farmers. This offspring was called son, a syncopated rhythm with a percussion-rich instrumentation that migrated at the beginning of the 20th century from the eastern Oriente province to downtown Havana. By 1920, the son was Cuba’s national favorite.

More instruments were added to the band by guitarist Arsenio Rodriguez in the 1930s. He emphasized the call-and-response nature of the music, using trumpets and conga drums to spice up the beat. A rival performer, cellist Orestes Lopez, wrote a dance he titled “Mambo,” although it was Prado who finally gave it a big, fiery sound by adding elements of American jazz.

This had the nasty side-effect of offending a powerful Cuban music publisher, so Prado prudently left his homeland, settling in Mexico City in 1948, where he earned the nickname of “Glenn Miller of Mexico.” As well playing piano and leading bands, he became musical director for and even a popular actor in several Mexican movies. He was signed by RCA Victor’s Mexicana label, and, as Mambo No. 5 headed north, so did mambo mania. From marathon dance events in New York to a religious leader in Peru refusing to give absolution to mambo dancers, an entire hemisphere took notice.

And the word itself? One source finds “mambo” in Cuba’s Ñañigo dialect, as in the phrase used to open Cuban song contests: abrecuto y guiri mambo, or “open your eyes and listen.” Another source may be a Bantu name for a musical instrument, a category that also includes conga and bongo. To Cubans of Bantu descent, mambo also meant “conversation with the gods,” referring to a sacred song. The call-and-response nature has a religious origina, with the call, or copla, intoned by a priest, the congregation singing back the montuno.

The Palladium Ballroom in New York became the self-proclaimed Temple of Mambo, where the Mambo Aces, Paulito and Lilon, and Cuban Pete were among the most renowned, while the star-studded audience included movie stars and musicians–Duke Ellington and Dizzy Gillespie among them.

Proving the multicontinental nature of his music, Prado also had a hit with the South African song Skokiaan, tribute to a peculiar native drink. And these songs persist in many rediscoveries. Cuban Pete already had a pop song past when Desi Arnaz made it a signature tune, and it reappeared most recently intoned by Jim Carrey in the movie “The Mask.”

Which is only fitting, as the movies also helped promote this music. Carmen Miranda, Carlos Ramirez, and Xavier Cugat brightened the screen with syncopated songs. In the Anthony DiLorenzo film, a punchy chorus of brass instruments takes us through a montage of a young composer, sleeves rolled up, trumpet by his side, inking the pages for a tomorrow’s recording session. Then it’s the load-in at the hall, musicians settling onto the stage, tape threaded into recorders. The recording light goes on. It’s a take. Then another.

“I could use a little more Matt and Charlie.” Producer Heather Zweifel’s words reverberate in the Troy Music Hall, where eight musicians are clustered amidst a sea of glittering brass instruments. The seats in the hall are covered with sound absorbing blankets; an array of microphones faces the stage.

“Everything else okay?” asks Tony. He stands to one side of the stage, trumpet in hand. The group is recording his composition Ballad of the Sun.

The air is hot and thick up in the control room, down a short hall from a balcony. But the doors have to be kept closed while recording. Both Heather and chief engineer Craig Dory are studying scores; engineer Joe Korgie sits by a bank of digital recorders, shepherding enough machines to cover the session with multiple copies of open reel and cassette tapes.

The musicians are heard settling into place on stage. “Take 431,” says Heather. Tony counts off the beat, and the loudspeakers – an impressive pair of Waveform towers – kick into life with the full force of the ensemble, their sound nicely shaped by the acoustically splendid music hall.

“That’s great,” Heather says as the segment ends. “Trombone and sax: at 43 and 44, can you really drive those triplets?” One of the players is her husband, Feza, percussionist with Proteus 7. He’s the one who lets on that it’s her birthday today, and the band breaks into a spontaneous chorale. Back to business: “Are you ready to do that opening again? We need to keep together on this.”

“There’s no percussion in this segment,” Tony points out. “Let’s have Feza conduct.” He counts off the beat for take 450.

“‘Ballad of the Sun’ is a little different from the rest of the album,” Tony pointed out later. I imagined a scenario with a really good high school marching band that’s suddenly thrown into playing this Latin stuff. It’s in another unwritten movie.”

After an especially tricky segment of Ballad of the Sun is recorded, the players crowd the small control room to hear a playback. Even though these are professional players who have done this hundreds of times, they share an eager anticipation about these numbers. A window is thrown open, a fan clicked on. The musicians smile. They like what they hear.

This was really fascinating. I like the historical prespective combines with you are there reality.