From the Back of the Fridge Dept.: I’d assumed, when the Hooters in Albany’s Crossgates Mall went belly-up, that the community had outgrown it. Ha! Another one opened a few years later on busy Wolf Rd., and it perseveres. I haven’t visited it, but I’m going to guess that the review I reprint below still applies.

A RECENT EDITORIAL in one of the local newspapers observed that the only people who enjoy what goes on at nude-dancing bars are “its proprietor, performers and patrons.” The same can be said for Hooters. (The same can be said for Proctor’s Theatre, and, jeez, just about any other entertainment venue, but the editorialist obviously was going for an emotional effect, skillful writing be damned.) 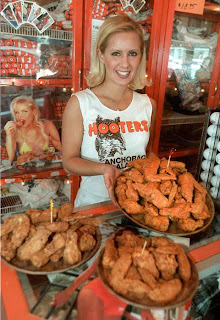 As you probably know, Schenectady’s new mayor is gunning for the strip joints, a reliably easy target, wasting his time and the taxpayers’ money on a fruitless pursuit. Yes, strip joints play up the more annoying aspects of our Puritan sexual heritage, objectifying women into saleable, sensual commodities. But there’s no hypocrisy about what they sell, and there even are touches of the dancer’s art that figure into the entertainment.

Had the honchos behind Hooters chosen to call the place “Nice Tits,” I’d have no complaints. Well: they’d have to improve the food. We’ll get to that shortly. As it is, Hooters plays a stupidly coy game with its name and logo. The prose style of the following, taken from the menu, tells all. “Now the dilemma ... what to name the place. Simple – what else brings a gleam to mens (sic) eyes everywhere besides beer and chicken wings and an occasional winning football season. Hence, the name – Hooters – it is supposed that they were into owls.”

Sophomoric? You bet. That’s the level of humor throughout the place. Hooters is a 14-year-old boy’s fantasy come to life, and what are beer-sotted sports freaks but superannuated 14-year-olds? The waitresses wear short orange shorts cinched at the waist and white tee shirts knotted at the back to stretch the shirt all the more revealingly across the chest. The back of the shirt sports the promise “More than a Mouthful.” Get it?

Those with any cleavage to show show it. But even if your waitress isn’t gifted with a pneumatic bosom, there’s lots of tummy and leg, and the low tables and waitress station requires them to bend a lot. You’ll get an eyeful, and not even Schenectady’s mayor could find fault with the comparatively modest displays. “Baywatch” shows more flesh. Commercialize your hypocrisy properly and nobody complains.

Sure, there have been hiring discrimination suits brought against Hooters sites around the country, a noble but ultimately futile way of fighting this nonsense. A community with any kind of standard of taste wouldn’t let this kind of place open in its midst – but such a community wouldn’t let a Wal-Mart open, either.

Why go to Hooters? It’s in the midst of a gaggle of mall eateries – die-cut places like Ruby Tuesday’s and Bugaboo Creek, where the run-of-the-mill food is still better than what Hooters is serving. So it’s not the pursuit of discriminating dining.

Two reasons prevail. The first one’s simple. There’s a powerful fantasy about being served by an underdressed woman, with the implied possibility of even more service. I’ll admit it: 25 years ago I would have suffered the lousy fare for the ogling potential. But I would have denied the second, more profound reason. Hooters is an outpost of homophobia.

A poster near the mall entrance shows a number of beefy males clad in Hooters waitress outfits, with the caption HEAVEN FORBID! Absolutely. Beefy, sports-minded men don’t look like women and never, ever wear women’s clothing. Nothing faintly androgynous is allowed to mar the separation of the sexes. Because if a man should desire a woman who – because of small tits, slim hips, short hair, no makeup – looks too boyish, it’s horribly possible that such a man might find another (gulp!) man desirable. All the more important, then, to emphasize the differences. Construction-site orange to emphasize the hips. Tight tee-shirts for tits enhancement.

My wife and I visited on a recent Sunday and sat at a table next to a man treating his young, Scout-uniform-clad son to a burger. What a pathetic way to bond with your kid! [2012 note: But how appropriate to Scouting’s homophobia.]

Three large television screens near our table showed us a basketball game; the sound system prevented quiet conversation. A group of men several TV screens away whooped and hollered. It was one of the loudest rooms I’ve ever tried to dine in.

Chicken wings are supposed to be a specialty, but the meat was rubbery and the sauce, despite its claim of spiciness, was bland. The traditional serving of celery sticks was accompanied by a portion-controlled container of runny blue cheese dressing. Susan’s clam chowder was the consistency of wallpaper paste. She followed it with something called a “grouper’s cousin sandwich,” a large fried fish portion served on a roll. Again, its rubbery texture was the most memorable characteristic. It was served with portion-controlled containers of tartar sauce. My chicken Philly sandwich was packed with mushrooms and onions and pepper slices, but lacked a discernible flavor.

This stuff’s not cheap, either. A burger is six bucks; our sandwiches were in the $7-$8 range. Tell Mayor Jurczynski that when I need to ogle female flesh again I’ll patronize the Schenectady strip clubs; being at Hooters is like getting trapped in a football team’s frat house and being forced to watch old Mamie Van Doren movies.