From the Salt Mines Dept.: Here’s a piece that was intended for (the long-defunct) Computer Life magazine, for which I was a contributing editor during a brief time in the 1990s. It seems unfinished and I left it undated and even the file date reflects a disk crash recovery and not the actual time when it was written. How quaint the technology and pricing mentioned below now seem!

AFTER A FEW YEARS of scrounging together my computers from orphaned parts, I awarded myself a fully-assembled, spanking new system. I bought it from a mail-order dealer. I agonized over the price and configuration. In fact, I agonized over it like nothing I've bought before--or since, but we'll get to that shortly. 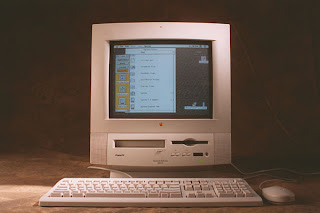 I read the reviews. I considered not-yet-available features: should I wait until they're available? I ran a magnifying glass over the bottom of the ad to make sure I understood the returns policy. Paid down the credit card. Got paper and pencil in front of me. Called the 800 number.

Three grand later I awaited a package that included a higher-capacity hard drive and a tape backup – thanks, Clark the Salesman – and now the torture really began. What if I saw the same system advertised for less even before mine arrived?

My luck held. It arrived a week later. It was still a smart buy. And it remained so until a fresh round of ads appeared in a fresh round of magazines, and suddenly. My system was cheaper. Three hundred dollars cheaper.

Three hundred dollars! Had I waited a month, I would have saved ten percent. Two months would have saved me even more. I got into the annoying habit of thrusting each new ad in front of my wife and complaining, "Look! Now I could get a clock-doubling processor for the same price!" or "They're throwing in a 32-bit graphics card!"

Her counsel was always the same. "You got the best system you could get at the time. Chill."

The annoying use of slang notwithstanding, she actually has the right idea. (Just don't try telling her that after she's bought a car and goes crazy with buyer's remorse.) Any serious outlay of cash is good for the heebie-jeebies. Right after we closed on our current house, my wife and I stood in the front hallway, hand in hand, chanting, "Were we nuts?"

Buying computers, however, is the biggest invitation for buyer's remorse, because the technology changes relentlessly and prices drop with merry abandon. I've helped many friends through the rocky shoals of computer buying, and as a result am the first one phoned when those new ads appear. Until I'm allowed to hang up a shingle to practice computer psychiatry, then, here are a few free tips on coping with the problem.

o Your computer isn't out of date just because new features are out there. It still runs the programs it came with, right?

o Buy a little more than you think you need. Do you think a 500 megabyte hard drive will do? Then get a gigabyte. Does that 28.8 kbps modem cost a little more than you'd care to spend? Try anyway to spend it. It's the most efficient way to slow your steps along the upgrade path. You may think you're buying a computer only for word processing, but you'll be surprised at how many more tasks it invites you to do. Nevertheless,

o You're eventually going to upgrade. This isn't like buying a car, which you drive until the machine becomes unreliable. Computer technology surges ahead quickly, and there are good reasons to keep up with it.

You’re buying a computer, not getting married. You don’t even have to pretend there’s going to be any faithfulness down the road. Think of this new machine as merely a stepping stone to the as-yet uninvented next one.