ABNORMAL OCCURRENCES is being billed as Thomas Berger’s first short-story collection in over thirty years, but that takes into account the small-press run of “Granted Wishes,” which presented three stories from a then-recent issue of Harper’s. All three are included in the new book, along with three new ones in the “Granted Wishes” series. “There are  still a few pieces of short fiction that have gone uncollected,” Berger notes, “but they didn't grab me when I reread them, and I decided to write the new stuff.” 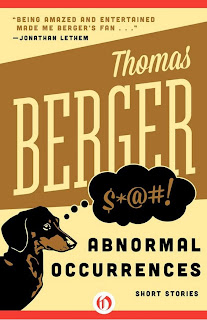 He’s best known as a novelist, although that notoriety is the product of the popularity of the film version of his Little Big Man, the most successful of the quartet of movies his books have inspired. But the fans of his novels, judging by earlier reviews and online comments, are a dedicated bunch, with Jonathan Lethem among the more vocal of his supporters.

This is because the prose in his 23 novels displays a level of craftsmanship that is as masterful as it’s rare, celebrating the power of deft and unexpected combinations of words to tell multi-layered stories with compelling effect. What’s more impressive is that, recognizable as Berger’s style becomes, it’s unique from book to book, each of which is crafted with a particular voice. Thus the dark intricacies of Neighbors has a more contemporary sound than the antique midwest celebrated in Sneaky People; the dystopian future of Regiment of Women has a sense of temporal distance mirrored by the language Berger crafted for long-ago Britain in Arthur Rex.

Abnormal Occurrences is Berger’s first e-book-only volume, published as his novels ease into e-print, available online from the major purveyors. The dozen stories span a wide expanse of his writing career and include works that originally appeared in American Review, GQ, and Playboy, but these are versions that restore material cut from their magazine appearances, with some light retouching to adapt them to the present decade.

When “The Apotheosis of Dr. Poon” first appeared, a half-century ago, it predicted the era of reality TV, a phenomenon now acknowledged in its text, which has been further refined to give some dialogue moments better authenticity.

It’s the penultimate story in this collection, and I suspect that’s no accident. It’s the tale of a television show that takes us into what could seem like a movie version of the Mysterious East were the narrative not so finely crafted that it keeps us from questioning the setting:


Waves of midday heat shimmered above the field like flights of translucent insects. All about us lay menacing silence; even the flies had gone. My clothes, soaked through, clasped me insidiously.

We’re taken out of our culture to witness a bizarre example of what, finally, can only be termed “heroism.” The concluding story, from the Granted Wishes series, is titled “Embittered Super” and suggests one consequence of finding the power to eliminate one’s enemies, with a wonderful kicker of a closing line.

The collection starts off, appropriately, with “Gibberish,” in which the luxury of language is removed from its central character, resulting in a freedom that quickly sours. Defining a relationship with the society of others is a throughline in this collection, as the protagonist of “Ugly Guy” deals with features that are alarming and a stunningly beautiful “TV Star” is troubled by its reciprocal.

The vision of others often provides our keenest insights; thus, Tony Walsh is eager to converse with the surprisingly English-fluent alien-planet visitor in “Planet of the Losers,” a fellow who has space-traveled in a flying saucer but doesn’t even know how to sit. But the visitor proves most humanly disingenuous:


“ ... we were able to come to power only because our old bosses went elsewhere in the galaxy to find new people to conquer and treat like scum. But now we’re in the lamentable situation of being on top, with nobody else underneath us, no inferior folks to despise and mistreat.” He gave me a sheepish look. “I must apologize for lying to you, Tony Walsh. We came here not only to look for food. We were searching for slaves. But it didn’t take me any time at all to see that if you are representative of Earth’s population, we would be savagely whipped if we tried anything here. You have every advantage: you can eat and drink anything, you tame and keep as pet an animal who would otherwise be ferocious, and you have a friend who smells sweet and speaks melodiously. I suspect she’s an example of your females.”

One of the new stories takes on the old premise of discovering one’s dog is articulate with, not surprisingly, surprising results, and “Tales of the Animal Crime Squad” takes our brutish companions even further in absurdity, while slyly observing the resultant corruptions of power. While I wish this volume included more of Berger’s uncollected work, I’m delighted by the philosophical spine that holds it together.

What leaves Berger’s desk is what appears in print. “I accept no editing,” he once told an interviewer, without a trace of self-importance intended. It’s his job to produce the best copy possible. Thus, the stories in this collection all derive from their original manuscripts, the only subsequent changes made by the author himself, except for one:

“The only editorial change I have ever embraced,” he notes, “though it was made by the GQ people without informing me, was the change of title for ‘The Methuselah Factor,’ which it galled me to admit was better than the lame one I had chosen, viz., ‘The Old Story.’”

The multilingual Berger crafts the English language with the assurance of a composer who easily could use the tools of serialism, atonality, minimalism, or any of the other techniques that avoid melody as the principal expression. Had he chosen to use the more experimental techniques of his contemporaries, I suspect he would have won enshrinement in academia.

Instead, he offers his craft in what at first seems to be a mainstream voice, revealing himself as a storyteller in complete control of his narrative who ultimately suggests that language itself may be our greatest gift and most horrifying enemy. Abnormal Occurrences is a great place to start for Berger beginners. If you know his work, you’ve already grabbed it.