HAD SERGEY PROKOFIEV been a nice man, I suspect his diaries wouldn’t be nearly as entertaining as they are. Prodigal Son, the third and final volume, covers the years 1924-1933. The first two similarly fat volumes brought us from the Prokofiev’s years as one of the youngest students at the St Petersburg Conservatory, vying for the attention of schoolmasters and girls, into the fairly quick success he enjoyed as a composer and a pianist, first in St. Petersburg, then in Europe, especially when Diaghilev commissioned the ballet Chout and his opera The Love for Three Oranges caught on (after a disastrous premiere in Chicago). 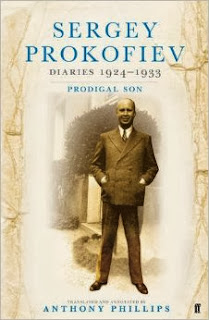 By 1924, the 33-year-old Prokofiev is newly married to an exotic-looking singer named Lina Codina and in the sixth year of a self-imposed exile from Russia. Having traveled and performed around the world, he settles in Paris in time to witness the explosion in creative matters that city inspired and hosted.

His path continually crosses that of Stravinsky, with whom the rivalry is friendly but wary, but not without its barbs. Both are vying for Paris’s attention with 1927 premieres – Stravinsky’s Oedipus Rex, Prokofiev’s The Steel Step – but Stravinsky’s work doesn’t grab the public:


Dukelsky came to dine and asserted that Stravinsky is finished; all that remains is mass hypnosis . . . In the evening a great gathering at Prunières’: Ravel, Falla, Honegger, Koussevitzky, Rubinstein. Koussevitzky and Rubinstein, foaming at the mouth, tore into both Oedipe and Stravinsky’s conducting.


Vladimir Dukelsky is Prokofiev’s friend and compatriot, and later would win fame in the U.S. as popular songwriter Vernon Duke. It’s a dizzying circle of talent in which Prokofiev moves, but Parisian composers – particularly those of “Les Six” – hold for him little appeal:


(May 2, 1926:) In the evening, a concert of works by Auric and Poulenc. The hall was full, and there was warm applause. But my God, what music! It consists entirely of barrel-organ trifles, facile and vulgar doodles in which it is hard to detect any composition at all.

Prokofiev was single-minded in his work habits, and seemed to find no greater pleasure than spending a summer in a French coastal dacha, composing in the morning, hitting the beach in the afternoon. The accounts of him acquiring and learning to drive the luxury car he finally can afford form a peaceful center to what’s otherwise a fascinating story of competitiveness, indifference – his wife and children figure into the diaries as the merest of adjuncts – and, finally, homesickness. (His driving was inconsistent enough to cost him several mudguards and, after an accident in Oct. 1929, the use of one finger for a few months.)

As Prokofiev’s fame increased, so did the pull of his native country. He longed to return to his pre-Revolution St. Petersburg; the Soviet government wanted him back to demonstrate its cultural benevolence and sent emissaries with blandishments.

Recounting his trip with Lina through Russia in 1927 – his first time back in nearly a decade – Prokofiev seems to have no illusions about the country’s repressiveness, but he’s re-meeting old friends and enjoying ovation after ovation as his music is played, often with himself at the keyboard in one of his piano concertos or presenting a solo recital.

He would revisit Russia more frequently, although the diary entries for later visits grow ever more terse – but do the diaries in general, with the last three years compressed into a fraction of the space. Thus, even before he made what’s usually seen as the foolish decision to return to his native country permanently, we lose access to those inner thoughts.

Until then, the journey is surprisingly engaging. As with the first two volumes, Anthony Phillips’s translation is transparent, and the many, many footnotes serve quite nicely to illuminate and comment upon the action. And Phillips couldn’t resist one major (though straight-faced) editorial comment: as Prokofiev and his wife take up the controversial practice of Christian Science, Phillips footnotes Mark Twain’s reaction to the pursuit – and reproduces a wonderfully amusing Twain piece as an appendix.

Nevertheless, as Prokofiev notes in 1929,


... all the work I had done with Christian Science on countering egocentricity, the desire to compete, and envy had borne fruit, and I by now felt I had succeeded in eradicating these flaws.

Which makes him feel ready to extend a hand of friendship to Stravinsky once again. The timing was unfortunate, as it coincided with the death of Diaghilev.


(Lina) . . . could not get over the fact that yesterday, when Diaghilev was lying on his bier, we were sitting here with Stravinsky taking it out of him wholesale. In slight justification I can say that the attacks all came from Stravinsky, but this is scant justification because we were thoroughly enjoying listening to it.

Alongside such gossip, however, is the wonderful sense of walking alongside this unique composer as he creates his music and participates in its performances throughout Europe, Russia, and America, a skyrocket of talent (and acerbic commentary), who soon would literally and figuratively be shut up in Russia.

The final lines of the book come not from the diaries but from a conversation transcribed by the composer’s friend Serge Moreux. As Prokofiev explained it, “I’ve got to hear the Russian language echoing in my ears, I’ve got talk to people who are my own flesh and blood, so that they can give me back something I lack here – their songs – my songs.”