Not So Deep as a Welles

MY MOST ARDENT HOPE, as an Orson Welles fan who lived through the last couple of decades of his life, was that he hadn’t truly become the caricature that was about the only public image of him. For every ninety minutes he nabbed with the likes of Dick Cavett, who asked the right questions and was rewarded with entertaining and not-terribly-true anecdotes, there were hours of appearances as the butt of fat-guy gags with the likes of Dean Martin, Merv Griffin, and Frank Sinatra – not to mention the embarrassing hell of him hawking cheap wine and frozen peas. 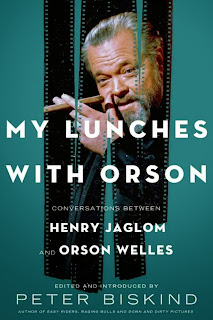 It was all in service of his tireless efforts to raise money for the film projects he constantly pursued, we were told, with chief hagiographer Peter Bogdanovich leading the reassurance brigade. Even as mainstream Hollywood continued to shun one of its few acknowledged geniuses, he found friends in younger, outside-the-mainstream filmmakers like Henry Jaglom, whose uneven but worthy output includes some Welles appearances.

It turns out that Jaglom also was persuaded to help Welles construct an autobiography. Welles wanted his opinions and reminiscences to be recorded, but he didn’t want to be reminded that he was being recorded. So Jaglom was instructed to hide a tape machine near the table at Ma Maison, a restaurant in West Hollywood where the two lunched once or twice a week. The lunches had commenced in 1978, but the recordings were begun in 1983. Two years later, Welles died.

My Lunches with Orson, transcribed and edited by film historian (and superb writer) Peter Biskind, is the fruit of this melancholy endeavor. Welles indeed was playing the role of the fat, forgotten genius by this time, and had been playing it for years, but he was fighting the twin demons of despair and depression while managing to cling to some shards of the shattered dreams that had propelled him since the skyrocketing fame he enjoyed in his youth.

This is a book for the Welles fan already familiar with the filmmaker’s biography – which means tempering Simon Callow with Barbara Leaming and throwing some Bogdanovich in along the way.

Jaglom has the impossible task of drawing out a man mired in self-pity, who nevertheless rises to the task – some could that this is what became Welles’s end-of-life job – of sharing stories about Hollywood in its glory days, with stories about the likes of John Barrymore, Katharine Hepburn, Charles Laughton, and others, although you’re always wondering how much of the story is embellishment.

But you hold out hope that at least the story about drama critic George Jean Nathan is true. Nathan, who lived in Manhattan’s Hotel Royalton, was known for his tight-fistedness, and tipped none of its employees.


After about ten years of never getting tipped, the room-service waiter peed slightly in his tea. Everybody in New York knew it but him. ... And as the years went by, there got to be more and more urine and less and less tea. And it was a great pleasure for those of us in the theater to look at a leading critic and know that he was full of piss. And I, with my own ears, heard him at 21 complaining to a waiter, saying, “Why can’t I get tea here as good as it is at The Royalton?”

There are more contemporaneous observations, such as the anticipation of visiting Joseph Cotten on the occasion of Cotton’s 80th birthday (prompting a recollection about Cotten kicking Hedda Hopper in the ass back in the day), and Welles’s enjoyment at seeing Art Buchwald tear into then-President Reagan at the 1983 Kennedy Center Awards:


... for seven minutes (he) drove it up Ronnie’s ass and broke it off. He didn’t have one joke that Ronnie could even laugh at. He said, ‘And Mr. Reagan ... we have to be careful. We ought not to treat the arts the way you treat Central America.’

Among the notables who stop by the table during the sessions are Jack Lemmon, who barely gets a word in, and Zsa Zsa Gabor, reinforcing her own image as a total waste of ectoplasm. Welles is shown at his most self-destructive in a conversation with Susan Smith (a pseudonym for an HBO exec), who seems prepared to work with him until he fussily sabotages the whole thing.

Desperately unhappy about the failure of his most recent movie, “F for Fake,” Welles is still trying to cobble together funding to finish “The Other Side of the Wind” (reels of which continue to languish in foreign vaults) or to write something new (Jaglom pushed him to write “The Big Brass Ring,” an excellent screenplay that since has been published) or at least to stop envying former partner John Houseman, whose late-in-life success as an actor galled Welles.

In other words, the cumulative effect of the book is a sad picture of America’s greatest film and theater talent, pretending he has not long left in this world, holding court as that caricature he truly became. Biskind presents the material with respect and enhances it with an excellent biographical introduction. It’s a worthy read for the anecdotes alone, but be sure you’ve got some other Welles literature on the shelf before adding this book.

My Lunches with Orson, edited and with an introduction by Peter Biskind
Metropolitan Books, 306 pp.