THE WORLDS OF THOMAS PYNCHON bear very close resemblances to the worlds we know, although once you journey through a Pynchon timescape, you’ll question the authenticity of what’s around you – even if the journey winds through the more remote past of the 18th century of Mason & Dixon, Against the Day’s early 20th century, or Gravity’s Rainbow’s World War II setting. 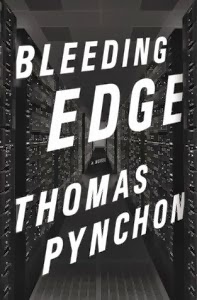 Bleeding Edge is set in Manhattan in the months leading to September, 2001, where Upper West Side resident Maxine Tarnow is managing two schoolkids, an ex-husband, and a fraud investigation business that’s no longer licensed – making her services all the more attractive to those who operate in realms where licensing doesn’t matter.

Thus she is hired to take a look at a computer security outfit named, in the style of the time, hashlingrz, run by the villainous Gabriel Ice, who may be involved in global money transfers involving a system called hawala, which I incorrectly thought Pynchon might have invented. Meanwhile, Maxine has mom duties to pursue, including the getting her kids to and from the tony Otto Kugelblitz School, which “occupies three adjoining brownstones between Amsterdam and Columbus” and “is named for an early psychoanalyst who was expelled from Freud’s inner circle.” Which I incorrectly thought was for real.

In fact, one of the challenges of this and any Pynchon novel is to figure out which of its narrative ingredients are actual, although the world he invariably creates picks up enough of a momentum that you just want to hang on for the ride.

The time and place are brilliantly captured, and because the premise is so technology intensive, we’re reminded just how far we’ve come since 2001. Video games are moving to the internet, but the hardware isn’t fast enough to keep up with the potential. Web geeks are arguing the merits of css versus tables.

But the real spine of the book is the classic hard-boiled detective story as imagined by Raymond Chandler and Ross MacDonald. Maxine’s investigation takes her from seedy warehouse spaces to elegant mansions, from her ex-husband, Horst Loeffler (who resembles Sterling Hayden), to a mysterious Special Case Officer named Nicholas Windust.

This being Pynchon, however, the others met along the way have names like Driscoll Padgett, Rocky Slagiatt, Reg Despard, Chazz Larday, Conkling Speedwell (an aroma specialist), Ian Longspoon, Lloyd Thrubwell, Spud Loiterman, and divorce lawyer Glick Mountainson. And there will be places like Joie de Beavre, which is a strip club in Queens where Maxine goes for a dancer’s-eye view of a suspect.

Pynchon’s prose is beautifully and lovingly crafted, its imagery deft and its puns and other gags laying in wait as a test of a reader’s cultural hipness. The better you know your classic films, the more of the jokes you’ll catch. There’s even a shout-out to Jussi Björling.

Computers and the Internet are at the heart of this tale, and Pynchon never seems more at home than when he’s dealing with the technical details of an entity. As Maxine’s old-lefty dad Ernie explains, the Internet


started back during the Cold War, when the think tanks were full of geniuses plotting nuclear scenarios. Attaché cases and horn-rims, every appearance of scholarly sanity, going in to work every day to imagine all the ways the world was going to end. Your Internet, back then the Defense Department called it DARPAnet, the real original purpose was to assure survival of US command and control after a nuclear exchange with the Soviets. ... the idea was to set up enough nodes so no matter what got knocked out, they could always reassemble some kind of network by connecting up what was left.

But the sense of paranoia that builds, besides being classic Pynchon, works all too well to set the stage of the September 11 attack on the city, the gravity of which is portrayed so startlingly well that the confusion invoked beforehand seems almost irrelevant. Not to mention:


After maybe a day and a half of stunned suspension, the usual ethnic toxicities, fierce as ever, have resumed. Hey, it’s New York. American flags appear everywhere. In apartment-building lobbies and up in apartment windows, on rooftops, in storefronts and corner groceries, in eateries, on delivery trucks and hot-dog stands, on motorcycles and bikes, on cabs driven by members of the Muslim faith, who between shifts are taking courses in Spanish as a Second Language with a view to posing as a slightly less disrespected minority, though whenever Latino people try putting our some variation like the Puerto Rican flag, they are reflexively cursed as enemies of America.

In Maxine, Pynchon has given us his most fully realized female character, even as he’s sent her to the usually male detective genre. She’s intelligent, sympathetic, dogged, and a great mother, and the conclusion – which wraps up very few of the book’s many mysteries, because they’re really not the point – is more warm and affecting, in its way, than anything in earlier Pynchon.

Which is to say it’s a terrific, compelling, hilarious, daunting, and surprisingly satisfying story. Pynchon is rumored to have been living on the Upper West Side for many years – I think he and New York are good for each other.