HOW DO YOU bring out the excitement that’s written into a piece of music without imposing artificial emotion? Musicians from Marlboro gave an exemplary lesson with their Nov. 15 concert at Union College. Each annual visit presents a different ensemble with a unique array of chamber works; this year the music of Thomas Adès nestled with works by Beethoven, Mendelssohn, and Fauré. 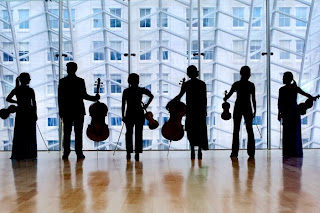 So much study is given to a piece of music during the Marlboro summer sessions – which includes work with seasoned professionals – that the young musicians gain an intense familiarity with what they’re performing, not to mention an approach to understanding works they take on outside of the Marlboro world.

Thus it was that the Beethoven trio that opened the program – his lighthearted “Kakadu” Variations, Op. 121a – was performed with the sense of humor the work demands. It’s reckoned to be a synthesis of work from the composer’s early years that was revised late in his life for publication. It opens with a introduction of such heightened solemnity that the transition to the “Kakadu” theme – a popular song borrowed from a contemporaneous opera – is all the more hilarious. But it needs no added interpretive artifice, for the humor is built into the piece.

As violinist Michelle Ross explained, Thomas Adès was a composer-in-residence at Marlboro a few years back, and the work that followed, his “Arcadiana” for string quartet, got five weeks of study. With violist Emily Deans rounding out the unit, they embarked on a seven-movement journey through water and woods replete with such expressive string effects as glissandi, pizzicato (including Bartók snaps), harmonics, muting the strings, and striking the strings with bow wood.

Adès’s musical language shows the influence of the somewhat disparate voices of Schoenberg and Richard Strauss, particularly the former’s “Verklärte Nacht.” But it proved to be a butt-shifter of a piece for the musically conservative audience. How do you enjoy a work like that? Surrender your expectations. Melody is only one of the tools being wielded here. Immerse yourself in the seeming foreign-ness of the sounds. You’ll find an emotional center developing, achieving a distinct identity in the middle movement, an unsettling tango, then revealing its melodic identity in the movements that followed, ending in a beautifully sculpted dying fall.

Finishing the half with Fauré’s Piano Trio was a shrewd juxtaposition. Here was melody, and plenty of it, but not shaped into the long lines that characterized the Beethoven or the Mendelssohn to follow. The drive of the piece came instead from the pulsing harmonies, Impressionistic in flavor, but foreshadowing more experimental works to come (although not, sadly, from Fauré himself, who wrote this in the last year of his life). I don’t think there’s a more gorgeous, emotionally elusive slow movement in the piano trio literature, and the final movement transforms Canio’s cry of pain in “Pagliacci” into a leaping three-note figure that seems to make peace with the world. And I strongly recommend you dig up Bertrand Tavernier’s 1984 movie “A Sunday in the Country” to enjoy the painterly way in which Tavernier uses that and other Fauré pieces to flesh out his gentle story.

Mendelssohn seemed most at home in the minor keys. The Violin Concerto and Hebrides Overture are two excellent examples; his piano trios are shameless in that pursuit. The Marborians finished the concert with his Quartet in E Minor, Op. 44 No. 2, which starts off with a throbbing, sinewy theme that also builds excitement with an ever-shifting harmonic underpinning. Again, the musicians added a minimum of “interpretation,” resisting the too-popular temptation to litter the piece with wanton rubato, and did full justice to the score simply by amplifying what’s there, giving depth to its emotional charges, which was as profound in the thoughtful slow movement as it was in the characteristically fleet scherzo.

This was chamber-music performance at its best, and a reassuring reminder that great things continue to happen at the legendary Marlboro music camp.
Posted by B. A. Nilsson at 2:49 PM