From the Vault Dept.: What the hell was I thinking with this lede? Even in 1986, when I was relatively fresh to the world of cranking out reviews, I could convince myself that dwelling on the appearance of the performers made some kind of sense. And what characterized this quartet’s identity so profoundly? Clearly, I was too busy lauding their wardrobe to say.

CENTRAL CASTING SHOULD HAVE the Pražák String Quartet available for Hollywood. The four musicians are accomplished players, who blend marvelously and who look the part. 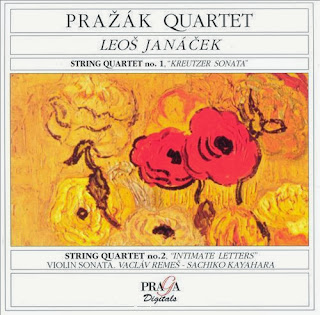 A concert at Union College’s Memorial Chapel Wednesday night proved that the group is good enough even to be a little eccentric, in the best sense of the word.

The quartet was founded in 1972 by students at the Prague Music Conservatory. The program – music of Mozart, Janáček, and Smetana – offered the ensemble the chance to present Czech pieces with a native accent. The interpretations took some unexpected turns but never without a felicitous result.

Should the identity of a piece of music compete with the identity of an artist? That question presupposes that a “pure” interpretation can exist, which is debatable. The Pražák Quartet has an identity as a performing group that informed everything they played and it worked. Like a fine singer, they have an identifiable voice.

This was apparent from the beginning of the opening piece, Mozart’s Quartet No. 21 In D, K. 575. There were tempo changes that sounded at first surprising but always were performed with consistent agreement among the players: this was the way they intended the music to sound.

Each player also projected an individual personality in appearance and playing style. They all look younger than their biographies suggest. Václav Remeš, the first violinist, had the steely-eyed look of a virtuoso. When excited he would rise off his chair; soulful passages he played from memory, his body turned towards the audience.

Second violinist Vlastimil Holek was the shy one, sitting in the back, studious, bespectacled. Cellist Josef Pražák looked the way he played: steady, like a rock. And violist Josef Klusoň was the humorist of the group, making the most of the wisecracks written into the Smetana String Quartet.

That piece, intended as an autobiographical portrait, prompted the most rambunctiousness from the players; in contrast was Janáček’s Quartet No. 1, an introspective work that was, in its way, the most compelling piece on the program. It was as if the composer himself were in the room, worrying at his desk, his gloom broken by intervals of lucid harmony.

The small audience – a lucky audience! – prompted two encores of quartet movements by Haydn and Dvořák.

At intermission, the audience also shared their great annoyance at the vigilance of the Union College Security Officers in keeping cars off the campus. Better parking might help improve attendance.

The next concert in the series – 7 p.m. Sunday, March 16 – will be a performance by the Musicians of Swanne Alley, a sextet that plays music of Shakespearian England.