Bird or Beast Dept.: Even as the T-day prep in my house begins to crank into what will become a frenzy by Wednesday, let's consider the alternatives.

WHILE IT’S TRUE THAT my family roasts a turkey on a day other than Thanksgiving, that’s only because we take advantage of holiday-season sales to scoop up a couple of frozen birds for our own freezer, and use it much later for a meal that we view as ironic, parodying the Norman Rockwell image of a turkey dinner by reproducing it perfectly. In July. 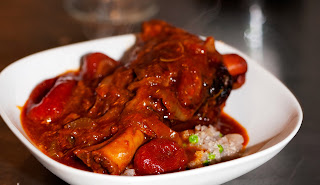 This isn’t the turkey we use at Thanksgiving. That one has to be a costly, hand-raised, antibiotic-free bird, served with a gravy of liberal hypocrisy. Our guests won’t accept a mere Butterball for the holiday (but nobody inquires in July). Frankly, it’s getting expensive.

And it’s intrinsically problematic. You can’t cook it to everyone’s satisfaction. Roasting it requires a fancy timing dance so that the dark meat cooks through without destroying the white meat. My wife’s family’s tradition was to blast the whole bird to a state so dry that it required an ice pick, not a knife. We’ve done the dance of cooking it to breast-meat doneness, then returning the legs only to the oven, but that’s too much work, especially on a day I also dedicate to drinking.

We have subjected it to other, more successful cooking methods. Smoked turkey is excellent, providing the best leftover meat as well as a carcass that produces a unique soup stock. It requires an outdoor smoker, however, which isn’t always a joy to operate in late November. And we have guests who aren’t crazy about the flavor.

Deep frying it means it cooks evenly and quickly: you can finish a 16-pound bird in under an hour. The result is tasty as can be and has a crisp skin that’s more fun to nibble on than pork rinds. But deep frying is another outdoor process with some danger attached. Start with too much oil and you get an unpleasant surprise as you lower the dinner into it. And, no matter how scrupulous you are about containing it, it makes a mess of your yard. This method too has its opponents, who wrongly believe that the meat is sucking up all that oil.

For the last couple of years I’ve prepared the holiday turkey by removing its skin while keeping that skin in one piece, taking off the breast meat as another single piece, butterflying the breast and stuffing it with a sausage made from the dark meat, jelly-rolling it back in its skin, tying it up and roasting it. It’s worth the prep trouble: it cooks relatively quickly, is evenly done through and through and still has the skin component for that added crunch.

Because I’ll never top that preparation—and I’m in constant competition with my own cooking—this year I’m abandoning turkey as the Thanksgiving centerpiece. It won’t go away completely: I’ll be making, for the main course, a variation of the classic Italian timpano (see the movie Big Night for a glorious example), stuffed with homemade tortellini and turkey meatballs, with a ragu developed from pork, turkey, chicken livers and sage.

Suppose you want to buck the turkey tradition completely: What else can you offer your guests?

For a slightly exotic meat, try lamb. (If it seems silly to call it exotic, try finding it in the supermarkets near where I live, in Montgomery County.) If you avoid the expensive rib chops, lamb lends itself to preparations that will perfume your house more compellingly than that old bird ever did.

Leg of lamb lends itself to marinades and stuffing. You can marinate it in wine, yogurt, citrus—anything with some tasty acids to purvey. Then you can fire up the grill and finish it with an attractive crispy coating.

If you’re roasting it, what’s required is the addition of rosemary and garlic. Apply the latter by piercing the leg at regular intervals and inserting a sliver of the garlic clove.

Stuff it with spinach and feta for a Greek approach; go Moroccan with apricots and olives and preserved lemon. Keeping it ovine, I’ve stuffed it with merguez, the spicy North African lamb sausage.

My favorite part of the beast is the shank, a once-neglected morsel that’s gotten steadily more expensive, but still is worth the price. Brown it, slather it with tomato paste, then braise it in a mixture of red wine and chopped tomatoes enhanced with celery, carrots and onions. It needs a few oven hours. Don’t forget to enjoy the marrow.

Beef short ribs also lend themselves to braising, and they make a worthy alternative if you can’t find lamb. Braised anything is usually excellent, because the lengthy cooking time brings out flavor as it tenderizes.

When’s the last time you enjoyed a crown roast of pork? Enough said.

I‘ve offered seafood to my guests over the years, but it tends not to invite the encomia of the land-based comestibles. One exception was a preparation of salmon en croute, a long filet coated with a mushroom purée before being wrapped and baked in dough. The fact that it was served with Hollandaise ensured its appeal.

I canvassed some friends about their holiday traditions, and discovered that the majority accedes to a turkey-centric family gathering because that’s the way it’s always done. Any mixed feelings about the bird and its preparation were offset by the opportunity to spend time with people they like, or at least to escape to the TV set.

Those who are perennial guests saw no opportunity to change the menu; those in charge were nervous about offending the others, particularly the oldsters for whom (they believe) tradition is a necessity.

But one friend offered an interesting alternative strategy. “We never do turkey,” he says. “We have lasagna every year, and it’s terrific.”