BY 1972, I’D APPEARED in a few high-school produced plays and a musical (“The Pajama Game”) the summer before – that last most notable because it won me my first full-on, French-seasoned kiss from a female castmate, the taste of whose chain-smoking I was prepared to ignore because of the thrilling novelty of the experience.

This summer’s show, “How to Succeed in Business without Really Trying,” brought together much of the same cast, without, alas, my fickle osculatory friend. And I was given the dual role of head-of-the-mailroom Twimble and chairman-of-the-board Womper, and it’s in the latter role that you see me pictured. As a 16-year-old, my hair was greyed and my belly padded. Forty years later, neither adjustment is required.

Michael Connolly, an actor ten years my senior who had achieved much acclaim in our hometown of Ridgefield, Conn., was doing a lot of regional theater and singing with Light Opera of Manhattan, a Gilbert-and-Sullivan-centric group. He would make his Broadway debut in 1977, and is pictured backstage there here.

Mike and I shared a passion for patter songs, British comedy, and opera. He watched some of the “How to Succeed” rehearsals and gave me some shameless suggestions that I even more shamelessly followed.

He was a wellspring of the kind of acting techniques Meisner and Strasberg never taught, although these techniques were more of a prop-dependent nature. He’d already shown me how to discourage a scene-stealing actor when I appeared in a community-theater production of “Harvey.” Being the youngest, I played the oldest: Judge Gaffney. Our Elwood P. Dowd, a star of the local community-theater world, tended to obscure me in the scenes we shared, and developed an irritating business of clapping me, hard, on the shoulder of my swallowtail coat.

Michael suggested I dust the coat’s shoulders with flour. It was perfect: came the Elwood clap and a cloud of seeming dust erupted to great audience laughter. The guy never touched me again.

For Womper, he suggested a floppy shoe. This is achieved by removing the coarse thread holding sole to upper on a good pair of brogans. It’s not readily apparent, but it causes a secondary sound to issue when you’re walking: fap-whap, fap-whap. And so I gave Womper floppy shoes. 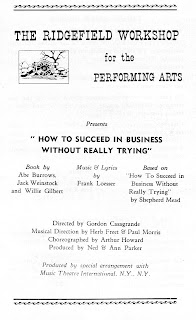 I can’t recall if it was Mike or I who thought of the walking stick you see me holding (discovered in a junk shop, and which against all odds I still own), but he told me of a vaudevillian’s trick of gaffing the tip so that it would stay upright on stage when released, thus drawing audience focus.

I didn’t dare try it in rehearsal, so opening night gave me the chance to test my gaff. I picked a moment shortly before the start of the song “Brotherhood of Man,” when Womper is berating the assembled workers. I found what seemed to be the balance point and released the stick’s handle, and it obligingly remained upright . . . for only a second. Then it began to wobble, the head describing an ever-increasing spiral before it slapped to the floor.

The cast played it as if we’d been doing it this way for weeks. The various workers lunged to retrieve it, but Bill Mercurio, as the toadying Bud Frump, made sure he was first to get to it and return it to me.

It got a good laugh, but director Gordon Casagrande correctly observed that it was clearly a gratuitous piece of business and slowed the moment’s pace too much. (These days I dearly wish there were more directors with such insight.)

Those summer shows were intended to give the town’s teens a worthy warm-weather project, which worked for me. Along with the theater craft such an experience imparts, I learned not to feel self-conscious about my singing voice. I learned that young women in skimpy costumes are still human and might actually speak to you. And I learned the pleasure (scene-stealing forays aside) of becoming part of an ensemble working together to make a show work. And all these years later, I still know all the songs.
Posted by B. A. Nilsson at 11:43 AM