Jack's: A Tradition of Enthusiasm

From the Vault Dept.: I began reviewing restaurants in early 1986 for Albany’s Metroland Magazine. The story of my first review – and the review itself – you’ll find here. After five months, it became clear to publisher Peter Iselin that the page attracted restaurant advertisers, but the advertisers feared the “announced visit” policy wasn’t being taken seriously enough. We joined the rest of the food-review world with unannounced visits in September. Here’s my account of the first of those visits. 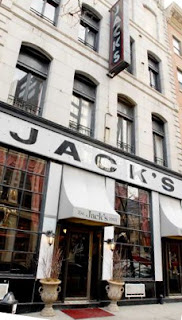 OUR GREETING AT THE DOOR was so enthusiastic that I figured something had gone wrong – that this, my first unannounced Metroland visit, had been leaked. But an eager hello is the norm at Jack’s.

It was a crowded Wednesday night and we were seated in the midst of the large dining room, facing front. “The floor show is better from here,” our host suggested humorously. And it was: we watched the mad crisscross of waiters as the tables were taken through their courses.

Jack’s has been an Albany institution for 73 years, as a sign by the door indicates, and my wife summed it up nicely: “This is the best you can get from a place this old. I’d expect something different if it had opened within the last couple of years, but this is an old-style place. They serve an iceberg salad. But it’s the best iceberg salad I’ve had.”

The multipage menu also reflects the old traditions, the pages decorated with antiquated line drawings. But the selections themselves are well-described, basic items that Jack’s has served up successfully for all those years.

A page of daily specials is added to the menu. I’m always receptive to the chefs suggestions, so Susan and I fashioned our orders from that page for the most part, even choosing our wine from a “May We Recommend ... ” box. It was an Italian red, a nonvintage Corvo that was dry and robust, well worth the $11.

The waiters are tuxedoed and aproned, another classic tradition, and once the host finds you a table, the server becomes your link to the kitchen. This can be a weak link, of course – one of the liabilities of the “sectional” style of service. Our taciturn waiter, Michael, had the innate waiter’s sense that keeps the food coming at just the right moments.

From the generous supply of appetizers, I chose the traditional escargot. And that’s what I got: traditional escargot ($4.95), served in shells with a little lake of garlicked butter redolent of herbs. I am still troubled by the suspicion that those little snails are overrated – I’ve never had any but the canned Roland brand that most kitchens use – and thus serve really as a vehicle for all that butter, which I made good use of by anointing the tray of rolls that comes with dinner.

Susan got the famous Manhattan clam chowder ($1.50), in which the tomatoes are very discreetly mixed with large chunks of potatoes and peppers amid the smooth, creamy base. Although they must certainly turn it out by the potfuls, Jack’s kitchen keeps the standard high (and, I’m told, consistent).

Salads arrived promptly. It’s nice to see the preceding course removed before the next arrives. I dislike those traffic jams that occur when plates pile up.

From the seven special entrees, Susan chose the baked stuffed flounder ($13.95), prepared with a modified duxelle in which the chopped mushrooms are seasoned with shallots and chives and mixed with a sauté of shrimp and crabmeat. My broiled swordfish ($13.95), was one of the best I’ve ever had, the outside a flaky shell and the inside as creamy as candy.

The success of the fish was due in large part to its absolute freshness; there is a little odor that unmistakably tells its story. (An absence of odor indicates frozen fish.)

Accompaniment to the entrees was a garnish of peas and red peppers and au gratin potatoes, a coarse mash seasoned with parmesan and nutmeg. Presentation was attractive, on a pewter, fish-shaped platter.

We finished off with cheesecake (Susan) and terrific chocolate mousse (me). These were difficult to finish, but I managed to do so.

Co-owner Arnold Rosenstein credits the success of the food to chef Carlos Trichilio, who has supervised the kitchen for about a quarter-century. From his semicircular counter by the door, Rosenstein keeps an eye on the large room and the sometimes frenzied action. But it’s a comfortable room: there were many single customers in view that Wednesday, the mark of a comfortable place.

The food is great and you can count on that from visit to visit. Atmosphere and service are very good, with minor qualifications. There is a lot of bustle in the dining room, and it feels busy. And it’s largely due to the section-to-section service, which might be improved by a captain-waiter system.

But Jack’s is and has been an institution, and based on this visit, should continue to be so for many, many years.

The restaurant continues to thrive under the ownership of Arnold Rosenstein’s son, Brad, and currently helming the kitchen is renowned executive chef Larry Schepici. You’ll find updated menus and other information on the restaurant’s website.