Across the U.S.A., Lighting the Sky Dept.: Twenty-three years ago, my wife and I took a cross-country drive during which I filed a couple of dozen Ernie Pyle-inspired dispatches that ran in the Schenectady Gazette. This one bears the dateline of LaFollette, Tennessee, and was written Sept. 27, 1989. 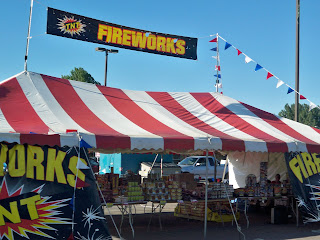 THIS IS ONE OF seven states that allows Class C fireworks to be sold. Ever since we crossed the state line we've been besieged by yellow billboards exhorting us to stock up on explosives, and although I have no intelligent use for the things I'm fascinated to see up close what's been legally forbidden in every state where I've ever lived.

Bimbo's Fireworks, Hillbilly Bob's or just plain Fireworks read some of the signs. We're at Thunder Mountain Fireworks, just off Interstate 75, and owner Landsen Hill credits the highway with his business.

“We sure couldn't survive if we just depended on locals,” he says. “Nobody here could. But we know a lot of tourists who plan their vacations so they come through Tennessee, pick up their fireworks, then take 'em back to a state where they're illegal and shoot 'em off in the back yard.”

The Federal Department of Transportation established safety standards for fireworks, and Class C, which is intended for home use, must meet particular guidelines for packaging, labelling (including warnings) and fuse construction, among other requirements.

What you see at Fourth of July shows are Class B fireworks, which Hill also deals in for his Pyro Shows business — full-scale, professional displays with synchronized music. “That's real popular now,” he says. “You have know exactly when a rocket is going to go off and time it to the music accordingly. When it all works, it's spectacular.”

Right now he's waiting for a truck to come back with some supplies from Bob LaPietro, a manufacturer in Delanson, NY. “I've got a spot during Aretha Franklin's 'Respect,'” he says, “and I need some big mags — magnesium rockets — for it.”

You'd swear some of the Class C stuff he has on display must approach the intensity of
the professional ones. There are rocket launchers that are six inches wide and a couple of feet tall, and explosives ranging from big red missiles to tiny firecrackers and smoke bombs.

We got another tour of the artillery down the road in Lenoir City, at a roadside stand. “Jack Daniels and fireworks. That's what Tennessee is all about,” says Mike Everett, a young man with sandy hair and a face more trustworthy than a nun's. He hurried over from a nearby gas station when I walked into the tent, one of four such tents at this intersection alone.

Are tourists the biggest customers? “Oh, sure,” says Mike. “'Specially Canadians. They buy 'em on their way down to Florida, then they get some more on their way back. I hear they sell 'em up in Canada and make good money off 'em. Like this pack of bottle rockets.” He picks up a bundle of twelve packs of twelve rockets each. “We sell this for $2.95. They go home and break it up and probably sell each twelve-pack for a buck.”

When buying fireworks your main considerations are whether you want noise or color. As Mike describes it, some of the items give you pretty colors, some of them fly into the air and give you colors. He is matter-of-fact in his portrayal of them. “This one,” he says, holding a tissue-wrapped sphere slightly larger than a ping-pong ball, “you light the fuse and drop it in here.” Which is a tall cylinder on a wide plastic foot. “Then it shoots straight up and boom! Gives you all kind of colors.”

There is a strange nationalism about the fireworks. Most of the items are made in China and bear bilingual labels, which is only appropriate. China is the country that originated these eruptive displays. Packaged collections, however, are strictly southern. For $15 you can buy The Rebel; twice that amount gets you Johnny Reb. Both bear Confederate States military motifs.

“We have to buy the Class C stuff from China,” says Hill. “For the price the consumer wants to pay you just couldn't afford American stuff.”

But there are some American-made products, Mike says. “There's a big factory up in Kentucky where a lot of people say you can get stuff cheaper 'cause you're right at the outlet. Never been there myself.” He shrugs. “Don't see how they can get much cheaper than here.”

You’ll find your run-of-the-mill stuff like sparklers and firecrackers here, but each has an enhancement. “These are some sparklers that change color as they burn down,” says Mike, showing a package adorned with a drawing of a large rod rising out of a cluster of barrels marked TNT. “And here are some M-100 firecrackers. They really make a noise.”

If color is your preference, then the World of Color assortment may be the thing, giving you surface and aerial displays. The Rocket Collection is for a junior Fourth of July show.

The tables are piled high, and there are several rows in this narrow tent. No Smoking signs are everywhere, but not always obeyed. “Oh, it's amazing what some people will do,” Mike says with disgust. “I mean, they come walkin' on in here with a cigarette hangin' out of their mouth like they think they're gonna get away with something. Get away with what? I mean, one thing goes off in here and boom! the whole place goes up. I sure don't want to be here for that.”

He pauses and considers the scene. “'Course, it'd look pretty neat if it happened at night.”


Sequel to the Story: . . . and that's just what happened to Thunder Mountain Fireworks on Memorial Day, 2011. Six fire departments were called to the scene at about 2:30 AM as the building went up in flames and rockets.

"When we got there, flames were shooting through the roof," said Caryville fire chief Eddie Hatmaker. "Fireworks were shooting everywhere." He was quoted in the Knoxville News Sentinel, which also reported that owner Lansden E. Hill Jr., complained that the 6,000-square-foot building's sprinkler system wasn't working reliably. "It was scheduled to be repaired soon," Hill said. "It's very frustrating."