Copter over the Edge

Across the U.S.A. Dept.: In Sept. 1989, my wife and I drove a VW camper from New York to California and back. Along the way I wrote a couple of dozen pieces about the trip that ran in the Schenectady Gazette. Here’s an account of a memorable stop in Arizona.

“BUT YOU HATE to fly. Why do you want to do this?” 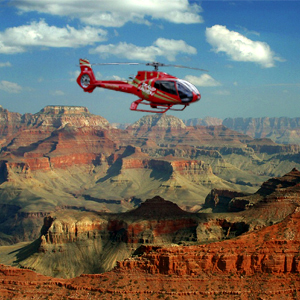 A fair enough question. I was trying to persuade my wife that a helicopter ride over the Grand Canyon was the only way to see it. I had been lured by a billboard—take note, you who deface our highways with those things—and a visit to the Grand Canyon Helicopter booth at the local airport provided information on fares and departure times.

But Susan wanted to see the canyon from its edge, resisting my argument that it would be more dramatic for first-time visitors to scoot over the rim of it in mid-air.

Our swing through the west brought us to more national parks and monuments than we'd even known existed, which may be a provincial-mindedness characteristic of the northeast. We're very urban-minded, even we who live in rural areas, because the cities here are sprawling and never too distant.

Whereas South Dakota, a state onto which you could plop all of New York and still see an enormous amount of prarie, has a capital city that New Yorkers would view as a somewhat largish town.

True, we have the Adirondack Park, a place where you can comfortably lose yourself in a beautiful, back-to-nature setting (Lake George Village notwithstanding), but that kind of setting is the norm in Arizona. Substitute desert for greenery, but you’ll also discover that the Arizona desert has a hypnotic charm.

This canyon, however, is a piece of gorgeous destruction. We fought traffic into the park and then fought camera- and camcorder-laden tourists for a view from the edge—and were astonished. It's as if an immense, ugly plow carved a jagged mile-high furrow. The layers of many-colored rock and sediment on the cliffside gives it a special luster.

It's beautiful and somehow dangerously violent. For entertainment value, it's Arizona's equivalent of Manhattan.

Grand Canyon Helicopters has been taking tourists over the pit for 25 years, offering a variety of tours. The briefest—a half-hour jog straight across and back—was all we could afford. It proved to be a good choice.

You could be booking a flight to Chicago what with the computer terminals and such in the office by the heliport. We'd picked a warm, clear, slightly breezy day for it. Good photo opportunities. We slung ourselves with cameras and moved to the waiting area.

I wasn't worried. Twenty-five years. A wall covered with safety award plaques. And they make you watch a videotape that covers a lot of safety instruction before you leave. They even made us watch it in French.

It's natural that they should arrange the passengers—five of us—by weight, but the seats are assigned while the copter is noisily starting up, so you're told where to go in stern sign language, like a prisoner.

Which was the feeling that suddenly overcame me as the I wriggled into my seat and the door was slammed shut. We put on our headphones. The pilot, whose name was Gordon, introduced himself and welcomed us. And switched on some vapid tinkly background music. I turned the sound way down.

It's like flying in an oversized tire swing. You twist and swoop and dart around like the big bug the helicopter resembles. The port is a few miles south of the canyon, so you ride over acres of pine trees during the approach. Away down below is the reassuring shadow of the whirlybird. And then —

Oh, no. Not Also Sprach Zarathustra. The world's most overused anthem. Timed so that the climactic moment coincides with your first view of the big pit.

Still . . . it is a magnificent, humbling sight, that canyon. My terror really began when that helicopter shadow plunged a mile below, out of sight somewhere amidst the brown water of the Colorado River. At the same moment a crazy gust of wind shot up out of that crevice, slapping the little helicopter into a jerky dance.

Susan and I looked at one another. Her color was fading. I saw her turn up the volume on her headphones. Even before Gordon resumed speaking.

He shared with us interesting facts about the Canyon, describing the age of the formations, the natural process that caused it so many eons ago, the variety of geologic material in evidence, and so on. I took notes, or tried to, but there's nothing legible on the pages. I did find myself hunkering over the pad as an excuse to keep from looking out the door.

With the words of the safety video coming back to me: “If your door should accidentally come open, just close it again.” Right. I cinched my seatbelt tighter.

“These large rock formations are called temples,” said Gordon. “And, as you might expect, each temple has been named. Coming up on our left is the Dragon, and I think you can see where its tail is and where its claws are, and now we see the head. Everyone okay back there? Good. Coming up on our right . . . ”

No. Everyone was not all right. The copter danced like water on a hot skillet and I could see only that fatal moment when we stopped moving forward and began falling. Way down. Suppose I tapped Gordon on the shoulder. I'm sure he'd be sympathetic. “Listen,” I'd say, or shout, more likely, “I know you've been doing this for years and are no doubt the most accomplished pilot on the staff. While I have never been in helicopter before in my life. But I wanted to point out to you that there's simply too much turbulence going on here, and we're certain to die very soon. Could we go home now please?”

I tried to calm myself. I listened to the dumb music. I even turned up the volume, understanding now why I'd seen Susan do so earlier. I didn't just listen to the music: I crawled into it. I wrapped it around me. It suddenly sounded better than anything I'd ever heard in my life, and we're talking about Christopher Cross and that sappy song "Sailing."

If I'm not going to survive, I decided, I'll take a lot of pictures so people can see how I went. (There's a grim footnote to this story: a tour plane crashed near the Canyon a week after our visit. The final moments were being reconstructed from, among other things, a camcorder that was found in the wreckage. A pilot I later spoke with told me that a helicopter is the safest air transportation in turbulence. Light planes are more subject to weather vagaries.)

There's a lot of sky around you in a whirlybird, just a plexiglass sheath away. And away down below I studied with a dead man's calm the temples and crags of the canyon, ringed with colors so bright that they look as if they were just painted on.

Exhilaration comes as much out of fear as of excitement, so I can't deny that I settled in to enjoy myself. Once I decided that there was nothing much I could do about it I decided to have a good time.

We continued our journey with a slow about-face to take us back to the south rim of the canyon. Tiny bright-colored specks of people inched up and down the face, using paths or ropes or overburdened mules. They seemed much more vulnerable than we were—there's no plexiglass around a mule, and I fell victim to a little sense of aerial superiority.

By the time those pine trees returned and the helicopter's shadow was tucked firmly beneath us, I was a little disappointed. “Don't ever ask me to do anything like that again,” Susan declared as we eased our bus over terra firma, back toward Williams. “Weren't you petrified?”