Date with the Blues

Blue Man Group originally appeared at Proctors in its infancy in 1990 as part of the Proctors Too series of experimental shows. Since then, they've become an institution, with their own theaters and several tours. Following a successful Proctors performance last year, they'll be back this weekend for three shows (8 PM Sat., July21, and 1 PM and 5 PM Sun., July 22). Here's what I wrote about last year's performance. 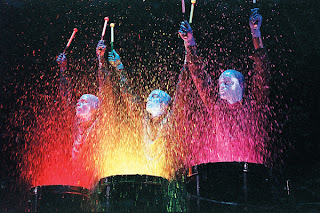 AT THE HEART OF IT are three bald men of similar size and shape, clad in boots and black jumpers, their heads and hands a deep, shiny blue. Their faces are impassive. All expression is conveyed by head tilts and body angles, with only the occasional flash of a pair of startling eyes. They are human machines, assimilates of a society that demands uniformity.

They begin, as all humans begin expressing themselves, by drumming—but this is drumming with deafening noise and searing light and, at the height of the conflagration, colorful sprays of paint dancing on the drumheads.

In the most engaging sequence, titled “Feast,” the funniest of the many bits we saw, they coaxed a reluctant young woman out of the audience and onto the stage and seated her with them, four abreast, at a dinner table, in a routine that required her to choose actions based on a succession of often bewildering objects the Blue Men presented. These included candles, flowers, Jell-o, Christina’s World (victim of a completely unexpected and hilarious gag), and an outsized box of Twinkies.

The routine climaxed with such a wonderfully disgusting approach to Twinkie consumption that I’d like to think it would discourage such activity in anyone who witnessed it. But I know better than to hope for that.

Social commentary lurks behind many of Blue Man’s segments, particularly a routine about cell phones, e-readers and multitasking that fed us simultaneous texts on three large video screens. Deft as the jokesmanship was, however, the bit completely lacked the kineticism that informs the rest of the show and thus fell flat, which is a shame; I enjoyed the commentary.

The pre-show curtain displays a quote, fancifully attributed to International Diplomacy for Dummies, that begins, “When you first meet people from a foreign culture, a great way to break the ice is to offer a few gifts as a gesture of friendship.” Thus, towards the show’s beginning, the Blue Men acrobatically tossed marshmallows and paint-filled gumballs, which were used to decorate canvases that audience members received.

“But ultimately,” the quote continues, “the very best way to forge a lasting friendship is to create something together: Whether it’s a meal, an art project or just a spontaneous dance party, when you create something with others, you build a connection that lasts a lifetime.”

Thus the “Feast,” and thus “Klein Painting,” in which an audience member is jump-suited and helmeted to serve as the human brush for a pop-art piece. (My daughter suggests that the trumped-up video sequence showing us the artwork’s creation would gain a few more seconds of credibility were the words “Live Backstage” displayed at its start.)

And, climatically, “Money Maker,” exhorting us onto our feet and shaking our butts to more of the rhythm-heavy music that saturated the evening. Our dance party segued to “Zygote Finale,” in which an array of gigantic lighted balloon balls are first drummed upon and then sent over the heads and hands of the audience, soon joined by streamers of multiple variety—a technique also used engagingly in the Broadway circus-arts performance “Slava’s Snowshow.”

Along the way were sendups of Lady Gaga and Beethoven’s Für Elise, a video-based twist on the mirror sequence used in Duck Soup and other films, and a dancing-puppet trip to Dimension 2.5. All of it emerging from and returning to our DNA, as the colorful polymer strands that opened and closed the show suggested.