Back in the Day-O

“Put on something I haven’t heard before,” my daughter often says when we’re considering music to listen to at home. I picked out a Bear Family set of Harry Belafonte’s first recordings, including the sessions that became his multi-million selling album “Calypso.” I told her what I knew of the singer’s history, which is a breathtakingly impressive record of leadership and financial support of the struggles for civil rights. At age 85, he's still active, and his autobiography, My Song, came out late last year. “And when I talked to him,” I began, and she smacked her forehead. Seems I’ve spoken with a lot of people during the years I spent interviewing them for newspaper pieces. I knew comparatively little about Belafonte when I spoke with him in advance of a performance in the Albany area in 1986, but, as it happened, he was happy to do most of the talking. 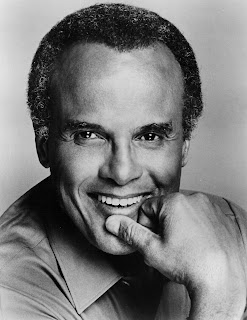 WITH SO MANY PROJECTS in the works, why is Harry Belafonte adding a concert tour to his schedule? “I don't want this to get out,” he says in a deep drawl, “but I woke up this morning and discovered I had to pay the rent.”

The actor/singer/producer/entrepreneur will perform at the Coliseum Theatre at 8:30 p.m. Thursday with seven musicians, four back-up singers and a program that he describes as “a sample of new and old. People will be familiar with many of the songs, the traditional ones that I'm known for, but there will also be many new songs, songs of different cultures with global insight.”

Global insight is a phrase important to Belafonte. He was the major force behind the United Support of Artists for Africa project and continues his activism with work on a forthcoming mini-series.

'It's a motion picture titled ‘The Mandelas, a South African Story.’ It is being produced for ABC to air at the end of 1987. Right now we’re in the midst of preparing the script and scouting locations and artists. Sydney Pollack is co-producing it with me and we already have Sidney Poitier and Jane Fonda lined up for the cast.”

Belafonte explains that he has been heavily influenced by his African experiences. The recent “We Are the World” fund raiser “was very exciting. Very meaningful. I was deeply moved by the way in which it all took off, the way the arts community came together and people responded.

“Some are complaining now that the money isn’t being spent fast enough but I say we can spend it fast or we can spend it right and we’re choosing the latter. We just a built a bridge in Chad where a faulty one was washed away. We are able to shop for the goods we need globally, bringing us the best prices. We have special funds set aside for emergencies, like sudden outbreaks of disease, and we have just gone into the businesses of well-digging and reforestation.”

Belafonte’s identity as a black activist was first shaped by his frustration as an aspiring actor. “When I came out of school it was especially difficult for blacks. Today you have television, movies, recordings, theater – it’s not at all the same. There was absolutely no TV for blacks back then, very little theater and nothing in movies except for the most subservient roles.

“So I either had to find a new profession or discover a route that would be artistically satisfying. And music became a catalyst. When I began singing folk songs I discovered that the folk art allowed me to say and do an awful lot because of the range of the music.

“As a folksinger I could be anyone I wanted to on stage. In one night I could be Spanish, Irish, Jewish – anything I wanted. And with that humble and complicated beginning I was quite prepared to stay in that area but my career took off completely unexpectedly.

“That success opened a lot of doors for me, and through me for many others. I was the first black producer working in television, and had the first integrated show – ‘Belafonte and Company,’ on the Revlon Hour.

“I was in the movie ‘Carmen Jones,’ the first successful black-oriented picture in the history of the business, and I went on to deal with racial issues in ‘Island in the Sun’ and a nuclear holocaust in ‘The World, the Flesh, and the Devil.’

“And, with the Jamaican music that I helped to make popular, a new era of looking at Third World music was ushered in.”

He speaks highly of the musicians he currently tours with. “When they get through with me, I know I’ve been through a workout. Each member of the group performs with dignity and excellence.”

Comedienne Maureen Murphy will open for Belafonte; all seats are $16.