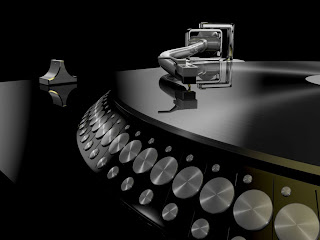 O, YE CHILDREN OF iPads and shuffle play. My early acquisition of music was comparatively more labored – yet at the time it was the only way I knew. When the mysteries of classical music began to reveal themselves to me, I was in my early ’teens and at about the halfway point in the long-playing record’s forty-year run.

Classical radio was terrific for discovering pieces of music, but it wasn’t much help for collecting them. It tended to be unpredictable, although a long-defunct magazine called FM Guide offered some help. In the pre-cassette days, sometimes I was able to borrow a friend’s hefty Wollensak tape recorder and capture a piece or two. But the physical aspect of the record stoked the joy of ownership.

I won’t argue the merits of LP versus CD audio quality. I willingly shifted to the latter to enjoy scratch-free listening. I was a dab hand at marring my records. Although it often seemed as if merely exposing the pristine grooves to air caused at least one scratch to appear, my tendency to needle-drop also took its toll.

Because early in those discovery years I’d become fascinated with particular musical moments. A record player let you easily replay those bits in a ritual that had its own appeal, a ritual much more elegant than jockeying a cassette tape back and forth. I’d eyeball the start and end locations on the platter, then carefully lift the tonearm and, sighting along the grooves, drop it (ease it, actually) back at the start of the passage. Thus wallowing in one of music’s magical (to me) moments while further destroying the vinyl.

The first of those musical moments I discovered was in the last movement of Schubert’s Ninth. It was more of a cumulative moment, pretty music requiring a repeat of the movement’s entirety, but the compelling effect is the bouncy, Italianesque second theme, a theme that begins with four half-note Cs over what’s technically described as a “tum-diggety-tum” figure.

Schubert also contributed my first chamber-music obsession, one I share with many: the second theme of the first movement of his Quintet in C Major, a theme that has a sinewy, close-harmony thrill, the kind of thing the Everly Brothers might have come up with were they gigging in 1828.

It takes a little while to get to the moment in Mozart’s Symphony No. 38, nicknamed the “Prague,” but it occurs for me as the stately introduction gives way to a quiet, somewhat off-kilter theme that soon turns into something delightfully arpeggiated. It’s a series of felicitous transitions that still makes me smile.

Speaking of Prague, I fell instantly in love one day with a waltz by Dvořák, his op. 54 no. 4 in D-flat major, originally written for piano. I heard a version for string quartet on the radio one afternoon, and tracked down its LP source: a long-vanished chamber music set on the Vox label.

One of the briefer moments that grabbed me was the crazy finish to the harpsichord cadenza in Bach’s Brandenburg Concerto No. 5, which heralds a satisfying re-entrance of the orchestra. And the payoff to the second theme of the last movement of Chopin’s Piano Concerto No. 2, which starts with a martial figure characterized by triplets and pays off with a wistful effect using an interval of a fourth to amazing effect.

More languorous such moments penetrated my teenaged brain’s impatience. Vaughan Williams’s “Fantasia on Theme of Thomas Tallis” has an echo effect and modulation that can take your breath away, while the slow movement of Bruch’s Violin Concerto No. 1 gives the soloist a final statement of the theme that’ll bring tears to your eyes.

My plate of musical favorites has grown immensely crowded these days. Fortunately, I’m too lazy now to try to reset the playback of anything. I also find myself luxuriating in the silence between pieces, spacing a once-crowded playlist.

But I’ll offer two more of those moments that caught me early on, both by Beethoven. First, the development section of the first movement of the “Archduke” trio, which calls for the violin and cello to indulge in jazzy pizzicato against the piano’s trills (and don’t forget that Beethoven invented ragtime in one of the variations in his last piano sonata). Second, the moment in the finale of his Symphony No. 7 when the violins get stuck trading a seven-note motif while the winds and brass play a series of long-note harmonies that rise, step by scale-based step, to a climactic return to the main theme. It’s so inspiring that pianist Oscar Levant claims to have gotten excused from a speeding ticket by telling the judge that he was listening to this piece on the radio.