Dinner in the Dells

Across the U.S.A. Dept.: Much of the appeal of writing, for me, is surprising myself with felicitous turns of phrase. Sometimes I borrow from others, and I was amused to see the Gilbert & Sullivan snitch in this piece. By request, another installment of the series I wrote in 1989 and which ran in the Schenectady Gazette as my wife and I drove cross-country in a VW camper to embrace the hippiehood we’d missed in the appropriate decade. That the request came from this selfsame wife still counts, doesn’t it? Turns out, by the way, that Paul Bunyan's is still in business with the same menu (the photos come from the eatery's website). 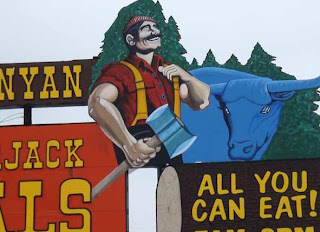 WHEN A WAITRESS BUBBLES with wit and good humor at dinnertime on Labor Day in a busy tourist-town restaurant, she’s probably able to withstand anything.

But, “The season’s almost over,” Roxanne tells us, “and I can’t say I’m unhappy about it.”

She’s hustling grub at Paul Bunyan’s, a loghouse cafeteria and gift emporium on Route 13 in Wisconsin Dells, a tourist resort about four hours west of Milwaukee. “Wisconsin Dells is kind of a joke in the state,” a Milwaukee friend warned us. “It’s a place they should have left alone.”

Now it has all the trappings of Lake George and Ocean City, which always seem to include a theme amusement park, miniature golf and a bad wax museum. And restaurants galore. We chose Bunyan’s because it advertised itself as an inexpensive all-you-can-eat place, and we were feeling broke and hungry. That must be the state of most tourists, because when you’re in that condition those flashing lights and over-written signs look mighty attractive.

The Dells, tourist crap and all, gave us the first taste of the politeness that would characterize all of our contact with people throughout the west. At Paul Bunyan’s it was five minutes to closing time, which in New York means you stay on the street. But here we are graciously shown to a table and Roxanne bounds forth to introduce herself. She wears a checkered shirt and denim skirt and a red bandanna, an outrageously silly attire that nevertheless goes perfectly with the long tables set with an oversized tin plate and blue enamel coffee cup at each place.

“You don’t need a menu. I’ll bring it all out for you. You got ribs, and they’re pretty good, and there’s fried chicken, which I like to take the skin off of because eating that’s like eating rubber bands, but I know a lot of people like it and are welcome to it. Then there’s potatoes and beans, and it’s all you can eat, but be sure to save a little room for the cake! Where’re you from?”

We tell her and she points excitedly to the next table. “Why, these folks are from Rochester!” she says, causing the family to sit up fast and look around. 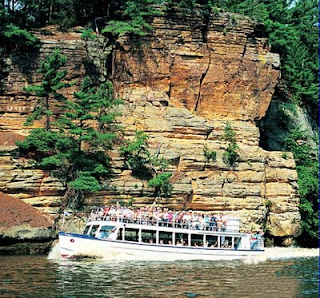 Wisconsin comes from an Indian word that seems to get translated to suit whoever’s explaining it. In the Dells it means “dark waters” and is joined with a French word for “flat rocks.” And that does sum up the waterway. The Wisconsin River is a 435 mile stream that cuts the state in two and goes on to flow into the Mississippi. The darkness of the stream comes from tannic acid in the many Tamarack trees that line the banks. There’s good fishing throughout the state, with white bass, walleyes and sturgeon the favorites.

The river was a mainstay of the loggers 150 years ago, and the Dells must have been a bane. They were forced to break up their large rafts of logs into smaller vessels, reassembling them only after they’d navigated the twisting river and its high, colorful walls.

Those walls are what the tourists come to see. Best thing is to take a boat trip, a feature for over a century. With any luck you’ll get Al Rice as your guide, an area native who calls himself “the ol’ river rat.” He spins out a patter full of nonsense and whimsy as he points out the unusual features of the stratified rock.

“Whoever designed these Dells must have known Wisconsin would become the country’s leading dairy state. Because you can see an image of Elsie the cow and an old-fashioned milk bottle on this wall ahead.” There it is, a fanciful arrangement of shadows and color. Cameras click. “Those who saw it, stamp your feet.” There’s a mighty tramping. “And those who can’t see it now, well, that’s because it’s . . . pasteurize.”

These formations have the distinction of being the oldest known exposed bedrock in the world, and grow their own kinds of tree and plant life. Cliff-dwelling birds build mud nests against the walls. A man named Myron Kilbourn first saw the potential of settling in this river area back in the 19th century, but was chased out of an area downstream he first thought desirable. He established a township he named for himself; in 1935 it was changed to the name it bears today. 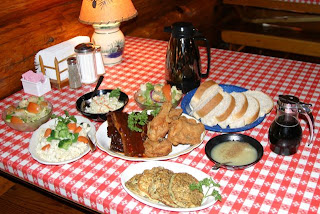 Roxanne has been working in the Dells for several years, and even lived in town for a couple of them. She enjoys meeting new people, but lives quietly on the outskirts now, just her and her cat. But you can’t imagine her as a quiet sort of person. “You be sure to be here for breakfast,” she says as she brings out our dinners. “And ask for me. That’s the shift I usually work, and I like that ‘cause it gives me the rest of the day off.”

Dinner comprises an endless stream of servings from the kitchen. A pot of coffee. A pitcher of water. A plateful of huge bread slices. Then dinner arrives: platters of barbecued ribs and fried chicken, with sides of mashed potatoes, gravy and string beans. “All you have to do now is eat eat eat!”

The punchline to all this is as unexpected as it is unbelievable. The meal is delicious. This pre-fab-seeming assembly-line food is actually prepared with considerable care. The ribs are buttery, in a rich homemade sauce. The potatoes are real, lumps and all. The chicken is moist and crunchy in all the right places. We share our astonishment with Roxanne, who took it in stride. “Toldja it’d be good.”

We still didn’t believe it, and took her advice. We returned for breakfast. It was just as good.

One of my favorite memories. I drank my tea for a decade or more out of a blue and white enamalled cup that I bought there. All the food was served on the same ware. It was kid-like fun to eat there.