The Art of the Pantry

From the Food Shelf Dept.: Restaurant reviews are finite things as places change or close or simply change their menus and prices. Which won’t stop me from reprinting them here, but this time I’m exhuming a helpful piece about the staples to keep on hand.

WE’LL BUY A LEG OF LAMB for Easter dinner. We’ll craft a dessert from fresh strawberries as the new Florida crops keep heading north. But those are dishes made with a menu in mind. It’s when dinnertime sneaks up on you unannounced that you need to be ready with a staple-stocked pantry, which, for the purpose of this piece, I’m expanding beyond merely dry storage. 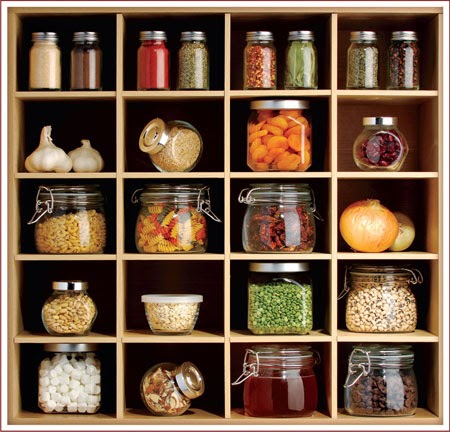 Along with my own fussy requirements, I consulted the lists in my favorite all-around cookbook, Mark Bittman’s How to Cook Everything (Macmillan), as well as the unobtrusively healthy A New Way to Cook by Sally Schneider (Artisan).

“Flour, cornmeal, and the like,” writes Bittman, and Schneider expands upon that, specifying unbleached all-purpose flour and stone-ground cornmeal for polenta. I would add that it doesn’t hurt to have whole wheat and cake flour as well, and with the last-named on hand, Schneider’s recommendation of a bar of semi-sweet chocolate and some Dutch-process cocoa powder might find their way into a worthy dessert.

Auxiliary to that are baking soda, non-aluminum baking powder, honey (support your local apiarist) and sugar: white, dark brown, confectioner’s and molasses. If you do a lot of baking, or even for pancakes and waffles, put some vanilla beans in an air-tight container with a heap of sugar and you won’t need vanilla extract.

Schneider names currants, apricots and cherries as the dried fruit you should stock, although I add good old raisins; pine nuts and walnuts may seem like luxuries until you get used to having them on hand. [NB: I’ve since given up on pine nuts. They’re too expensive, and sunflower seeds make a good substitute, especially in pesto.]

Canned plum tomatoes I buy by the case, San Marzano variety when possible. You don’t have to chop them into a sauce: squeeze each tomato through the sieve of your fingers, taking care to squirt the pot, not the kitchen, with its juice. Make sure you also have a few cans of tomato paste. And a bottle of ketchup.

You know those spice racks with the cute little bottles, all the same size and shape, that sit or hang or rotate together? Compare the color of the paprika therein with fresh paprika. Enough said.

Dried herbs and spices should be replaced every six months or so, which means you should try to buy what you’re going to use in that time. Most people would benefit from using more spice in their cooking, so experiment. The chef who first taught me to cook insisted I focus on a particular herb or spice and get to know it alone, in combination with foodstuffs and in combination with other spices. My clove week was an unusually aromatic time in that kitchen.

You can make your own curry powder if you add a few spices to that list. Bittman gives the following recipe: In a hot skillet, toast pieces of nutmeg, black peppercorns, cloves, cardamom seeds, a cinnamon stick, fennel seeds, fenugreek seeds, cumin seeds and coriander seeds, then grind them and add ground ginger and turmeric. Way better than store-bought.

Essential dried herbs include bay leaves, oregano, rosemary, sage, savory, thyme, to which I add basil and marjoram. Although I detest garlic salt, there is some good granulated garlic to be found, an essential for a dry rub for smoking meat.

Other flavor-altering necessities are Worcestershire sauce and low-sodium soy sauce; because I like to make stir-fried dishes I also keep black bean sauce, oyster sauce, chili-garlic sauce, fresh ginger and Dijon mustard. Actually, I use the mustard everywhere.

Salt, writes Schneider, “is essential to good cooking, for it brings out the flavor in foods.” For general-purpose use, kosher salt is best. Table salt has too much processing and ends up saltier than kosher salt, so if that’s what you have, use less of it; sea salt is the purest; use it for special occasions, and then only sparingly.

By now we’ve all switched to olive oil because of its monounsaturated fat makeup. “The less processed and adulterated the oil,” writes Schneider, “the more healthful and better tasting it will be.” And, she demands, “always buy oils that are cold-pressed.”

There’s some controversy over the use of extra-virgin olive oil as a cooking medium. It “doesn’t tolerate high heat,” says Schneider, “so use pure olive oil for pan-frying and searing.” My own experience with the cheaper brands of extra-virgin is that it works just fine on the stove, but you’ll want to shell out a few extra bucks for a great-tasting olive oil to use in salad dressings and the like.

If you don’t want that olive flavor – in pancakes, for example – use canola oil. Nut oils (which need to be refrigerated) are good flavoring agents, while roasted sesame oil is a must for flavoring Asian recipes. A can of vegetable shortening allows immediate access to cookie- baking, which can be a necessity at 3 AM on a sleepless night.

Try using vinegar in place of salt. You should have a few different types of vinegar in the kitchen. Schneider: “Well-made vinegars, naturally fermented from good wines or fruit juices, do not have the characteristic harsh bite of most common commercial vinegars. The less processed they are, the better they tend to be.” She recommends balsamic, Champagne, aged sherry, cider, rice wine and red wine. If you’re using the type of balsamic vinegar sold in supermarkets (the $5 variety), it may have “rough and unbalanced flavors. Stir in a little brown sugar to mellow and concentrate the flavor.”

The other important flavoring liquids are wine and spirits. I worked in a restaurant in which the chef decanted all leftover wine into two color-appropriate bottles, and this he used instead of any fat when he made stovetop meals for himself. If you don’t have access to such a supply, you’ll want inexpensive (but drinkable) red and white wine on hand and a bottle of sherry for stir-fried dishes. Doesn’t hurt to have a bottle of brandy as well, which is great for finishing sauces.

Finally, stock. Have canned low-sodium chicken broth on the shelf for emergencies, but homemade stock is best. Buy whole chickens, take off the breasts and legs, throw the rest (with the skins, vegetable peelings, celery and carrots, peppercorns, some seasonings) into a pot of water and simmer for a couple of hours. Refrigerate some of it for immediate use; the rest you can keep in the freezer, alongside that other essential, coffee beans.