From the CD Shelf Dept.: Music and Arts has since issued a follow-up volume to this terrific collection of vintage Casals Fesitval recordings. The review below originally ran on the now-defunct website andante.com.

THEY’RE HISTORIC, AND WITHOUT A TRACE of the historically informed. A cornucopia of Romantic-era chamber classics featuring many of the 20th-century’s greatest musicians in combinations made impossible at the time of recording by record company contact exclusivity. 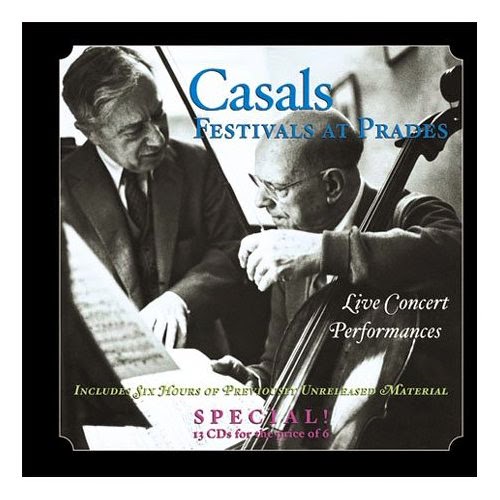 Best of all, they’re live. They date from an era when a more consistent degree of risk-taking was common in the concert hall, producing an excitement lost in the re-takes of the recording studio. An excitement that’s also all the rarer in today’s play-it-safe musical world.

Casals and company can’t be accused of playing it safe in the performances on this 13-disc set, performances culled from Prades Festival concerts between 1953 and 1960. Although about half of the material has appeared on earlier CD and LP issues, the rest is previously unreleased – and none of it, as far as I’ve been able to determine, duplicates any of the material released on LP by Columbia in the 1960s, despite an overlap of repertory and artists.

Founded in 1950, the annual summer festival (in what was then Casals’ home town) was conceived to honor the 200th anniversary of Bach’s death, although it really was the successful effort by several of Casals’ musical associates to coax him out of a long musical exile. Casals not only agreed to participate but also opened six of the programs with a Bach Cello Suite.

Only one of the suites – from a 1953 recording – appears in the present set, but the repertory also includes Brahms’ three piano trios as well as the less-known but still compelling three by Schumann, the five cello sonatas by Beethoven, several Beethoven piano trios, three quartets for assorted instruments by Mozart, and a sublime 1953 performance of Schubert’s String Quintet in C Major – not the Sony-released version with Isaac Stern, Alexander Schneider, and others, but an ensemble comprising violinists Jacob Krachmalnick and Orrea Pernel, violist Karen Tuttle, and cellists Madeline Foley and Casals.

Another work that duplicates Columbia-issued repertory is Schumann’s Piano Quintet No. 2 in E-flat major, but instead of Myra Hess, Isaac Stern, and so forth, the artists are Rudolf Serkin and the Végh Quartet, weaving a stunning flow of majesty and mystery throughout this performance-dependent piece.

Any William Kapell recording is worth examining, although the two selections in this set showcase his more subdued chamber-partner side. An energetic 1953 performance of Mozart’s Piano Quartet No. 2 also includes Arthur Grumiaux, Milton Thomas, and Paul Tortelier, although it’s mislabeled as a piano trio with the liner notes trying to justify the fourth musician by suggesting that Tortelier was on hand to contribute a bass line! Which is all the more amusing in that a 1956 performance of the same piece opens the first CD.

Kappell and Grumiaux also join forces in Beethoven’s Violin Sonata No. 1, one of the least of his ten such sonatas but given renewed credence by a stirring performance. The trio of Serkin, Casals, and violinist Szymon Goldberg brings luster to Beethoven’s Piano Trios Nos. 4 and 5, both recorded in June 1954.

The only vocal work in this set is also the only orchestral work, and, occupying seven minutes at the tail end of a short disc, seems more like filler than forethought. However, because it's Victoria de los Angeles singing Mozart (“Zeffiretti lusingheri” from Idomeneo), it makes you long for more from that 1959 concert.

Not every performance in this set has that polish. Huff all you want about the appropriateness of playing Bach’s sonatas for viola da gamba and harpsichord on cello and piano, but Casals made some brilliant recordings in the latter instrumentation. His 1956 performance here of the Sonata No. 1 in G Major, with pianist Mieczyslaw Horszowski, stumbles in the opening movement and that casts a dullness over the work as a whole.

And, although Casals’ pairing with pianist Alfred Cortot for a 1958 performance of Beethoven’s Cello Sonata No. 3 recalls a legendary association going back to 1905, it’s a tentative reading full of missteps leading to a full-blown train wreck in the finale. Both men were in their 80s at the time, but Cortot didn’t endure as well as Casals.

With a collection this large, however, any disappointment is quickly followed by a thrill. Marcel Tabuteau joins Pernel, Tuttle, and Tortelier for a definitive performance of Mozart’s Oboe Quartet; pianist Karl Engel, violinist Sándor Végh, and Casals play Mendelssohn’s Op. 49 trio with vigor and panache that places the 84-year-old cellist on equal footing with the comparative striplings beside him.

Although it’s all familiar repertory in these recordings, the performances – lush, impassioned – present an alternate universe of interpretive style. It’s a must-have set for chamber music lovers, who will be pleased and provoked by it, but never bored.