To Be or Not to Be

Guest Blogger Dept.: As a child, I discovered a volume among my parents’ collection titled The Family Album of Favorite Poems, most of which was incredibly boring – it ran to nearly 600 pages, with room for such turgid classics as “The Old Oaken Bucket” and “Dover Beach.” But a section of comic verse opened me to the possibilities of wordplay and rhyme. I memorized many of them, and have posted many of them here, including verse by Guy Wetmore Carryl, Harry Graham, and others. But here’s an anonymous one that remains charming in its straightforward silliness. 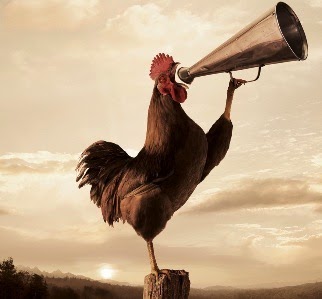 I SOMETIMES THINK I’d rather crow
And be a rooster than to roost
And be a crow. But I dunno.

A rooster he can roost also,
Which don’t seem fair when crows
can’t crow.
Which may help some. Still I dunno.

Crows should be glad of one thing,
though;
Nobody thinks of eating crow,
While roosters they are good enough
For anyone unless they’re tough.

There are lots of tough old roosters,
though,
And anyway a crow can’t crow,
So maybe roosters stand more show.
It looks that way. But I dunno.