More Out of the Hat Dept.: Before it settled into its current incarnation as “Road Show,” Stephen Sondheim’s most recent musical (we’re still waiting for the David Ives collaboration) was titled “Wise Guys” and then “Bounce,” but it celebrated the Mizner brothers, Wilson and Addison, an idea the composer-lyrist had in mind for decades. It just had a successful run in Chicago – where “Bounce” debuted over a decade ago, and which produced an album that I reviewed in 2004.

STEPHEN SONDHEIM’S MOST BROADWAY-SOUNDING SHOW in 40 years won’t be coming to Broadway any time soon. After many years of workshop productions, Bounce premiered in Chicago last summer and then moved to Washington, D.C., where reviews were tentative enough to pull the plug. 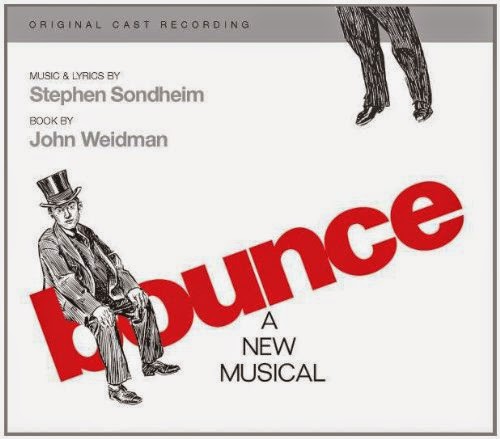 But it was recorded there, giving us a 74-minute trip through a score that has all the hallmarks of latter-day Sondheim wrapped in a peppy, upbeat score that harkens back to A Funny Thing Happened on the Way to the Forum.

Wilson and Addison Mizner were entrepreneurs whose ventures – especially Wilson’s – soon turned into cons, culminating in their participation in the Florida land boom of the 1920s. Originally conceived as a sort of vaudeville show, Bounce (book by John Weidman) gives an episodic look at the brothers’ exploits and their tumultuous relationship.

Some vaudeville flavor remains, especially in the title song (reminiscent of “Everybody’s Got the Right” from Assassins, a song sung at a carnival), but behind it is a carefully crafted score that re-works and develops musical elements to go with an evolution of lyrical ideas, tracing the concept of finding and seizing opportunities in life.

This includes opportunities for love, of course (or it wouldn’t be a musical theater piece), and Sondheim provides some less-cynical-than-usual songs like “The Best Thing That Ever Has Happened” and “You,” in which simple, direct lyrics underscore aching melodies.

The Sondheim wit sparkles here, too; Wilson’s honeymoon begins with a reprise of “The Best Thing” and quickly turns into a side-show of his proteges in “I Love This Town,” heralding his advance upon New York. And “Talent,” sure to become a cabaret staple, is the plaint of a man grappling with his love of art:


I had this dream of becoming an artist –
A painter, a poet, who knows?
I had a nice little talent for drawing
And a natural feeling for prose.
I even began to compose.

Like the scores to his other shows, particularly unsuccessful ones like Merrily We Roll Around and Anyone Can Whistle, it benefits from repeated listening. This may be Sondheim’s curse. A Lloyd Weber score reveals what mysteries it contains the first time through and then grows tiresome; Sondheim’s stuff gets better.

The Bounce recording at least gets us familiar with a show that warrants a New York production. The cast, by and large, is very good, the orchestra is terrific and recording quality is excellent. The austere packaging includes no production photos or bios, which is unfortunate, but it’s better to have this much rather than nothing at all.