JAZZ IS RESTLESS MUSIC. Louis Armstrong’s mid-’20s recordings gave the music an identity that tore it away from the tea-dance stylings of the likes of George Olsen, and set the stage for swing, a development of the big band sound that Armstrong enjoyed. But World War Two thinned the band ranks and saw the rise of the small-group sound of be-bop. Artie Shaw got it, Benny Goodman didn’t, and Louis didn’t want it. He soldiered on with his big pre-war ensemble. 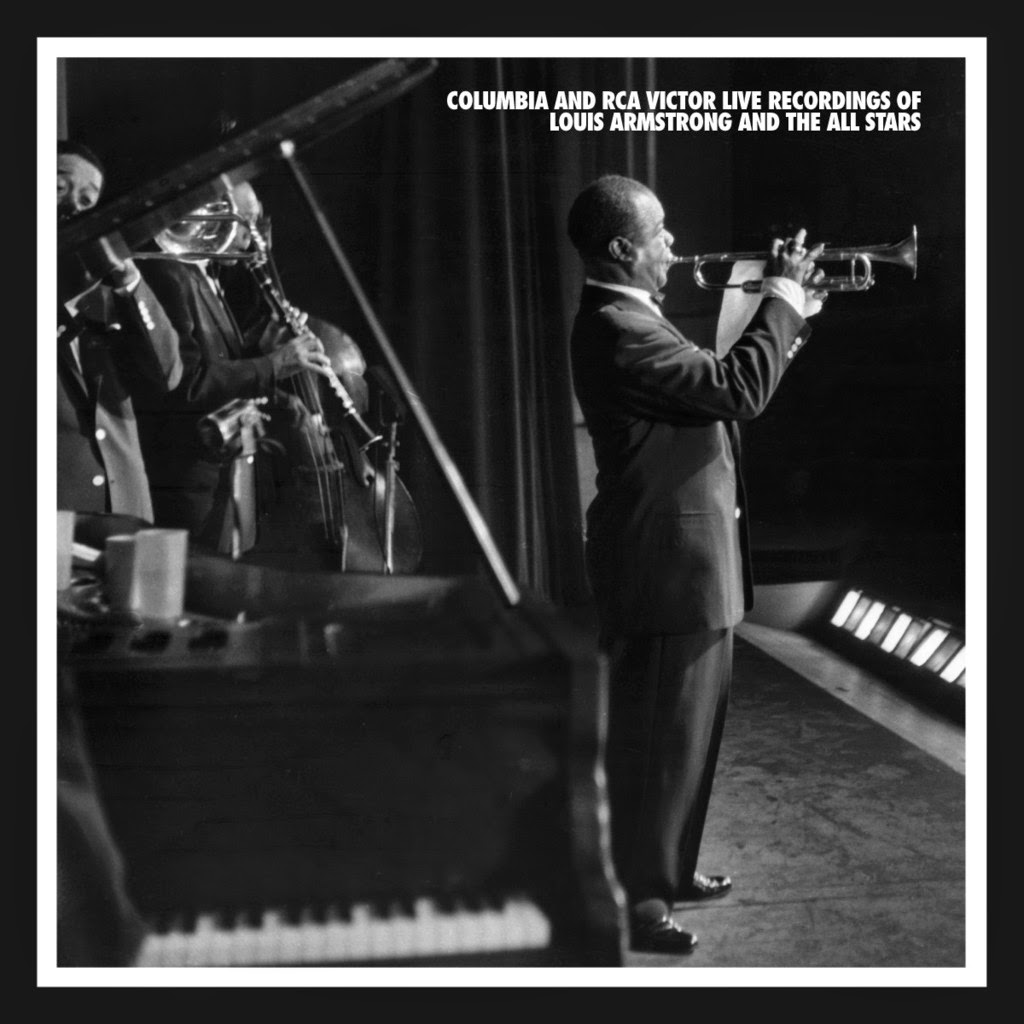 Mosaic’s new nine-CD collection of Armstrong’s All Stars sessions opens with the concert on May 17, 1947, that changed everything. The story of its inception is recounted in Ricky Riccardi’s excellent program notes, a story wisely left in press agent Ernie Anderson’s own words – for it was Anderson who bribed Armstrong’s intractable manager Joe Glaser into allowing his client to perform in a small-group setting that fateful day.

Because from then on it was pretty much small groups all the way, with some actual stars easing in and out of the All Stars aggregation. This CD set covers 11 years of All Stars concerts, finishing with Armstrong’s previously unreleased 1958 Newport set (complete with some of the most wonderful profanity to find its way on a recording).

Although it’s a label-imposed phenomenon, this probably is a reasonable ending point; Louis’s subsequent recordings were given by the avaricious Glaser to such labels as Verve, Roulette, Audio Fidelity, and MGM. Although the unlikely 1963 hit “Hello, Dolly” put Louis back on the map, his studio recordings suffered from tasteless attempts to recreate that.

Put all that aside. Here are ten hours of Louis at his best, interacting with his friends on stage and with the audience before him, and both elements combined to inspire amazing feats of trumpetry and, of course, the signature vocals that put him at the top of the all-time greats.

Listen, for example, to the June 1, 1956 performance at Chicago’s Medina Temple. It was intended to offer an overview of Louis’s career, with narration by Helen Hayes, and producer George Avakian had hopes of varying the repertory away from material Armstrong had recorded again and again. But the All Stars had just returned from a punishing overseas tour and, as usual, Louis went his own way when he hit that stage. The result was considered too disappointing to release when recorded, but the concert tapes were salvaged (record companies love to throw things away) and the narration removed and it proves to be a red-hot performance.

But this gang never seemed to tire. The first session in this collection, that 1947 Town Hall date, kicked off at 11:30 PM with no rehearsal and, unlike subsequent All Stars sets, featured Louis and his trumpet through 21 numbers, most of them with vocals. After a quartet of quartet numbers, Jack Teagarden joins in, and alongside his nonpareil trombone work are vocals on “St. James Infirmary” and the classic “Rockin’ Chair” duet with Armstrong. Bobby Hackett (who chose the musicians) and Peanuts Hucko are here in top form, and will return only for the very last session of this collection.

The recorded sound of that particular concert is mediocre, drawn from aging acetates, but they’ve been electronically scrubbed by Andreas Meyer, who knows where to draw the line and thus allows us to have high frequencies, even if they’re a little hissy. In the few other instances where the source was a challenge, the result sounds okay. Most of the set sounds fantastic. You have to trust your ears to do some of the cleaning – as one producer puts it, “The noise goes away.”

The All Stars proper kicked off three months after that Town Hall concert, and three months after that they hit Carnegie Hall, with Barney Bigard and Teagarden among the players. The recording – or what survives of it – is here issued for the first time, foreshadowing the performance two weeks later in Boston that was released in truncated form on Decca and thus isn’t eligible for inclusion here. (But you should avail yourself of the fully restored two-CD set.)

Here the pattern is set for the many All Stars concerts to come, with Velma Middleton among the vocalists and solo features offered to the various bandmembers. The roster never completely stabilized, but the lineup you see in the movie “High Society” dominates – Trummy Young, trombone; Edmund Hall, clarinet; Billy Kyle, piano; Barrett Deems, drums; and Arvell Shaw, bass. And we get both of their features from that film – “High Society Calypso” and “Now You Has Jazz” (a duet with Young) at that 1958 Newport gig, which also contains the four numbers included in Bert Stern’s film documentary “Jazz on a Summer’s Day.”

The joy in hearing Louis live and with these players is that he was always inspired by the audience to give more of himself than often was the case with the studio recordings – especially as Glaser tended to saddle him with crappy repertory. We get more of Armstrong’s favorites here, which means there are songs we’ll hear repeated, songs like “Tiger Rag” and “Mack the Knife” (five times each), “Royal Garden Blues,” “Rockin’ Chair,” and “Indiana” (four), and “On the Sunny Side of the Street,” “Back o’ Town Blues,” “Basin Street Blues,” and “Undecided” (three). While I haven’t put in the time to parse each of them into individual solo moments, the cumulative effect is only to give the sense of returning home.

Interview segments, a cheerful stop in Ghana, and a slightly pretentious “St. Louis Blues” with Leonard Bernstein helming the orchestra round out the set, each with its own charm. But the high point for me is a 1 AM recording session in Milan that wasn’t supposed to be have an audience – Avakian intended to dub in applause later, as he was all too wont to do (see “Ellington in Newport”) – but an audience gathered, the band took off, and even the “Dardanella” that was performed as dawn broke was as fresh as the rest of it.

Columbia and RCA Victor Live Recordings of Louis Armstrong and the All Stars
Mosaic Records
Posted by B. A. Nilsson at 2:17 PM