Kitchen for the Holidays

From the Food Vault Dept.: One of the joys of skidding into the year’s end was diving into the cookbooks that crossed my desk. Being no fan of televised cookery, I avoided the celebrity-driven titles, although, as you’ll note below, I wasn’t immune to the lure of such celebrity chefs as Ferran Adrià (whose elBulli restaurant closed in 2011) and Heston Blumenthal (whose Fat Duck restaurant continues to operate west of London). Here is the roundup I wrote in 2008.

COOKING AND COOKBOOK READING are separate activities in my house, and I’m a devotee of both. Where others plunk themselves in front of the cacophonous Food Network, I prefer to enrich my culinary ambitions with the quiet majesty of the page. Then I photocopy the recipes that intrigue me so that the books themselves remain as pristine as possible. 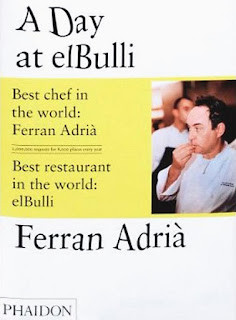 Shopping from my list, therefore, puts you in no danger of presenting a loved one with some overhyped celebrity-driven screed. The celebrities we’ll meet are the chefs themselves, generally as insane as any A-list actor or music star, but at least proffering actual nourishment.

Heston Blumenthal, for example, injected one of his sous chefs with hot pepper essence and studied a brain scan of the result in order to pinpoint where the hotness hits. Dedicated? Insane? You might as well ask the same of Van Gogh or Beethoven. Blumenthal’s The Big Fat Duck Cookbook (Bloomsbury, $250, bloomsbury.com) celebrates the intricately creative fare at his Berkshire, England restaurant, a perennial Michelin three-star winner. Not surprisingly, this big fat book is to cookbooks as a Blumenthal entrée is to more standard fare: unpredictable and gorgeous, with a spectacular design by artist Dave McKean.

The aesthetics of dining are vital to another Michelin fave, elBulli, which perches on the coast of Spain and sells out a year’s seating on a single, preappointed day. Chef Ferran Adrià has been acclaimed as the world’s best, and his book A Day at elBulli (Phaidon Press, $50, phaidon.com), starts with photos of the early morning and moves hour by hour through the process of designing the day’s menu, prepping the food and restaurant building, feeding the staff, and then welcoming the lucky diners who will partake of 32-course meal in which no course looks or taste like what you’d expect, yet transcends those expectations.

As I noted in a recent column, Thomas Keller is another of the many current chefs re-thinking the entire process of cooking and dining. Under Pressure: Cooking Sous Vide (Artisan, $75, artisanbooks.com) celebrates Keller’s newest enthusiasm, which is a carefully measured process of cooking items at a specific temperature. Not surprisingly, in Keller’s hands it becomes much more than that, as the acclaimed chef shows how he further enhances this technique to produce the meals at his restaurants The French Laundry and per se.

Almost 30 years ago, David and Karen Waltuck opened Chanterelle in Manhattan’s SoHo district. It’s now in a handsome TriBeCa building, where it continues to set culinary standards. One of its secrets is a keen sense of hospitality, which informs David Waltuck’s Chanterelle (Taunton Press, $50, taunton.com). He targets the 150 recipes for the home cook, and provides enough assembly detail to guide the reasonably skilled to successful results. Never made an aspic? You’ll learn the secret behind it for your preparation of duck terrine with pistachios & Armagnac. 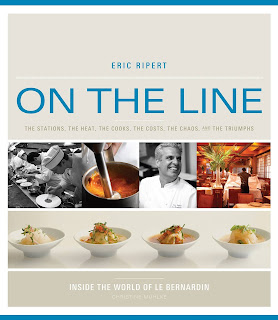 Eric Ripert’s restaurant Le Bernardin is on Manhattan’s West 51st St., serving seafood. Redefining seafood, actually, and setting standards that have reverberated throughout the industry. While the second half of Ripert’s book On the Line (Artisan, $35, artisanbooks.com) is a fish-by-fish (and other items) treasure trove of recipes, you’ll start with a station-by-station tour of the kitchen, and your understanding of restaurants will be enhanced immeasurably.

Cuisines of Spain, Mexico and parts of South America inform the creations of Jose Garces, whose Philadelphia restaurants Amada, Tinto and Distrito are must-visits. His book Latin Evolution (Lake Isle Press, $38, lakeislepress.com) gets into the component flavors and cooking techniques, then puts them back together in intricate ways. Not for the easily intimidated, these recipes ask you to create foam and cook sous vide, but a dish like shredded confit pork with rosemary-brown butter applesauce and Catalán escarole is worth the effort.

Two different views of Italian-inspired cooking come from San Francisco’s A16 and Philadelphia’s Vetri. Nate Appleman and Shelley Lindgren wrote A16 Food + Wine (Ten-Speed Press, $35, tenspeed.com) to share their insights into ingredients, beginning with wine and traveling through the components (pizza included) of their restaurant’s fare. Marc Vetri betook himself to Italy to learn in the trenches, and Il Viaggio di Vetri (Ten-Speed Press, $40, tenspeed.com) is a memoir of those travels, with recipes and photos and cooking techniques.

I’m no fan of hurrying your food preparation, but Bon Appétit came out with such a nice basic cookbook two years ago that I picked up the new Bon Appétit-Fast Easy Fresh Cookbook (Wiley, $35, wiley.com) and was persuaded, in spite of myself by the recipes. There are over a thousand, and they really do give you a leg up when you’re faced with fixing an unplanned meal.

But forget recipes for a moment. The Flavor Bible, by Karen Page and Andrew Dornenburg (Little, Brown, $35, www.littlebrown.com), contains not a one. It’s an exhaustive list of the component items you mix into meals, and it gives many a history of those associations along with excellent ideas for combinations you may never have thought to achieve. Always reliably engaging writers, Page and Dornenburg make even as austere a premise as this one work. 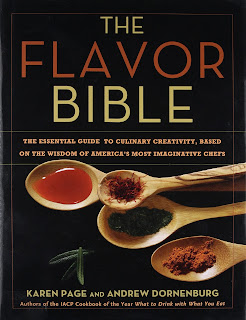 Keeping with fundamentals, nothing dresses a dish more nicely than well-chosen and tasty sauce, and culinary polymath James Peterson has revised his classic Sauces (Wiley, $50, wiley.com) to include more contemporary recipes that don’t rely on butter and flour. Its 600 pages tour the world, giving a fascinating history behind the saucier’s art as well as some 450 recipes.

Who wrote the “fortune” in your fortune cookie? En route to answering that question, Jennifer 8. Lee discovered a fascinating range of stories behind the phenomenon of Chinese restaurants in the United States. The Fortune Cookie Chronicles (Twelve, $25, twelvebooks.com) looks at how the menu developed, where the workers come from, and even who invented General Tso’s Chicken (not surprisingly, no generals were involved).

Marcella Hazan advanced the art of Italian cooking like nobody else, and her many books, starting with 1973's Classic Italian Cook Book, are essentials for your culinary shelf. The energetic 84-year-old finally wrote her memoirs, and Amarcord (Gotham Books, $27.50, us.penguingroup.com) is as lively and entertaining as you’d expect. Her gospel is that cooking comes out of life itself, and there’s no shortcut around living that life as richly and fully as possible, and excellent thought with which to inform the holidays ahead.