From the Vault Dept.: Back in the day, I was eager to write about anything. When there was nobody else available or willing to cover a 1986 Ice Capades show in Troy, NY, I jumped (sans skates) at the chance, and got a pair of pieces out of it: A review of the performance itself, and an interview with then-star Scott Hamilton, who would be unceremoniously dumped by the corporate powers a couple of years later – but that impelled him to start the skating-performance group Stars on Ice. Now let’s go back a few years . . .

THERE WERE MOMENTS during the opening-night Ice Capades performance Tuesday when you couldn’t be sure who was doing the “oo-ing”: kids or adults. The RPI Fieldhouse was filled with both to witness the latest in the ever-changing Ice Capades spectacle – and none was disappointed. 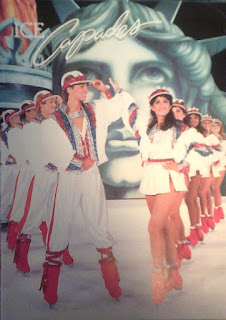 A special feature of this year’s program is Olympic gold-medalist Scott Hamilton, who performed two contrasting solos. Hamilton’s reputation certainly preceded him and he wowed the crowd with that blend of skating, dancing, and acrobatics that is unique to him.

He’s got some pretty good competition, too: solos by Robert Wagenhoffer, Priscilla Hill, Vicki Heasley, and Jeff LaBrake were top-notch, and there was superb partnering by the teams of Tony Paul & Terry Pagano and Burt Lancon & Tricia Burton.

In fact, Lancon & Burton, who threatened to steal the show at the end of the first half, returned to top that effort with an unexpected comedy routine.

Comedy is a staple of the Ice Capades program, and the British team of Biddy & Baddy brought to the ice a knockabout routine in the admirable tradition of Laurel and Hardy. It runs in the family: each has a son, and Dave ‘n’ Joey presented a sketch titled “Romance of the Vagabonds” that suffers no pretensions to highbrow humor. Appropriately, the four teamed up for yet another comic sketch.

Lights and music – and sequins galore – are a tradition with the Ice Capades. “Visions” is the catch-all title for a second-act sequence that includes black-light dancing butterflies, brought to the rafters by aerial illusionist Peter Foy.

And, of course, some silliness, such as the spy sketch “For Your Ice Only” that featured “Jane Blonde” and “Dr. Coldfinger.” Credit Leslie Percelly with a fun characterization.

Perhaps the best tribute to the show is to observe how easy it is to forget that, on top of everything else – costumes, lighting, dancing, and so on – this is a company of top-rank skaters. Best of all, they more than substantiate that reputation.

“I LIKE THIS HALL. It’s just the right size for an audience. You can’t see anything in some of those monster arenas we play.”

Scott Hamilton was admiring the inside of the RPI Fieldhouse over a cup of coffee Wednesday morning as he prepared to talk about a career that brought him to the peak of amateur excellence – the gold medal at the 1984 Olympics – and on to his professional appearance here with the Ice Capades. 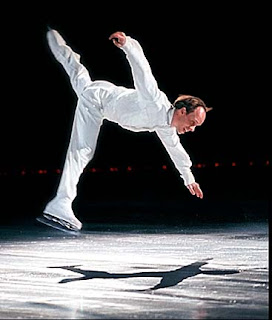 Pro status means “learning a lot of new tricks, and all the different aspects of show skating,” he said. “I’ve been working year-round since turning pro. I think my schedule has been working out to something like 185 shows in 24 weeks.”

Even more significant is the change he has inspired in the tradition of male skaters, streamlining the uniform and inventing footwork all his own. He is small and very thin, with a boyish mop of sandy hair. At the Fieldhouse, he began his morning warmup in jeans and dark sweatshirt.

He is passionate about his work – you can see it in his face – but what comes through even more is a combination of joy and pride. A double flip is followed by a double axle and Hamilton grins as he makes it look so effortless. He has a good showman’s sense of what will thrill the crowd, so a double toe loop is followed by two triples, and then, guaranteed to grab applause, a backward somersault.

“That’s not as hard as it looks,” he said. “I mean, you don’t want to fall on your head or anything. But it only took me a day to learn it.

“Much of this show stuff is really no easier than what I did for the Olympics. It’s geared for an audience, and I think that, physically, it’s much more difficult. Plus, I have to do it every night.”

He confessed to missing the competitions. “I miss it a lot, in fact. I went to the European Worlds this year and that really brought home how much I enjoyed doing it.

“I’d like to see some competition on a professional level, and there does seem to be a World Pro Skating Championship coming. Right now they’re able to get a lot of good skaters in one place, but the promoter still needs a system of judging, something like the PGA or World Tennis Association uses.

“What I don’t miss is not having money. I was broke and living in a friend’s basement even as I was winning all those competitions. Now that I’ve turned pro I’m making some good money.

“And the pace is pretty much set for me right now. There is a lot of challenge to what I do, and there’s something in me that enjoys it, enjoys always getting better, which happens the older you get. I mean, your body may say ‘no’ more quickly, but that just means you start warming up a little earlier.”

Touring with the Ice Capades has been an immediate hit with the audiences, but acceptance from the other skaters took longer. “That’s because I came in as a headliner, and a lot of people in the cast didn’t know how to treat me. I mean, it was a situation where they wouldn’t invite me out afterwards because they assumed I had something else going on.

“But this is a group that pulls off a great product with a great sense of camaraderie. Everyone is so good, and nobody wants to stand out, you know, as ‘the bad one.’ Everyone wants to make the show as good as it can be.”