From the Culinary Vault Dept.: Now it’s 40 years for the Raindancer Restaurant in Amsterdam, NY, an area institution that is holding its own in these pandemic-straitened times. A modest, reliable place for a casual meal or more fancy fare, it offers seating – but check the website so you’ll know the current protocol. Here’s my review from a decade ago.

IN MY NECK OF THE WOODS, which is to say rural Montgomery County, the big city is Amsterdam. Don’t even start with me about “Smallbany.” For over 30 years, the Raindancer Restaurant has dominated Amsterdam’s culinary scene, and with good reason. It’s a classic steakhouse, clinging to a tradition that has otherwise vanished. It has reasonable prices, contrasting ironically with the recent area phenomenon of pricing the stuff out of sight. And it’s family run, which gives it a friendly personality that chain restaurants never can achieve. 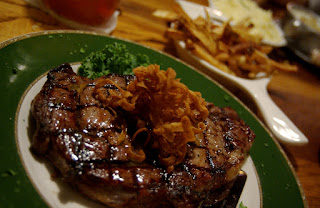 I wrote about the Raindancer 20 years ago and again ten years later. Except for the pricing and some physical expansion, little has changed. The salad bar still goes strong. The prime rib ($30) is still a hearty seller. The lighter-fare menu that was in place a decade ago gives lighter alternatives. A new emphasis on wine means that more of it is available and that periodic wine-tasting events are well attended.

The youthful servers are friendly and attentive, so there’s a comfortable sense of being in good hands. So let me quickly get out of the way the one problem I encountered.

As much as I like a good cut of beef, it’s something I rarely order when dining out for a review. Why bother? It’s an unchallenging item. And the beef that’s available rarely is aged sufficiently, leaving it light on flavor. But this is a beef place, so I ordered a sirloin strip ($26), the tastiest cut of the beast. I ordered it rare. It arrived the far side of medium.

But by the time such a mistake is revealed, there’s rarely the time to correct it. Everybody else is eating. The replacement probably will be (and was) underdone. On the bright side: I grilled it at home to a good red rareness.

“That shouldn’t have happened,” said owner (and restaurant founder) Walter Porath. He wasn’t satisfied that the steak was merely replaced – he wanted assurance that I was happy enough that I’d continue as a patron. “I checked on the recent returns, and they really have been very low. So we’re not making many mistakes. But it still shouldn’t have happened.” 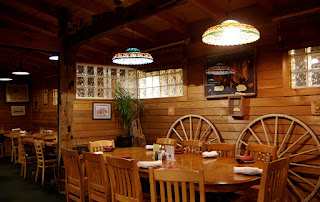 Rare orders have grown rarer over recent years thanks to the various beef-industry scares, bolstered by the distribution of ground beef unreliable enough to necessitate overcooking – and the greedy meat-packing industry gets away with it!

I did return, a few days later. We sat in a different section (there are many), in the hands of a different server, and I ordered a rib-eye ($27). This time it arrived just as ordered. Rare is a tenuous state. Beef continues to cook after it’s yanked off the grill, and the correct strategy is to undercook it enough that it can properly finish during the few minutes of post-cooking rest it requires.

Other beef cuts include prime rib ($30), filet mignon ($29) and sliced tenderloin teriyaki ($22), and an array of toppings includes gorgonzola butter, Béarnaise, Raindancer steak sauce and horseradish parmesan ($2 each) and the Oscar-esque topping of crabmeat, asparagus and Hollandaise ($3.50).

My wife had the last-named to enhance a preparation of chicken ($19), which gave her two large cutlets served atop a dark Bordelaise with the sun-yellow Hollandaise dripping down its edges. I’ve never been crazy about the combo, but it has a long heritage and is appealing as a hard-to-find classic.

Then again, I’m not crazy about surf-and-turf, which seems gratuitous unless it’s part of a paella. I think of it as the pursuit of American bigness, celebrating excess at the expense of taste. And so n our second visit, my wife asked for surf and turf – but could they combine chicken and shrimp? I don’t know how we stay married.

Of course they could. And did. And it nicely incorporated chicken breast into the garlicky world of scampi.

Entrée plates are presented with little adornment. Steaks get a sprinkling of onion crisps; all entrées get a side of potatoes, the mashed version a particularly good homemade brew. Otherwise, there’s the salad bar. 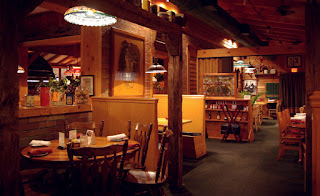 I’m sad to see them disappearing elsewhere. The Raindancer’s is modest compared to, say, the Ruby Tuesday behemoth, but it gives you the greens and tomatoes and cukes and cheese and such along with macaroni and potato salads, beets, slaw and that horror known, ironically, as ambrosia. And hidden within a pile of pickled onions are herring slices, reason enough to visit the bar.

The salad bar is available with soup for $10, an option that appealed to my daughter, who enjoyed a creamy roasted garlic-parmesan preparation.

Other starters include calamari, mozzarella sticks, stuffed mushrooms, spinach and artichoke dip, wings, and a deep-fried onion – what I’ve come to think of as County Fair fare, priced from $7-$9. We destroyed our appetites on the second visit with the Ultimate Nachos ($10), which is its own enormous meal.

Among the seafood dishes are king crab legs ($40 for a pound and a half), twin lobster tails ($31), broiled scallops ($23) and a $30 fisherman’s platter with the above plus shrimp.

The Lite Fair menu is served at lunchtime and available throughout the day. That’s where you’ll find burgers ($9), baby back ribs ($12), a chicken-and-bacon sandwich ($10) as well as a selection of deli sandwiches, salads and wraps.

I’m guessing that only a city like Amsterdam could keep a trip-back-in-time restaurant like this one going. Economic pressures are a little lighter and customer base – bumped when Saratoga is in season – is broader, drawing from the Utica area as well as the Capital Region. Pricing is a little back-in-time, too, making it worth the drive. Although I’ll continue to patronize the place between reviews, we’ll check in for you in another ten years to make sure as little as possible has changed.