From the Classical Vault Dept.: Conductor Arturo Toscanini’s legacy lives on in an endlessly recycled set of recordings he approved for release, and an even greater number of bootlegs that circulate on various European labels and via collectors. RCA, then BMG, now Sony, offered a complete edition in jewel cases with a specially designed glass-door case, then supplanted it with a cardboard-sleeve version. Between those events, they put out a dozen two-CD sets that applied some newfangled digital technology to wrench a more pleasing sound from the recordings, which was achieved with mixed success, although the ones considered below came out nicely. Here’s my brief review of two such sets. 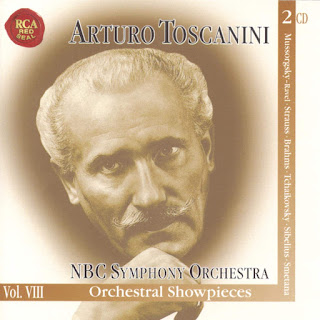 THE LEGEND OF TOSCANINI the firebrand conductor is well documented by the recordings he approved for release by RCA Victor, most of which were made from rehearsals or radio concerts with the NBC Symphony from the 1930s to the ’50s. RCA, now BMG Classics, offered a once-and-for-all CD issue of all those recordings, available as a set or in individual volumes (you can pick up the set at a good price at the Berkshire Record Outlet, by the way).

So why a new series of Toscanini recordings on CD? Milking the catalogue is usually profitable for record companies, but this also has given the engineers a chance to unleash computer enhancements on the sound. The original recordings were made in Carnegie Hall or NBC’s studio 8H (where Saturday Night Live now lives), and they’re notoriously dry sounding. With the passing of certain guardians of the Toscanini legacy, BMG is free to alter the sound the maestro once approved, and the result is generally pleasing. They’re a little warmer, less harsh.

Also, the couplings are more geared to the casual collector. All the Beethoven and Brahms symphonies have been released on budget-priced, double-disc sets. Now we get Orchestral Showpieces, which features Mussorgsky’s “Pictures at an Exhibition,” Tchaikovsky’s “Nutcracker” Suite and Brahms’s “Variations on a Theme by Haydn,” among other pieces. The French set includes Debussy’s “La Mer,” the suite number two from Ravel’s “Daphnis and Chloe,” and shorter works by Berlioz, Franck, Saint-Saëns, Bizet and others, among them a rip-snorting version of Dukas’s “Sorcerer’s Apprentice” for Fantasia freaks. The performances are well established: love him or hate him, he’s unmistakably Toscanini. Sound quality, however, is a pleasant surprise, and worth exploring – especially if you’re already familiar with the antecedents.