From the Theater Vault Dept.: Life during social sequestration has inspired a torrent of movie-musical watching, the more vintage the better. Which set me to reminiscing about the worthy stage shows I’ve seen that seek to emulate such spectacles. Here’s my review of a 2007 tour of “The Drowsy Chaperone” that landed in Schenectady.

BACK WHEN PORTER AND GERSHWIN AND KERN were cranking out their early scores and Fred Astaire was a stage star only, the American musical had a daffy innocence that took European operetta conventions of mistaken identity and social status conflicts, added a dollop of racial stereotyping and rolled it into a tuneful romp. 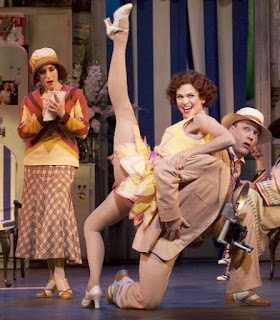 Could escapism be any more compelling, with live actors singing and dancing their way through their problems? Not as far as one lonely apartment-dweller is concerned – and he’s drawing inspiration from a scratchy LP of a musical devised nearly 80 years ago. This musical is, of course, The Drowsy Chaperone, and it boasted a cast of vintage stars whose lives are of just as much interest to the Man in Chair as is the show itself.

He sits in an overstuffed armchair in his cluttered urban apartment, and addresses us in the wry tones of one whose loneliness has long been leavened with wit. Musical theater is his salvation, and he wants to share with us this long-forgotten show. And so, easing his record player’s tonearm into the opening grooves of side one, he notes the familiar crackle – and then the rousing overture. Soon enough, the sound transforms into the music of a live orchestra, and the apartment is invaded by the high-stepping cast.

The Drowsy Chaperone is a high-concept show, but it mines the concept wonderfully. Jonathan Crombie’s performance as the Man in Chair is gloriously funny, as he reveals, through a dizzying cascade of gossip about his favorite show, his disappointments in life. Making the solace he finds in this musical all the more compelling.

The original Broadway production featured real-life brothers as a pair of gangsters posing as pastry chefs, charged with stopping the wedding. Brothers Paul and Peter Riopelle were featured in this tour, stealing their way through their scenes, although they were matched in terms of exuberant energy by James Moye as overblown professional Latin lover Aldolpho, complete with a white streak down the middle of his slick black pompadour.

The title character would have been an Aline MacMahon role in its day; the versatile Nancy Opel is the tippling chaperone who sings the showstopping anthem “As We Stumble Along” even as she triggers the token mistaken-identity subplot.

Although the musical kicks off with a rousing opening, for me the real kick comes early on when best-man George (Richard Vida) tapdances through the number “Cold Feet,” his virtuosity soon matched when Ledbetter’s Robert joins in. By the end of it, the stage literally is smoking, one of many over-the-top effects that works because so much of the show is played at that level.

This is no surprise coming from director-choreographer Casey Nicholaw, who masterminded the footwork in Spamalot. It’s easy for a show like this to slip into mere silliness, which palls quickly, but Nicholaw never lets his actors lose sight of the sincerity at the heart of this show. Improbable as it all is, we want to believe in the sheer fun of it, and this we’re encouraged to do.

Characters in vintage musical often worked in pairs or trios, in roles written for vaudeville teams. That’s the provenance, our Man in Chair explains, of the roles of the vacant Mrs. Tottendale and her butler, Underling. She was Ukulele Lil, and of course produces that instrument by the show’s finale. Georgia Engel originated the role on Broadway, and is a low-key delight, well matched by Robert Dorfman’s weary, spit-take-laden butler.

The score, by Lisa Lambert and Greg Morrison, is an amiable pastiche of jazz-era song styles, and the lyrics, while they rarely reach the wit-level of Porter or Hart, are nicely crafted and draw plenty of laughs.

Few actual ’20s-era musicals see light of day anymore. Perhaps this is the most effective way to resurrect that spirit. It certainly inspired a clever, immensely entertaining show with showstopping performances all over the place.

While we may not share the Man in Chair’s deconstructionist dilemma, and then waltz into our own living-room musical, we can parlay enjoyment of this show into an unembarrassed enjoyment of vintage musicals, those bubbly wonders created before special effects took over the stage.